X-37B Orbital Test Vehicle (OTV), a spacecraft operated by the US Air Force was launched aboard the Atlas-V on December 11, 2012 and is stealthily zooming in orbit rising speculations on its clandestine nature of operations. Designed on the contours of Space Shuttle, X-37B is an unmanned spacecraft with a much smaller size fielding advanced technology in a compact airframe structure. X-37B is modified version in the series of X-37 space craft with the earlier version X-37A being used as an Approach Landing and Test Vehicle (ALTV). The USAF claims that this spacecraft is a technology demonstrator of robotic space plane aimed at validating and corroborating the endurance of reusable space vehicle technology. As on date a total of three X-37B missions have been flown. The first mission launched on April 22, 2010 spent a total of 224 days in space and this was followed up with a second mission launched on March 05, 2011 to complete 469 days in the orbit. The third mission continues to orbit in space and has spent in excess of 625 days creating a longevity record.

The space craft conceived by NASA in the year 1999 was designed and developed as a reusable re-entry spacecraft by Boeing Integrated Defense System. The project in the year 2004 was transferred to Defence Advance Research Project Agency (DARPA) and was accorded a classified status by the US Air force. The X-37B is 8.9 meters in length, spans 4.5 meters in width, and is 2.9 meters tall weighing 4990 kg.[1] This mini-Space Shuttle like space plane is characterized by the likes of both an aircraft and a spacecraft has been designed for a vertical launch using an expendable launch rocket. The spacecraft is designed to operate in Low Earth Orbit (LEO) at an altitude of 175 to 800 km and is slated to operate at a nominal speed of 7.4 to 7.8 km/s at these orbital altitudes.[2] Once released into the Low Earth Orbit (LEO), the X-37B can stay in orbits for a prolonged duration spread over months. It would derive the power from a specially designed solar array and also carries lithium-ion batteries to conserve the propellant fuel.[3] Further, it has been designed for aircraft like maneuverability in space and thus would be capable of changing speeds and the altitude or orbits. As the speed of an object irrespective of mass and size at a given altitude in space is fixed, this space plane can continue in its orbit for an indefinite period till it is commanded to change its course or position. The space craft de-orbits from space under the command from ground and would autonomously re-enter the atmosphere in a glider configuration to land horizontally on a runway. As per the latest data extracted on Aug 16, 2014, the X-37B was found to be in an elliptical orbit with a perigee of 313 km and an apogee of 327 km orbiting at the rate of 15.83 revolutions per day.[4] Further, observations of amateur satellite trackers indicate that the X-37B has made only one or two maneuvers. If these observations are true then the spacecraft would have conserved sufficient reserves of thruster propellant for future maneuverability.[5] The sustenance of X-37B in orbit for such a long duration also suggests that the spacecraft is maintaining a persistent orbital profile.

The X-37B program from the very beginning has intrigued the world on the secretive nature of its mission and profiles. As per the X-37B OTV factsheet displayed on website of US Air Force, “the program is to evaluate and test technology of advance guidance, navigation and control, thermal protection systems, avionics, high temperature structures and seals, conformal reusable insulation and lightweight electromechanical flight systems”.[6] However, majority of these stated assessments involve the evaluations in the de-orbiting phase when the spacecraft will be subjected to the re-entry effects and would be required to glide for a controlled landing on the airstrip. Thus, the rationale for sustaining the spacecraft in orbit for such a prolonged duration defeats the proclamation of ‘developing and validating the reusable space vehicle technology’ by the US authorities.

A space plane can be planned for numerous tasks that would include maintenance of space assets, extend logistic support for improving life cycle of satellites and space stations, carry out ISR missions, act as a platform for insertion of satellites or act as a space weapon platform. As the mission of X-37B has been closely guarded secret, a number of articles and reports have contemplated the use of this spacecraft as a space weapon platform. The payload bay of the OTV is limited by the size of 7 feet by 4 feet.[7] This size of payload bay would not be in a position to accommodate heavy and large weapon systems. While the platform could be designed to carry small automated weapon systems, the functionality of onboard weapon systems would entail additional payloads in terms of sensors and communication equipment. Further, use of X-37B as a weapon platform would not confer any kind of distinct advantage to United States as it is way ahead in space ventures when compared to its closest adversary.

The probability of X-37B acting as an ISR platform is very high as the technologically advanced compact sensor systems can be suitably accommodated in its payload bay. Further, the ground track followed by the space plane is shown below in figure 1 indicates a comprehensive coverage of the middle east countries, the Chinese subcontinent and east Asian subcontinent. While, the exact mission of this space plane would be difficult to judge, the evaluation and experimentations with technology would definitely provide an edge to the United States for its future space ventures. 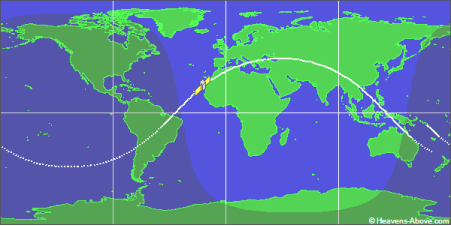