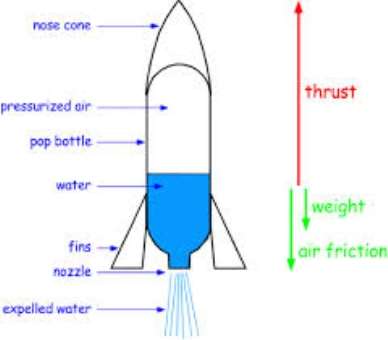 Water rockets tell the story of a wet launching period: the liftoff, height climax (apogee), and the momentous landing all are viewed at an observer’s glance. Of course, some “stories” come out to be more surprising and startling than others because of the ingredients. In a perfect physics world, about any rocket could soar to its maximum potential. Truly this is not the case for the real world, where wind and weather could mean the difference in a water-limited rocket’s success or failure. Water may leak out of the rocket. The bottle may explode suddenly due to hot air or the amount of pressure fixed in its frame. Though anything can hinder a rocket from it’s planned altitude, there are ways through applying water rocket knowledge to counteract it for good: adding modifications to the rocket.

As the question was answered about whether modifications to a two-liter bottle would be beneficial to flight altitude—it is absolutely necessary—the real question springs forward: “What modifications can we use to a plastic bottle?” There are countless variables regarding water rocket propulsion, such as how much water should be applied. Necessity is the mother of invention for designing water rockets, so with basic adjustments to the bottle rocket, testing the improvement would be much easier. Still, though, some modifications may hurt the condition of the rocket. For several pieces of a water rocket design, nifty and thoroughly examined modifications of fins, nozzles, and the bottle itself will be a key factor in its success.

In the livelihood of summer, water makes way for an awe-inspiring experience: water rocket launching. Feeding the excitement of several teachers, children, and parents, water rockets fascinate schools and colleges with its handy demonstration of physics. The process of constructing a water rocket requires a little more than a bottle, nozzle fins, and a creative mindset. However, most participating in the mechanism would hope to watch the rockets as they “send them skyward”, as water rocket enthusiast Barbara Wolcott encourages (screen 1).

How does this specific journey of the rocket—its propulsion—take place? There are always things to consider about constructing a rocket, for with everything there is ways to improve the rocket’s condition. The pounds per square inch (PSI) should be a level pressure for the water to cooperate with Newton’s third law of opposite reaction, and the water needs to maintain a flow with the nozzle–and so on. The launch depends on several variables and add-ons that would enhance the flight experience, such as nose cones. The most dominant components of the rocket launcher—the nozzles, fins, and bottle—act as a major collective force for influencing the rocket’s successful propulsion, protection, and flight height.

One of the most dominant modifications that should be made to all rockets is the nozzle. Brad Calvert claims that a good nozzle produces rapid but brief acceleration, at times lasting “only a few hundredths of a second.” (Calvert 5). A nozzle is simply a mechanical device used for controlling the fluid of the water rocket to allow it to build launching energy. While we may need fins, a durable bottle, and a dependable launcher, a rocket without a nozzle is one that will cause excessive errors like leakages. Thrust, the rocket’s force of action between the water and the bottle, is generated primarily by the nozzle. Truly, the big factor is the nozzle type. Restricted nozzles provide longer flight duration, while an open neck nozzle allows it nearly any time to pressurize, thus creating a problem for some launching tubes.. Also, nozzles depend on length and diameter. For instance, a full bore bottle is the standard neck opening of a PET bottle that is 22 mm long. Other modified nozzles include a Gardena nozzle with quick connectors or a Maxi-Flo nozzle with a large aperture. With these nozzles, the propulsion depends on the nozzle size: larger nozzles run the risk of leakage, thus weakening any chance of a high altitude. A modified nozzle is an excellent start towards a high-quality rocket.

Even a bare bottle can launch off, but countless avenues of error could easily tamper the flight as a whole. This because rockets follow the rules of aerodynamic stability. According to Brad Calvert, the stability of the water rocket depends on the next dominant factor: fins. With overly restricted nozzles, larger fins at the rocket’s rear “are required to counteract the turning forces created at the front” (Calvert 6). Without fins, the rocket cannot balance it’s weight end to end, ruining any chance at a successful air travel. Moreover, if the fins are to be the power of stability, then they must be used correctly. Once the fins’ drag is minimized, they do all the necessary flight work by giving the rocket a nice, straight flight (often the flight will fall nose down as well). Fins make for the most important modification as far as safety goes. Without them, the rocket could ricochet somewhere and cause bodily injury to bystanders.

Fins come in many sizes and shapes, and light tape works great as an adhesive. The ultimate goal of fin construction is minimizing the drag they create by keeping them small and thin. Manilla folders, soft cardboard, and other sturdy materials would work for fins effectively. A cylindrical fin may be “the easiest way to achieve stability with a restricted nozzle rocket” (Calvert 7). Truly, the fins embody a powerhouse for the stability and convenience of a bottle rocket.

The classification of the bottle is critical to the success of the flight also: determining the brand, weight, and dimensions play collectively among other factors to produce the greatest apogee. As water forces out of the rear, the rocket’s weight slowly decreases as a function of time. The air shoving the water forces both the water and air outside the nozzle and creates a force that is equal in magnitude but opposite in direction, propelling the rocket upwards. This would not work effectively without an evaluation of the weight.

Adding weight should be a caution—the lower the rocket weight with a constant water supply, the better launch. Extra mass should be attached to precise areas (such as fins should be placed lower on a larger rocket) for a balanced center of mass. Lightweight adhesives should be applied, but no hot glue should be used as it rips through and softens the bottle’s plastic frame. Using additional water should be a concern as well.. As Leo Singleton put it in his Bottle Rocket Handbook, “water is thrust, but it also adds excess weight” (Singleton 16-17). Balancing between thrust and weight is the best option. Usually 50% of the rocket should be filled with water, regardless of dimensions.

Most people would of course use a two liter bottle for a water rocket base. This brings a higher concern for the fins’ shape. A two liter bottle has a relatively small distance end to end but a relatively large diameter compared to other successful rocket bottles. It is often said that long and thin water rockets “are easier to make stable” than “short and fat ones” (Water- Rockets Science for Hobbyist, Students, and Teachers of All Ages 1). This would be explained through several simulations showing a trend in rocket length and apogee, with increasing length without other modifications. Usually, the water rocket length will be manpower for the flight height, bringing positive correlation to the rocket’s trajectory.

Also, the bottle’s brand would need to be carefully observed. Several experiments from multiple expert rocket launchers, including research done at college sites, yield that generic bottles cause more excessive leaking than brand name bottles. Leakage greatly reduces flight command, and bottles like Dr. Thunder and Mountain Lightning were shown to leak heaps of water (sometimes to its entirety) due to a larger nozzle opening. It’s best to use bottles that are made to contain carbonated drinks, for other bottles are not made to cope with the pressure used. Broken bottles should never be used. They are easier to explode randomly, so making sure the bottle is firm to the touch and durable is a sure way to increase safety to launching.

Undoubtedly, the main factors that would make or break a water rocket’s success would be the fins, the nozzle, and the bottle type. The fins act as a buffer for any unstableness and lower the chances of a crash-worthy bottle. Even more, the nozzle plays the role of controlling the ignition of the rocket. The dominator of the rocket—its bottle frame—is the basis for the concept of water rocket launching. For several water rocket enthusiasts, starting with these modifications would make the best of any experiment of water rocket propulsion and the physics behind it.