As we have read previously, clinically isolated syndrome may develop to multiple sclerosis and because there is no way of determining whether an individual will undergo to develop MS after having an episode of demyelination, making the decision to treat and monitor the ongoing changes very difficult.

There have been arguments whether or not to start disease modifying agents after a clinically isolated syndrome. Those who support the start of these agent following diagnosis of CIS cite the results of some clinical trials that shows that these drugs reduce the risk of developing to MS by one third. A “ treat all early “ approach have been proposed as best to ensure all people who would go on to developing MS do receive the treatment .

The other side of this argument have existing evidence for the disease modifying agent in MS shows only modest short term effectiveness in high risk cases of CIS. Treatment is unnecessary for those who would never gone on to developing MS after CIS.

Four large clinical trials have been conducted to determine whether early treatment following an episode of CIS can delay the 2nd clinical episode, and therefore the diagnosis of clinically definite MS

The goals of the study are:

Subjects have in this study had experienced a single episode of isolated neurological event suggesting demyelination and had multiple clinically silent MRI lesions, which they represent a high risk for a second neurological attack (definite MS) (40, 41).

The results indicated that AVENOX (interferon beta-1a) had significantly delay the 2nd neurological attack, and MRI finding showed that AVENOX can decrease the volume of brain lesions and as well as fewer lesions . Based on this study, the FDA approved that patients with clinically isolated syndrome with MRI detected brain lesions to receive AVENOX .figure(2).(40)(42) 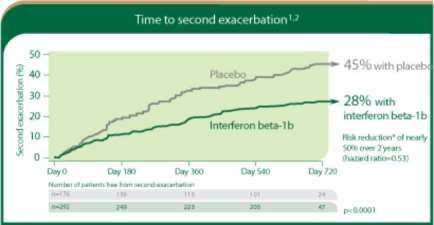 The goals of the study are:

Determine if very low doses of interferon beta 1a (REBIF) delay’s the onset of clinically definite multiple sclerosis in people who experienced only one clinical event but had multiple MRI lesions (43,44). 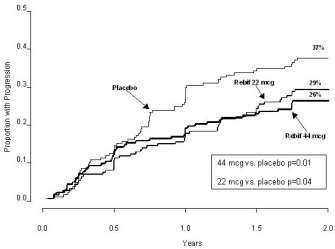 Figure (3 ): compression between the groups receiving REBIF and placebo

The goals of the study:

The FDA has approved that patients who have experienced CIS and have MRI feature consistent with MS to receive the treatment with Betaseron figure (4). 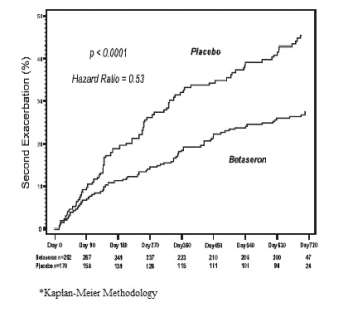 Determine the period of time it takes for subjects diagnosed with clinically isolated syndrome receiving glatiramer acetate ( Copaxone ) to develop a second attack that would confirm the diagnosis of definite MS.

Results indicated that the group who received glatiramer acetate in comparison with the placebo group, has significantly reduced the risk of developing clinically definite MS.

Based on these results, the FDA has indicated to that individuals who have had first clinical episode and MRI feature consistent with MS to receive copaxone as treatment.

Based on these trials , it have been approved the necessity of starting treatments as soon as possible for clinically isolated syndrome patients and those who have first clinical episode and MRI evidence suggestive of multiple sclerosis (48).

The interferons agents should be used with high cautions by depressed patients or individuals with history of depression because of some evidence indicated that these meds may progress the depression symptoms. In patients with depression the physician should give best possible treatment decision to not worsen the depression episodes and in same time have positive effects in the case of treatment purpose (49).

Copaxone (glatiramer acetate): in addition to interferon beta drugs, Copaxone has shown to reduce frequency of relapses and the number of new/active lesions on MRI scan. It’s been used in relapsing remitting type of multiple sclerosis. Until the present, the mode of action have not been discovered. Some theories have been suggested but no scientifically proven theory is discovered.(51)

In conclusions, there is no definite treatment of multiple sclerosis or clinically isolated syndrome in the presence of demyelination of the central nerve system. But, reducing the amount of the lesions, frequency of the episodes and prolonging the period of developing MS in high risk patient is the goals we are looking for.

CIS can be difficult to diagnose or to determine whether or not to start the treatment, and the physician may find a hard time to find the best decision in these cases keeping in mind that the sooner the beginning of the treatment the less progressive the disease is (52).

Given to the heterogeneous etiological factors and often idiopathic characteristic of CIS, there are no clear means of prevention exists. In postinfectious patients with CIS, prevention of the infection is the best means of prevention. In acute disseminated encephalomyelitis, almost 70% of cases are associated with infections and 5% (approximately) with vaccination. acute disseminated encephalomyelitis rates are estimated with 1.5 per millions (2 per million) in association with live measles vaccine compared to 1 in 1000 risk of postinfectious ADE with measles infections, suggesting that vaccines may decrease the risk of post infection complications. Unfortunately, vaccines are not available for all bacteria and viruses (53).