In this experiment, a thin-layer chromatography (TLC) was used to determine the composition of different analgesic drugs which were Aspirin, Ibuprofen, Caffeine, Paracetamol, tea sample and an unknown substance. Chromatography takes advantage of the fact that different substances are partitioned between two phases. TLC is used to identify individual components in a mixture. These chromatography techniques focused on the fact that components of a mixture tend to move at different speeds along the flat surface from the paper used to separate from each other. The results obtained by comparing the spots and after performing the experiment, the unknown was identified to be Aspirin.

Thin-layer chromatography (TLC) is one of the most important techniques in organic chemistry and is used for the rapid separation and qualitative analysis of different substances (Pavia, et. al., 2010). This separation technique is accomplished by the combination of the mixture between two phases: the stationary and the mobile phase. The stationary phase or the absorbent, which is usually silica or alumina, is coated on a supporting material which is either a glass or plastic. The sample is applied to the layer of the adsorbent coated sheet or TLC plate. The mobile phase, or the solvent called the eluant, travels up the absorbent by capillary action (Ault, 1998; Miller, 2005). As the solvent passes through the sample or spot, it shows the effects of separation of the material in the spot. This separation technique is also used to identify if substances are pure and to compare it with other samples. Unknown substances can be also determined by comparing an unknown compound’s behavior with the other known substances.

The group prepared a chamber for the experiment of thin layer chromatography for analgesic drugs. The chamber consists of a filter paper wrapped around the 50 ml beaker with a small opening left for viewing. A 3 ml solvent mixture (25 parts ethyl acetate, 1 part ethanol, and 1 part acetic acid) was added to the chamber and was later covered using a watch glass to provide an atmosphere saturated with solvent inside the container. The filter paper was moistened for the solvent to rise equally.

While the chamber was set aside, a silica gel coated TLC plate was obtained and using a pencil, a very light line was drawn across the sheet, about 10 mm from one end Seven small light marks were made along the line and labelled A to G. Each letter correspond to seven analgesic drugs which are aspirin, ibuprofen, caffeine, paracetamol, sample tea extract collected from one previous experiment, an unknown substance and co-spot respectively. Using a capillary tube, small spots of each sample was placed exactly in the intersection of the horizontal line and the tick marks for each letter to make sure it will not mix with the other samples. The capillary tube was cleaned by using Dichloromethane and it was done three times. For the sample E or the tea extract from the experiment “Isolation of caffeine from tea leaves”, the filter paper that contained the caffeine extracts was rinsed with dichloromethane to be able to place a spot to the TLC. The spots on the TLC plate were allowed to dry for 1-2 minutes. 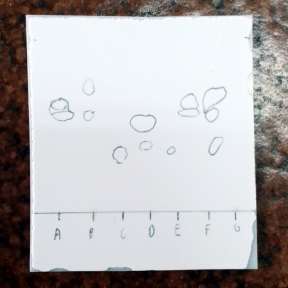 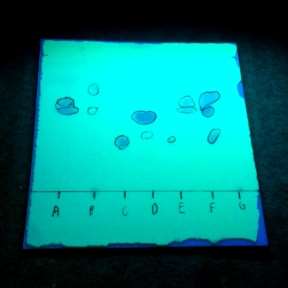 Table 1. Measurement of the distances of the spots in the TLC plate and computed Rf values.

Distance travelled by the solvent: 30.0 mm

The objective of this experiment was to perform thin layer chromatography to test a certain substance of its purity or impurity and also to know the analgesic present in an unknown substance. The results shows that 5 out of 7 analgesics had 2 or more spots which indicates that are impurities or there are different compounds in those analgesic drugs. The different analgesic drugs that were observed to have 2 or more spots were Aspirin, Ibuprofen, Paracetamol, the unknown substance and the co-spot.

Rf values were also computed by the distance (in mm) travelled by the solvent was measured exactly from the horizontal line drawn up to where it was last seen when it moved up. The spots were also measured and for those samples that had 2 or more spots, each spots were measured individually.

The equation used for solving the Rf value is:

For accuracy, the distance travelled by the spot was measured from the horizontal line up to the center of the spot.

Rf values were used to compare the substances and identify the analgesic compound present in an unknown sample. Similarities was observed between Aspirin and the unknown analgesic drug F since their spots are very similar and their Rf values are very close to each other with only a 0.004 mm difference. Also, the results show that the caffeine extracted from the experiment “Isolation of caffeine from tea leaves” is indeed caffeine since spot C or pure caffeine is very similar because the spot produced by the tea extract and this is evident since it is indicated in their Rf values that they are very similar to each other.

In comparing compounds used in the experiment run, the group observed that compounds with the larger Rf are less polar because it interacts less strongly with the polar adsorbent on the TLC plate (Ault, 1998). The experiment went as expected with no unusual events that would have introduced error. The group was able to perform the thin-layer chromatography and to compute for the different Rf values.

Thin-layer chromatography (TLC) was the technique used to determine the composition of various over-the-counter analgesics and the purity of the different substances which were Aspirin, Ibuprofen, Caffeine, Paracetamol, tea sample from one of our previous experiment and an unknown sample. With thin-layer chromatography, it was identified that compounds with the larger Rf are less polar because it interacts less strongly with the polar adsorbent on the TLC plate, and compounds with a smaller Rf values are more polar. It was also observed that the tea sample gathered from one of our previous experiment was indeed pure caffeine because of the similarities of the spots and Rf values of the spot C and pure caffeine. The different analgesic drugs that were observed to have 2 or more spots were Aspirin, Ibuprofen, Paracetamol, the unknown substance and the co-spot. Two or more spots were observed because of impurities or it contains different substances. Lastly, the unknown sample in the TLC plate was observed to be Aspirin because of the similarities of the measurement of the spot and Rf values which only had a difference of 0.004 mm.

To obtain a better result of the experiment, the different techniques can be done. One technique that can be done is a volatile solvent like 25 parts ethyl acetate, 1 part ethanol, and 1 part acetic acid. The TLC plate is very sensitive to different materials or compounds and it is important not to touch the TLC plate to avoid contamination of oil from the hands. In collecting different sample, one should remember to wash capillary tube with dichloromethane not less than three times to avoid contamination. To place appropriate size of each spot so it won’t mix with the other spots. For light/dull colored samples, it is recommended to place spots up to three times for it to be visible. In preparing the chamber, one should moisten properly the filter paper to have equal rising of the solvent and cover all the times the chamber since the solvent is volatile. Lastly, drop properly making sure it falls in an upright postion or the TLC plate should lean to the filter paper and remember not move the chamber in any way to avoid unequal rising of the solvent to the TLC plate.