Theory and the Principles of the Colorimeter

Color of food is not a physical characteristic of food but it is an important quality attribute for foods. This is because color affects the acceptability and perception of consumer for the food and even preference and perception of flavor (Lewis, MJ. 1996). The color is determined by the selective absorption of different amounts of the wavelengths within the visible region. Changes of color can occur during food storage, maturation (ripeness), processing and others.

Colorimetry is the scientific color measurement which used to express color in numerical terms and to measure the color differences between the specimens. The specimens can be paints, textiles, plastics, food and other products that may reflect or transmit color. Colorimeter is an instrument for psychophysical analysis by measuring the amount of light passing through a liquid. This instrument provides measurements that correlate with human eye-brain perception. Besides, the colorimeter is basically like a spectrophotometer but less complex as the spectrophotometer allows selection of any wavelength of light. Colorimeter measures the color through three wide-band filters which corresponding to the spectral sensitivity curves.

A light source creates a beam of light that shines through a sample. The colorimeter then measures the amount of light transmitted or absorbed electronically and provides colorimetric data as tri-stimulus values (XYZ, L, a, b). The design of the Tristimulus colorimetry is about duplicate the response of the human eyes. A light source, three glass filters with transmittance spectra that duplicate the X, Y and Z curves and a photocell are required. This helps to get the reading of XYZ represents the color of the sample. Drawback of XYZ system is not visually uniform, that means one unit of color measurement in one area of the solid was visually different from the same unit in another area. Normally, the values of tristimulus are used to determine the direction and amount of any color difference if a color match is accurate.

The colorimeter provided in this lab is Color Flex colorimeter from the Hunter Lab. Color Flex is a self-contained color measurement spectrophotometer which had been introduced in this lab. It can be used in production or in the laboratory for inspecting raw materials and evaluating the final product. Apart from this, the Color Flex is ideal for measuring powders, granules, pastes, liquids and opaque as it has its port-up or port-forward measurement orientations. The Color Flex require glass sample cup to hold the sample for measure and has a hole to insert the glass sample cup according to its size. Specialized versions of the Color Flex are available for the citrus industry and the tomato industry. These systems include specializes calibration standards and measurement scales appropriate for the industry.

Based on nonlinearly compressed CIE XYZ color space coordinates, a Lab color space is a color-opponent space with the dimension L which for the lightness and the a and b are for the color-opponent dimensions (Hunter, Richard Sewall, 1948). This L, a, b values used in the system are calculated from tristimulus value (X, Y, Z) as the backbone of all mathematical color models. The first system which uses the opponent-color theory is the hunter Lab system (1958). This system states that the red, green and blue cone responses are remixed into opponent coders as they move up the optic nerve to the brain. 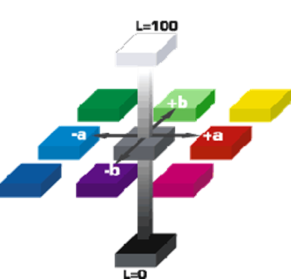 Color has various degrees of lightness and different values. Opponent-Colors Theory has been developed since the XYZ values are not easily to get understand in term of object. This theory is easier for the scientist perceive color, simplify understanding, improve communication of color differences and can be more linear thought out color space.

Based on the basic of the opponent-color theory, the Hunter L, a, b color space is a three dimensional rectangular, where L (lightness) varies from 0 (black) to 100 (white), a which represent red-green axis with positive (redness) and negative (greenness) values, and b which represent yellow-blue axis with positive (yellowness) and negative (blueness) values. The values of 0 for the a* and b* always represent neutral. Once the L, a, b position of a standard color is determined, a rectangular tolerance box can be drawn around the standard.

Today, there are two popular L, a, b color scales which are Hunter L, a, b and CIE L*, a*, b*. A color still has different numerical values between these two color scales even though these two are similar in the organization. In fact, the Hunter and CIE L*, a*, b* scales are both mathematically derived from the XYZ values. Neither scale is visually uniform, Hunter L, a, b is over expanded in the blue region of color space whereas CIE L*, a* and b* is over expanded in the yellow region.

Table 4.1 Tristimulus Values of one-third volume of the Samples.

Table 4.2 Tristimulus Values of two-third volume of the Samples.

From the demonstration, there are three samples which are green beans, red beans and dried red pumpkin seeds are used to measure by using the colorimeter. These three samples are also measure with different volumes. The L, a, b values are recorded.

Next, green bean has showed that it is lightness with the value of L* as 37.13. It is more brightness than the red bean and also dried red pumpkin seed with the reading of L* as 22.89 and 26.46 respectively. In the demonstration, the value of a* of the green bean is 0.57 which means that are green in color in that sample. Besides, the b* values as 23.71 has showed that the green bean samples consists of more yellow color but less blue if compared to the standard value as it’s b* value is positive value and higher than that of the standard values.

In the demonstration of red bean, it show that it consists of lowest lightness with the value L* as 22.89 if compared to others two samples. Thus, we can conclude that the red bean is the darkest among the samples. The a* value of red bean is 14.23 which means that there are red color in the sample and is more red than the standard which has the negative value of a* as -25.11. Moreover, the red bean has b* values as 8.16 and this showed that it consists of more yellow color but less blue color in it.

Pankaj B. Pathare, Colour Measurement and Analysis in Fresh and Processed Foods: A Review. 2012. http://works.bepress.com/pankaj_pathare/3/.