The Fate of the Iberian Lynx

Among the many carnivore species that exist in Europe, the Iberian lynx and the European mink-Mustela lutreola are the only two indigenous species of the continent. In 1992, after series of careful observations and head count by the International Union for the Conservation of Nature (IUCN), the Iberian Lynx was quickly considered “critically endangered,” to see one of them go extinct is inacceptable. Despite the many researches, money and time spent in their protection and conservation, yet not much improvement has been shown in their survival.

The Iberian lynx, also known as lynx of Spain and as lynx pardinus, will be the first member of the feline species to go extinct since the extinction of the Saber-toothed tiger 10,000 years ago. Being part of the wildcat family, the lynx pardinus displays many of their characteristics including long legs, ruff beard-like fur and tufted ears but unlike many other wildcats, the Iberian lynx coat is spotted, colored and shorter.

The Iberian Lynx is known to be a native of Spain and Portugal, mainly in the Southern of the Iberian Peninsula. It is thought that before, they were well-spread all over the area, however, about a century and a half ago, their range has diminish tremendously. Before, their presence was known to be noticeable mainly in the south but also in some northern part of the area. Rapidly within fifty years they started to become extinct in the north Iberian region and an intense decline in density also began to ravage the south. From 1960 to 1990, the decline had become more extreme, and more prominent in south Spain and Portugal with about 80% with only 2% of their previous original range remained occupied. (Ferreras, et al., 2004)

Two surveys were published, one in 1988 and the other in 2008. The first one estimated there were in a very fragmented range, about 800 to 1100 Iberian lynxes (adult) living in nine populations. And the other survey that was done in the more recent years has shown a much lower estimated head count to confirm that their presence were only spotted in the southwestern region of the Iberian peninsula. The total estimated number of Iberian lynx spotted and reported was between 475 to 680 Iberian lynxes living in five populations instead of nine populations as previously reported. In order to protect them, they are being kept in the Donana National Park. The species used to be very common in Portugal, but now it’s thought to be extirpated since their presence was last reported in January 1992. (Delibes, et al., 2000; Ferreras, et al., 2004)

Like many wild felids, the Iberian lynx requires a wide range of terrains, especially below 1300 meters that contain mosaic of closed scrubland that is scattered among open patches of grassland. The reasons for choosing such landscapes are because it provides a great balance between wide-open space and shrub cover. Mostly, lynxes use scrubland as shelter and breeding while other areas that are not totally covered tend to become a shelter for their prey, more specifically their mainstay pray the European Rabbits, also know as Oryctolagus Cuniculus, which is very prominent in these locations. Unfortunately beside the many suitable habitat locations that are available, the species have been extinct from those areas presumably due to the low availability of their main prey (Ferreras et al., 2004). One of the features observed from felids is that they are very solitary and depend on a distributed demographic structure among populations where inbreeding is avoided. This requires passages between areas that meet the criteria of the suitable territory. Those passages allow the lynx to look for new habitats outside of the given endemic territory that fits their living condition. (Pedro Sarmento, et al., 2008)

The Felidae family has many other lynx species in their genus that includes the Canadian lynx (Lynx Canadensis), the Eurasian lynx and the Bobcat (Lynx rufus). The common family traits explain their resemblance and relativeness to each other, for example, although they are very similar in size as the Canadian lynx and the Bobcat lynx but yet smaller than the Eurasian lynx and black shorted-tipped tails. However, the Iberian lynx has some unique features of their own; they have small heads and flat faces, black tufted ears and jowls-bearded appearance and tawny pelage. Those differences have been used recently in the configuration and characterization of their size, shape and intensity of those distinctions in order to determine the degree of diversity genetically within the species. (Beltrán and Delibes, 1993; Cope, 1879; Delibes, et al., 2000; Meachen-Samuels and Van Valkenburgh, 2009) The mortality rate of the Iberian lynx is higher than their reproduction rate. According to a study led by Delibes, et al 2000, 40% of their mortality happens while scattered over the land. The lifespan of the species and their longevity of captive individual are unknown. The oldest Iberian lynx as of date died at 13 years of age.

The Iberian lynx has a straighten-reduced skull, small muzzles; long jaws that give each bite the “force of a smaller canines.” Those features are very beneficial adaptations for the Iberian lynx, they help them in catching small, fast prey and also enable them with the ability to kill their target with a single bite in the posterior region of the neck in order to puncture and damage the prey’s spinal cord, as opposed to suffocating bite practice by larger lynx. (Cope, 1879; Beltran and Delibes, 1993; Meachen-Samuels and Valkenburgh, 2009)

The Iberian lynx is known to be a monogamous polygynous species when observed in the Donana National Park, a close-up metapopulation at its carrying capacity density. With the total availability of suitable territories diminishing, Intrasexual interaction has become very competitive, resulting in the male Iberian lynx to have smaller territories that can be easily defended against other surrounding rivals looking for mates. Therefore, such circumstance turns the Iberian lynx to become more of a monogamy community since the males are forced to put all their strength on defending avoiding access to a particular, exclusive single female of that community. The Iberian lynx often reach sexual maturity within a period of nine months to a year after birth. Though even after sexual maturity the females will not breed until they have secured a set territory of their own. After maturity mating is always the next step, given the fact that females’ estrus peak is in January so breeding usually happens from January to July since it is the only time that the males and females interact. Although males’ territories might overlap with those of the females’, aggressive interaction over mating right is uncommon; however the prominence of the population dictates the fluctuation rates of aggressive intrasexual, the higher the density rate, the higher the population rate will be and vice versa. (Fernández, et al., 2003)

Food Habit The Iberian Lynx is a specialized feeder, its diet consist of 80%-100% Oryctolagus cunicuus. One adult Iberian lynx requires between 700 and 1100 kilocalories per day in order to gain the approximate amount of energy needed to function. By consuming their primary prey, the European rabbit. the Iberian lynx get that amount of energy from one single rabbit. One can imagine that an adult female with younger lynxes will require up to three rabbits per day. Because of their distinctive diet, it makes impossible or hardly do they show geographic variation.

Threat to their Survival

The Iberian lynx species has made it on the top of the red list of critically endangered species facing extinction, according to the IUNC. Many argument and debates are circulating over who or what is responsible for the Iberian lynx decline with barely 150 left in the Iberian Peninsula (see table 1). The three main cause of their death include but not limited to the decline in the Rabbit population, human hunting and human fragmentation. The rabbit, Oryctolagus cuniculus, is wild invasive animal. This rabbit has been flagged as nearly endangered species in the IUNC red list due to the disease myxomatosis, habitat loss and human-induced mortality” (Smith and Boyer 2008). Many Spaniards enjoy hunting. It is part of their way of life also their a way to make a living. Although the government of Spain and Portugal, both have passed laws that prohibits the hunting of the Iberian lynx, many locals still continue those habits. They would hunt them in order to used get their skin to directly sell them in the black market or to use them to make fur coats. Another main threat to the survival of the Iberian lynx is land fragmentation. During the beginning the 20th century when everything including culture start to get influenced by the western world, many rich companies moved to Spain due to low tax or free tax deal. The government allows big companies such as lumber industries to use portions of the iberian lynx habitat to be converted as stands for timbers, or also they have allowed the construction and development of tower-buildings, roads and highways, shopping malls and modern recreational public parks, invading huge part of the forest’s ecosystem and damaging the lynxes’ native habitat. Part of the life cycle of an Iberian lynx is “inter-population dispersal,” they use habitat corridors as passage, so with new roads being built that also take its toll on the species.

Among the many different researches out there, there have not been enough evidence supporting the idea that human fragmentation as the main cause of death. However, according to “Delibes, et al., 2000,” most recent mortalities have been reported to be human induced which includes traffic collisions from roads, illegal hunting (5% annually), caught in traps (6% annually), and forest fires. Therefore according to the IUNC 2006, the rabbit’s decline remains the primary cause of death and extinction of the Iberian lynx. 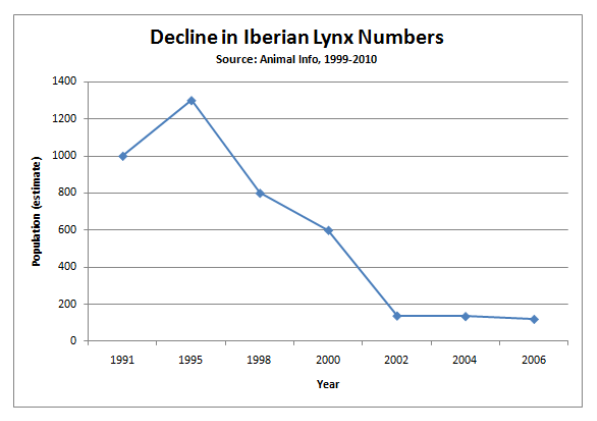 Conservation Status The Iberian lynx is the most threatened species in Europe. This carnivore has fewer than 200 breeding individuals left. They have suffered not only a huge decline in their population rate and a decline in their prey’s availability but also a massive lost of range contraction. The preservation of this species requires immediate intervention from both government, Spain and Portugal accordingly, in order for it to be successful. Many captive breeding programs have begun but little is known about their success and may need to be thoroughly investigated.

The inability of the species to disperse due to habitat fragmentation, has led to their isolation. Habitat fragmentation includes road construction, urban development, agriculture and elimination of corridors. Inter-population dispersal is very important in the species’ life cycle; to disperse they use habitat corridors. Another important step that need to be taken into consideration is the restoration of habitat corridors, their protection is important in the recovery of the iberian lynx, if we need re-establish successful inter-population connectivity Pedro Sarmento, et al., 2008).

Furthermore, poaching remains on the list as one of the main threat of death of the Iberian lynx with 5% of annual mortality. Spain government in 1973 and Portugal in 1974 have long passed laws prohibiting exploitation and trade of the Iberian lynx by humans, because such activities are kept secret, sensitivity program has been put in place to inform the locals not to partake in such activities and report them. (Beltrán and Delibes, 1993)

F. palomares, vegetation Structure and Prey Abundance Requirements of the Iberian Lynx: Implications for the Design of Reserves and Corridors

Palma, L., Beja, P. and Rodrigues, M. (1999), The use of sighting data to analyse Iberian lynx habitat and distribution. Journal of Applied Ecology