Registry is a collection of database that stores configuration setting in Microsoft windows operating system. Each Registry item is accessed by navigating through a designated path of keys and sub-keys. (Wang et al. 2004). As Windows operating system needs to keep track of all changes to configuration of program that run on the computer. Windows registry is the tool as database that stores all information about programs and is controlled by window operating system. The function of windows registry include as a tool to store all data from programs, store program setting include security setting, store setting for OS configuration and hardware devices. The Windows Registry can be accessed using Registry Editor Program. The registry contains two elements: keys and values. Making changes to these values or keys using editor will affect the setting of a particular value control. This paper is to test a registry cleaner to help enhance the pc performance. The test is done by testing by installs registry cleaner into a few pc and record the test data. We also review related journal and conduct survey in order to gather related detail. After that we summarized the data from the data we collected.

New computer systems are always running fast, but as time increases the computer system speed will gradually become slower. When a computer becomes gradually saturated, the computer system speed becomes slower as well inconspicuously(Zhu & Chen 2009). This will create trouble to the users. Nowadays there are about 1 billion of computer users in the world. In another word, nearly every of them will face the computer degradation problem. Most of the user will try a few ways to improve the efficient of pc and one of the ways is by using registry cleaner. Some of the user will also think that registry cleaner is able to remove viruses in the windows registry. The aim of this study is to study the effective of registry cleaner to help improve efficient of the pc and to test that is registry really able to remove virus in the window registry. The comment of user about registry cleaner is also been collected through the survey.

This experiment is done by using one pc for scanning and cleans the errors; three pc is use when trying use the registry cleaner to clean the virus.

For scanning and clean errors, one pc is installed with a few registries cleaner then start the experiment follows the step:-

Step 2: After scan, backup the registry error found (record how many errors found) then clean it

Step 4: Recover back the entire cleaned registry and use another registry cleaner than needed to be test then start from Step 1.

For the clean virus test, virus is been create and put in the window registry. Then uses the registry try to clean the virus. The result is then recorded.

Table 1: Compare between genders with their awareness about PC degrading overtime. 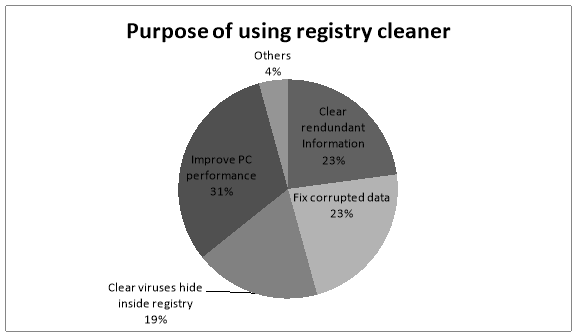 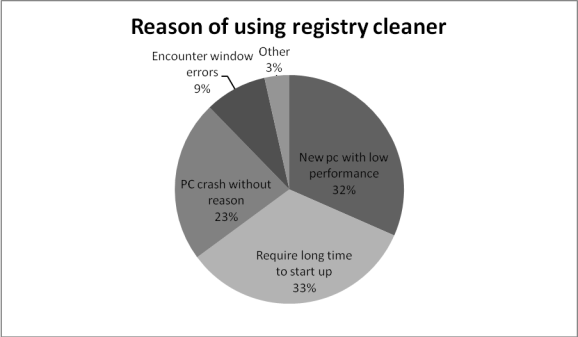 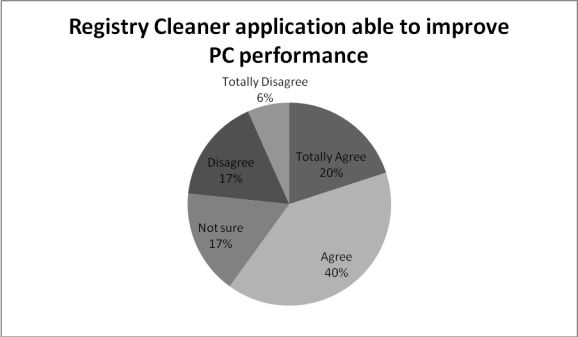 Figure 3: shown the satisfactory of respondents in using registry cleaner to improve their pc performance. 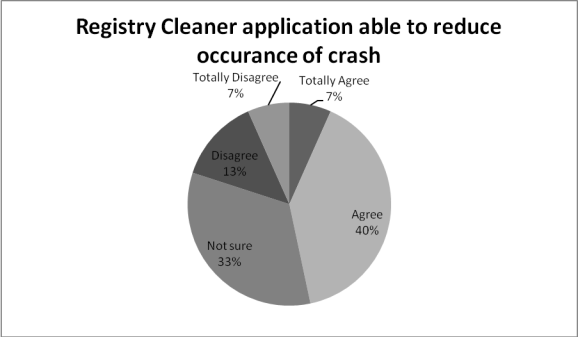 Figure 4: shown the satisfaction of respondents in using registry cleaner to reduce occurrences of crashes. 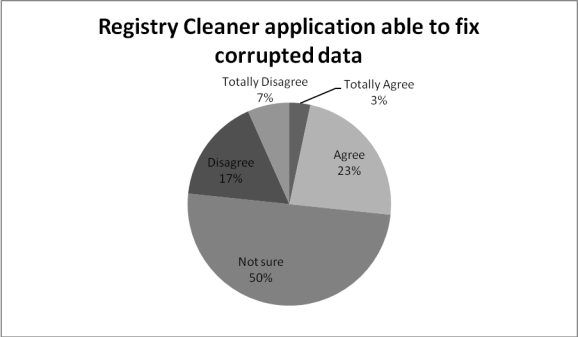 With the table 8 shown above, respondents are not sure that registry cleaner application able to fix their corrupted data in their registry. It may because the output of the function cannot clearly be determined. It cannot be evaluate due to the errors occur inside the registry may not affect the pc performance sometimes. Hence, most of the respondents are not sure with it.

Base on Table 1, we can see that CC cleaner has the fastest speed when scanning but in only can detect very less errors in the registry. From this table we can say that JetClean is the most effective even it is slower when compare to CC Cleaner and Auslogic Registry Cleaner but it is able to detect the most errors.

Nowadays there are many registries cleaner in the market. Different registry cleaner may have different feature and different way of clean the registry. User can use the feature provided by the registry cleaner to improve their pc performance like control the startup program to help in the pc speed (Window startup speed). But for cleaning registry, they have to choose the right cleaner as some cleaner maybe remove some useful registry and cause problem to the user. It is better to backup the registry before running the registry clean as we do not know which program may be affected after the clean. Cleaning registry will only improve the pc significantly and it is most probably user will not see the effect after clean the registry.

This work is support and guide by Mr. Teh Boon Chuan