Study of Hydrodynamic Forces on Multiple Cylinders in Waves

Large offshore cylindrical structures would affect hydrodynamic results due to their wave diffraction and radiation forces. Therefore, in this literature review, investigations of hydrodynamic forces on multiple cylinders are being studied. In order to understand how the hydrodynamic results vary, floating bodies with varying distance are being placed in ideal fluid, where hydrodynamic interactions will cause the influence by the scattered waves and the wave load will differ greatly by the presence of the neighbouring cylinders. Thus, to obtain accurate results, these hydrodynamic interactions are investigated from theoretical predictions, software simulation analysis and model testing.

The development of computer with memory capacity and computational speed increases with the advance in technology. The use of these software simulation analysis helps to analyse the wave interactions between multiple floating bodies in an ideal fluid. The software is dependant on the development of hydrodynamic theories. By using linear wave potential theory, the diffraction and radiation forces could be calculated.

Studies of hydrodynamic interactions of multiple bodies have been on going over the past few decades. Hydrodynamic interaction created are due to wave actions the presence of neighbouring structures. A free floating body may experience six DOF (Degree of Freedom) due to surrounding condition, where three are translations (Surge, sway and heave) and three are rotations (Roll, pitch and yaw). Vertical and longitudinal motions are the primary motions which are often experience by offshore structures.[1] The interaction phenomena is due to diffraction and radiation forces acting on the structures and forces created by the structures. The velocity components and the motion of each body can be obtain by the integration of equation of motion.

The interaction phenomena between two or more floating structures plays important role on the performance of floating structure systems. It depends on the sepetration distance between the floating bodies and also on the direction of flow with respect to the centerline of two floating bodies.[2] This phenomena can be investigated by using both theoretical and experimentally(Model Test). For experimental, using a full scale model tests are desirable but there are limitations due to controlled conditions and the high cost of production. Therefore, the need of associated computation tools for analysing these hydrodynamic forces to attain fast and accurate results. The complexity of multiple bodies solution increases with the amount of elements.(Research_3) Thus, the use of numerical method is highly recommended in this studies.

The knowledge of motion and wave induced forces of offshore mainly involves the structural design and its operation. Offshore structures in sea environment usually encounter environmental loads such as gravity, waves, wind and current. These are the basic information needed to evaluate the interaction of structures through the use of potential theory.(G. Moe, 1996)

Hydrodynamic forces is made up of diffraction and radiation forces. These forces includes the 6 degree of freedom that arises from the interaction of linear waves against any floating structure. In addition, these forces will provide information of hydrodynamic properties of floating structures, such as damping coefficient,added mass and wave excitation forces. The fluid must be assumed to be inviscid, incompressible and irrotational. Currently, there have been numerous theoretical and numerical studies on these problems. As the technology advances, researchers have obtained significant results on the phenomena, which made the study for these problems, such as structure and wave interactions, stability of floating structures aon going research.

Diffraction force is the pressure forces acting around the each structure, but due to multiple bodies and interaction of several bodies, the scattering will affect the results of incident wave.

The motion response of a structure will cause the fluid to oscillate, hence creating pressure fields in the fluid. In order to capture the motion response and the surrounding pressure fields, velocity potential will be imposed. In addition, there are boundary conditions critition to be met. Drag forces are not being considered in the radiation and diffraction problems as it only occurs in slender body phenomena.

With the assumption of having the structure placing in an ideal fluid with zero forward speed. In an ideal fluid condition, the fluid is irrotational and incompressible. The radiation condition should also be satisfied as it is to ensure that the waves propagate away from the structure. From the potential flow theory, it is made known that the velocity potential must satisfy the Laplace equations. Thus, the 3 boundary conditions mention below must be satisfied.

The normal component of the fluid velocity equal to zero

The fluid pressure is equal to the atmospheric pressure and fluid particles will always remain on the free-surface. Pressure will be constant across the free surface. 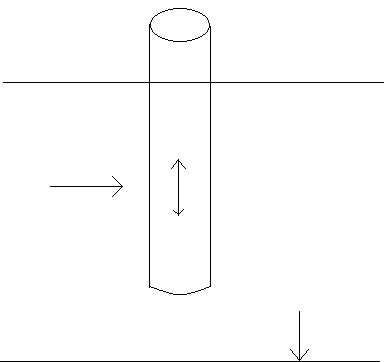 These equations mention below will show the governing equation imposed on radiation and diffraction problems.(Page 44)

, along each component(x, y and z) satisfies the Laplace equation in the fluid domain,

Boundary condition on the sea floor,

The boundary conditions are all set in conjunction with velocity potential. The expression of linear hydrodynamic forces is derived from direct integration of the fluid pressure over the boundary of a body. By using the Green’s theorem, part of the forces can be obtained with the solving the scattering potential. Defining the field point

at any point and the source point

for circulation, rotation and vorticity, the Green funtion will be presented in the form,

. This shows that there will

. This satisfy the free surface condition where velocity potential equal zero on

. Therefore, the solution of the velocity potential for a problem (e.g. force heave) can be written as

This source function is given for infinite water depth problem where

is called the Green function.

By using the Bernoulli’s equation, the total pressure could be fully derived with the use of velocity potential and the body motion amplitudes. Therefore, linear forces and moments are obtain from,

Where it is split into two components: the wave excitation force due to diffraction and forces due to radiation force(In terms of added mass and damping coefficients).

Given we want to find the force at mode j. The linear forces, also known as the first order wave excitation force, the force for mode j is denote as

From Green’s theorem, applying it to

and a component of the radiation potential

It is show that those integrals on the seabed, over the free surface and at the far field disappeared due to the boundary conditions for

on these surfaces. Therefore, upon substituting the equation of boundary conditions, the Haskind relation follows in the form of

By using the equation of motion, the diffraction and radiation problem will be solved.

The boundary value problem is solve, therefore the forces and moments can be evaluate. Panel method is use to solve the boundary value problem which is based on potential theory. Assumptions such that the wave amplitudes of the fluid is small as compared to the cross-sectional dimensions of the body are made. The panelling of the structure is done by plane quadrilateral elements in three dimensional problems.

The solution procedure can be generalized to any modes of motion, where added mass and damping matrix could be found. Solving the diffraction problem can be done by using the boundary condition (equation 5) where

is the incident wave potential. From these solutions, we are able to derive the wave excitation loads such as wave excitation forces (surge, sway, heave) and wave excitation moments (roll, pitch, yaw). Therefore, solving the equation of motion and calculating the flow details such as hydrodynamic forces, by using the expression for velocity potential in terms of a three-dimensional source distribution.

Wamit software is a diffraction/radiation panel program developed to analyse the linear interaction of surface waves with several different types of submerged and floating structures. For this analysis of interaction, WAMIT uses a three-dimensional panel method and also following some theoretical method. By using this software, it can help to define the conditions of the interactions such as, finite or infinite water depth, structures location on the free surface, mounted on the seabed or submerged and whether the structures are fixed or freely floating with the motion of six degree of freedom.

The fluid flow is assumed to be ideal and time harmonic. WAMIT is able to deal with both first order and linearize analysis which includes second order forces. WAMIT is able to focus on the hydrodynamic interaction of multiple body with any restriction of condition of fluid environment. The use of integral equation obtained by Green’s theorem will help solve the diffraction and radiation velocity potentials on the body wetted surface.

WAMIT will be able to evaluate the following quantities:

The method use by WAMIT will be a panel program designed to solve boundary-value problem for the interaction of waves phenomena with the pre-defining the bodies in finite or infinite water depth. Viscosity will not be considered. The time harmonic solutions are being solved for a given steady state incident wave field which is assumed to be represented by a superposition of a particular frequency components in the absence of the body. The boundary value problem will be used in conjunction with the integral equation using Green’s theorem. These integral equation will be solved by panel method for the unknown velocity potential or strength source of the body surface. These integral equations of theoretical method could be found in .