Molecular biology plays a key role and contributes a lot in determining the 3D structure of a molecule be it proteins, nucleotides or any other biological macromolecule. It also helps in finding the target sites when it comes to drug designing. Many structural biology techniques are used in the field of pharmaceutical research. These mainly include X-ray crystallography and NMR Spectroscopy. However, structural biology also includes the help of bioinformatics.

Structure based drug design plays a major role when it comes to pharmaceutical research and also it has advanced a lot over the years. The remarkable discovery of peptidomimetics and nonpeptides proves this. This was done using techniques like X ray crystallography and NMR spectroscopy as well as other computer based methods. One of the widely used tools in structural biology is X-ray crystallography. This is used to determine the atomic as well as the molecular structure of a crystal where the crystalline atoms cause diffraction of X-rays in many specific directions. It is a form of high resolution microscopy. Using this technique, visualizing protein structures at the atomic level becomes easier and helps in understanding its functions. It also gives information about how proteins react with other molecules and undergo changes in their conformation. As well as the process of catalysis with respect to enzymes. All this knowledge is necessary for designing drugs which are meant to target specific sites or are used for industrial processes.

Crystallography, being the most widely used technique may not be successful at all times. With this, NMR comes to the rescue. It helps in elucidating 3D structures of target ligand complexes.

With advances in genome sequencing, protein expressions, crystallography and NMR; these have helped in using protein 3D structure for fast discovery of drugs. The role of structural biology and bioinformatics in this is that they help in the manufacturing of drugs that are target specific and well optimized. Also, due to the determination of structure, fragment binding becomes possible.

For a drug to work efficiently, it needs to bind to the specific site or the target proteins. Using computer for this is a very good technique which finds and optimizes target proteins that are required. For a substance to bind a target it has be extremely specific like a lock and a key. Structural biology methods and molecular modeling are tools that are used in the developments of such molecules. In the process of drug discovery, computational chemistry proves to be a tool of great help. After the molecule has binded to the desired molecule and the binding properties are known, the suitability of the compound can be improved using the computer. The drug’s binding affinity can be calculated digitally using the computer. Also, using these methods it is also possible to calculate if the changes in the structure would lead to any undesirable or toxic properties.

These methods save a lot of time as compared to lab work especially in the early stages of drug designing. Due to this, an increase in the success rates can be observed. 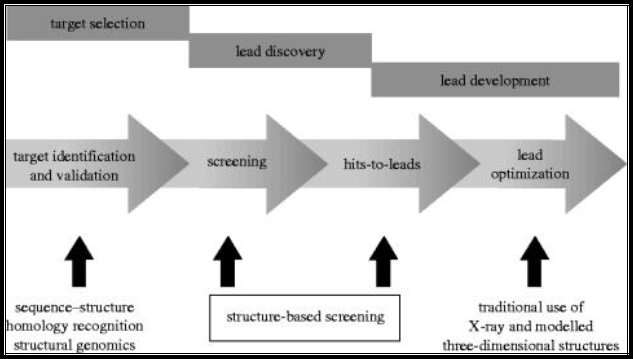 Usage on X-ray crystallography in drug discovery has been present since a long time where 30 years ago the 1st three dimensional structure of proteins were determined. However, not all the pharmaceutical companies resort to this technique as it is considered time consuming and too expensive. A total change in drug design has occurred in the past years, thus using 3D structures in the designing processes. For structure that were not available with X-ray crystallography, other methods were used which included comparative models based on homologues.

Knowing the protein structure is a key component in the process of drug design. It is used in lead optimization which is a process that revolves around the usage of structure for guiding chemical modification of the molecule of lead for giving the perfect fit with respect to shape, bonds and other interactions. Protein structure is also used in target selection; this involves homology recognition but with the recent advances in structural genomics this has become easier. X-ray crystallography is also used in the direct screening of chemical fragments.

Astex Technology has developed “Pyramid”, where fragment libraries are screened in cocktails using X-ray crystallography. Fragment hits that are derived from Pyramid are optimized in order to maintain good ligand efficiency.

NMR spectroscopy was the first structural technique to be made full use in fragment screening.

Usage of NMR spectroscopy on targets that are immobilized helps in binding of small molecules. A process called as Target Immobilized NMR Screening (TINS) has ennumerable advantages; one of them being that a minimum quantity of the non isotopically labeled protein is needed. This method helps in binding in the range of KD values of 100nM to 20mM. If the reference protein is selected carefully, the number of false positive hits that one may get can be avoided. Due to this, maximum valid hits are ensured. These hits can be treated with biological assays. A variety of soluble proteins as well as membrane proteins have been screened. The combination of target immobilization and small screening of fragments using NMR proves to be of immense help in Early Drug discovery.

Structural bioinformatics is a backbone for the identification of new members of supefamilies. Protein structures impart a major information about the families and super families. The proteins that have evolved would be having some common structures or features that they would be exhibiting thus leading to the importance of “homology recognition”. An example of this was the recognition of HIV proteinase which belonged to be a member of the pepsin/renin superfamily. Recognition of distant homologues can be done using methods like sequence-structure matching that are classified as profile methods or threading. Profile methods involve the sequence comparison algorithms using traditional methods. Computer programs like FUGUE aid in this and helps in the recognition of homologues.

Another method used is Threading which fits a probe sequence and evaluates compatibility between the sequenced and the structure that is proposed. This method is powerful for fold recognition. Example of a computer based program is GenTHREADER. After the homologue of the structure is known and identifies, it can be modeled using a variety of procedures. Although structural bioinformatics is helpful, it is necessary to have an accurate experimental structure.

Structures defined by structural genomics programs are mainly of proteins that do not have a known function but they have been identified as proteins only on the basis of their gene sequences. Hence, the need for the development of computerized based methods arises which would identify sites which are involved in the interactions. PROSITE, a sequence motif database identifies the specific residues that have functions. Several attempts have been made to predict the interaction sites using computerized based methods either by identifying high-energy conformations or identifying clefts that can accommodate ligands.

The trait of a target is based on the number of drug like ligands for a target class. Classification of the targets into families has helped in designing compound libraries for particular families. Screening of a small fragments or molecule is needed and this can be done using biophysical assays.

Ligand docking is a method that helps to find the best binding position and orientation. The best docking programmes are successful in dockin 70-80% of ligands in the ligand-protein complexes. A major drawback of this method is that there are difficulties in predicting affinities of different compounds.

Knowledge of the three-dimensional structures of protein targets plays a major role in all stages of drug discovery. Its place in lead optimization is well established with large teams of structural biologists recruited into all major pharmaceutical companies. The success of the method is evident from drugs in use and new ones reaching the market.

But structural biology and bioinformatics show that many key targets for drug discovery are multidomain and multiprotein complexes. Such systems pose significant challenges not only for characterization using structural techniques but also because the inter-protein surfaces are usually poor in distinguishing features.