Water Woes- how can you reduce fresh water scarcity in a country?

The essay is going to introduce that how to reduce fresh water scarcity in Israel. The water is very lacking in this country. Not only for human, but also for the animals and plants live this country. In the other hand, the government of Israel has tried many methods to reduce the fresh water scarcity. Even they had the war for the water. But still is powerless on this way. Per capita water for the people of Israel is only 150 MCM. But in fact the capita water they used have reached 290 MCM. Otherwise, because of the pollution from the industries, the water chemistry in local river is not good. At all, the best way to reduce the water scarcity in Israel is to combine many methods like artificial rainfall, the implementation of each person to save water with reward system, the use of recycled water to solve this problem.

The plan for achieving research purpose for 3 stages. They are first collect all the methods that can reduce the fresh water scarcity. Next, compare these methods and get the finally few methods which are suitable for Israel. Finally, image to put these methods to Israel and compare the data from Israel. Check whether they are suitable for Israel. The most of the information I got was form Bing. Because this website is relatively large and reliable. Furthermore, I chose the resource as possible which has the author and the date of creation. In addition, I

deliberately chose the information on the websites which have different data that I want to use as the sources I used. And I think the name of website which is socialistworker.org is the best website I found. Because it got a lot of useful information. For example, it introduces the terrain of Israel, the history of the methods which the government ever used before and so on.

There are two issues are serious about water scarcity in Israel. One issue is the per capita water for the people who lives in Israel uses too much. In the front of the essay, mentioned the per capita water for the people of Israel is only 150 MCM. But they did not save to use water. So the result of the usage amount is far beyond the standard. If Israel wants to reduce the fresh water scarcity. They must overcome this difficulty. I think that the government in Israel can give some policies. For example, if someone save to use water reach to some standard. He can get some money like this. Another issue is because of about 80% of water in Israel has already reused many times. The quality of the water is not good. In my opinion, Israel must find the other water resource. We all know, Israel face two seas. They can make full use of this condition. In my view, they need to vigorously develop the technology that can convert seawater into fresh water. Although the cost is very high. But if they solved the water scarcity problem, they can get more money return. Now the population of Israel is about 8 million 500 thousand. And the area of Israel is about 25740 square kilometers. Compare Israel with china. We all know that there are a lot of people in china and the per capita water for per Chinese is very low. But the per capita water for Israel people are only 1/4 of china’s per capita water. 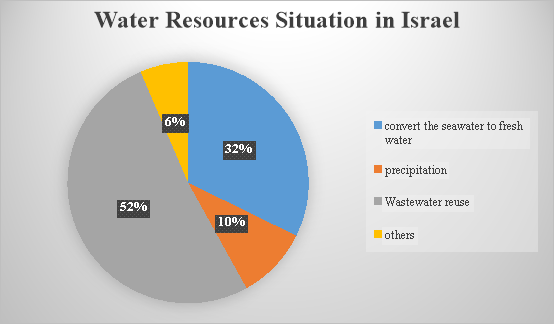 The chart shows the proportionof the water resources situation in Israel. The data came from http://www.jewishvirtuallibrary.org/jsource/brief/Water.html and

In this section, this essay will evaluate the findings in light of the hypothesis firstly. Secondly, discuss the proposed solution. I think the content I wrote in the findings section is more clearly provides the solution. Then, combine the pie graph in the findings section and think about my proposed solution that is find other water resource. Form the graph, we can know that most of the fresh water of Israel is from seawater. This means my proposed solution is working. On the other hand, the problem about the per capita water for the Israel people. This is the most important problem actually. In this issue, the government of Israel has ruled that 100 liters of water per capita per day on average for the people in Israel. Expect the Palestinians. They can only get 70 liters of water per capita per day on average. Furthermore, in some areas, the figure is as low as 20 liters per day for Palestinians. By contrast, Israelis consume up to 300 liters per capita per day. That is unfair. In addition, the local people in Israel are using too much water. They still not pay attention to the importance of water conservation. Although the government always propagandas water conservation. we can do a calculation. Let’s say one local people in Israel use 300 liters per day and expect the Palestinians firstly. There are about 8 million 500 thousand people. It is amount of 255 million liters. It is a big number for a country which is lacking of the water.

In conclusion, the proposed solution that the essay mentioned is suitable for Israel after the comparison of the data and in light of the background of Israel. but actually the government of Israel is doing the solution that the essay given. Just not enough for reach the point that can solve the water scarcity. So, whether can solve the water scarcity in Israel fundamentally is depend on the per capita water the Israel people using. On the other hand, if the government of Israel limits the consume of water for Israel people compulsory too much. They will be unhappy and remonstrant absolutely. So, government must give some other benefits to instead of this. Finally, according to my research, Israel also use many other methods to get fresh water. One of them is artificial rainfall. This is the easiest way. Israel is the famous country that has the lowest natural resources. So, in my opinion, they should use many methods at the same time for saving water. Like use artificial rainfall, the implementation of each person to save water with reward system, the use of recycled water to solve this problem.

Water Resources of Israel(online). Available from: