Authenticity in art can be defined as the real, genuine and true likeness of a piece of art work done by the artist themselves. There are a high percentage of paintings that have been sold and that are waiting to be sold which are fraudulent. This paper will outline the different types of art crimes that are committed, reasons why these art crimes are committed and the scientific techniques that are used to distinguish original and forged paintings.

Many artists have left their identities on their art paintings such as fingerprints and signatures, which help in the aid of authenticating a painting. Personal identification such as finger printing and signatures can be compared to reference samples taken from the artists themselves.

Is it possible to view a painting, with human judgement and detect whether a painting is authentic? Or could using scientific techniques detect how legitimate a painting really is?

There are many art crimes that are committed worldwide. Crimes such as theft, money laundering and forgery all take place in the art world. In the UK, approximately £300 million art and antiques are stolen each year and is the second highest crime rate behind drug dealing now in the UK (1). Art theft has a very high crime rate because it has been known to be difficult to track and because of this, the recovery rate of getting art and antiques back to the owners are very rare. Art paintings and antiques that can be easily copied, are mostly likely to be forged; the more complex a painting, the harder it is for one to forge. Artists that forge paintings not only replicate a painting but they also go about making fraudulent copies of provenances. The certificate of origin is very easy to forge as the history of a painting can be easily fabricated.

There are different scientific techniques that are used to examine art fraud such as Infrared, Ultraviolet, Digital Analysis and Optical Microscope. All techniques used, examine and result in mixed conclusions about a painting. The common aspect of all techniques used can all determine whether an art piece is authentic. Two or more scientific techniques are often used when authenticating art work to ensure accurate findings and support the results of the previous testing. A scientific technique such as IR, is a non-destructive analysis, which absorbs carbon based materials such as graphite and determines the underlying layers of a painting. Small sections of a painting can be enhanced to show the artists original intent and validate whether the painting is an original (2). Using infrared light, wavelengths are absorbed and reflected to show different pigments in the paint, which are used in the underlying drawing, if any.

Another scientific technique used to determine the authenticity of art work is Ultraviolet radiation. This analysis is often the primary technique as it is a quick and inexpensive test that can prove to be very significant. The UV light reveals any change within a paintings’ surface. Ultraviolet radiation of the light reflects the surface of the layer of the painting and shows what condition the varnish layer of the painting is in. Another UV analysis is UV fluorescence. UV florescence can detect varnishes and pigments present on the painting and whether varnishes have been removed. This is an important feature as newer, modern varnishes used on paintings do not fluoresce under UV light compared to the varnishes used in older paintings. Natural resin varnishes were the most commonest varnishes used and these particular varnishes do fluoresce. UV is also an important technique as it can also detect any retouching and over paintings made on a previous painting. Paintings which are under the seen image, when fluoresced, appear darker than the original fluorescent areas (3).

Optical microscopy is a technique which sequences and studies the layers of an art piece. It can also be used to analyse the surface, condition and the size of pigment grains (4). When a painting is viewed under normal light, an analyst can see many details such as brushwork, textures and cracks that are present. Optical microscopy is important as it can investigate whether a painting has been altered by studying a small cross sectional piece of a painting. A cross section is removed from an edge or a previously damaged area of a painting and from this, layers of the painting can be inspected under bother normal and UV light (4). Original paintings that have not been tampered with are expected to have three layers present, when the cross section is studied. These three layers are; the prepared canvas layer, the paint pigment layer and the varnish layer. Paintings which have more than three layers are considered to be altered and questions of whether these paintings are authentic or not arise. An example of an altered painting layer is; canvas layer, paint layer, varnish layer, varnish layer, paint layer and varnish layer. As seen above, this example cannot be the layers of an original piece and so further analysis would be done to confirm its authenticity. 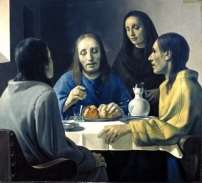 Around the 1930s Van Meegeren composed a plan to forge a large Vanmeer religious style painting. His first forgery was a painting called ‘Christ and the Disciples at Emmaus‘. Meegeren studied the seventeenth – century pigment formulas he was going to use to paint this and ensured he placed the painting on a recycled ‘unimportant’ canvas, which was also painted in the seventeenth – century (5).

After Van Meegeren was confirmed the forger of the Vanmeer paintings from sight, scientific techniques were used for exact confirmation. Such techniques used for determination of authenticity of those specific paintings were X-Radiology analysis, Chemical analysis and Microscopy analysis (6). A scientific technique such as X-Ray analysis is also a non-destructive technique, which detects any underlying substance beneath a surface of a painting, see through pigment layers and show whether there are/were any damaged areas within the art work. This can be used to build up a time line of a particular painting, age and authenticate the work (7). In the Vanmeer case, X-Ray analysis detected a previous painting that laid beneath the current painting due to the amount of lead isotopes detected in the lead based paints that Van Meegeren used to paint the Vanmeer pieces. The isotopes found were compared to the actual isotopes that would have been used if indeed the paintings were painted in Vanmeer’s living days (8). The chemical analysis taken from the painting ‘The Woman taken in Adultery and The Woman Reading Music’, identified traces of cobalt blue used in the pigment of the paint Meegeren used. This was found to be an artificial pigment, which was not manufactured until the 19th century. When the artificial pigment was detected and confirmed not to have been present in the Vanmeer day, it was further confirmation of the forgery committed by Meegeren (6).

In this case the use of scientific techniques was essential when determining whether the Vanmeer paintings were indeed authentic. Without these techniques, visual judgement would not have distinguished the real Vanmeer’s to the fraudulent artwork as they were very good duplicates.

A drawing of a young woman’s head also known as ‘La Bella Principessa’ was discovered in 1998. It was not until many years later, that the drawing was thought to be a drawing by Da Vinci himself and was confirmed to be an authentic copy. The drawing was seen by many people in many different museums and was not thought to have been more than 100 years old. When the examination of this drawing took place, it was thought to be an important rediscovery to the artworld.(9).

IR was one of the scientific techniques used to determine its authorship and authenticity. This technique was used in camera form and by scanning the drawing, it revealed a smudged partial fingerprint on the top left hand corner of the drawing. A forensic art fingerprint expert analysed the fingerprint and matched it to a known fingerprint left by Da Vinci on another piece of his work (9). Another scientific technique used was carbon-14 testing. This was used to analyse and date the paper the drawing was placed upon. The drawing was placed on a sheet of vellum and with carbon-14 testing, it dated back to 1440-1650 (9). This was around the time of Da Vinci era. These two discoveries which date back to Da Vinci era, verified the drawing to be an authentic copy.

Scientific techniques used to authenticating art work as seen above proves to be an important aspect in the art world. If all art work before being sold and entering museums were to be scientifically tested, the amount of forgery done to paintings would reduce considerably more. Without the use of techniques such as IR, UV and X-Ray, the authentication of paintings would not be possible. The methods outlined are all successful methods that were used and are still being used today as they outline important aspects of artwork when examined, and can prove whether a painting is authentic or not. Many scientific techniques used are non-destructive and today the most used scientific technique is Ramen Spectroscopy (10). Ramen spectroscopy is the now the preferred technique than X-Ray as it is a technique which detects organic and inorganic pigments that are used in paints, which can distinguish the timeline of when the pigments were made (10).