Base Design and Equations 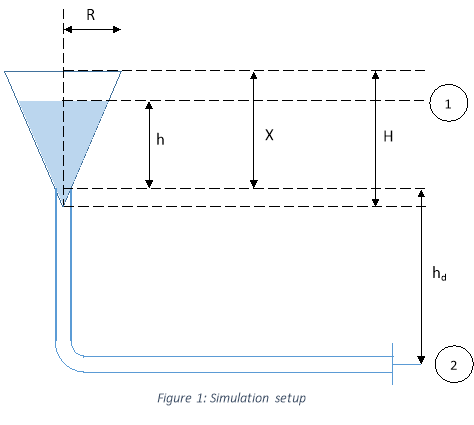 The setup of the simulation is given below. The point at the top of the fluid in the IV bag is denoted with a subscript 1. The point at the exit of the catheter into the patient’s arm is denoted with a subscript 2. Assuming that the patient does not move his/her arm during the procedure, we can set point 2 as a static, whereas point 1 is moving dynamically as the bag empties.

Bernoulli’s Equation in the units of energy is given as:

Setting point 2 as the height of ground, excluding the pumping term and combining pressure terms into a pressure difference, but measuring P­1 and P2 in gauge pressure and assuming P1 to be atmospheric yields the following equation:

Derivation of equations pertaining to the IV bag 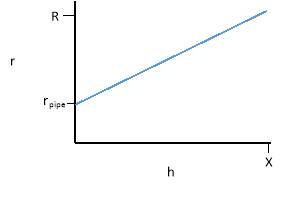 Which has the equation:

And performing a solid of revolution about the h axis:

It is know that

by mass balance assuming no accumulation in the pipe

Finally for the frustum IV bag:

Comparing the Reynold’s number in the pipe and the catheter:

But by mass balance and assuming no accumulation:

Which is always less than one. Therefore if flow in the catheter is laminar, then flow in the pipe has to be laminar too.

For the first case where flow is laminar in both the catheter and the pipe:

The above Equations 1-9 are easily incorporated into matlab functions (Appendix A: Calculations functions).

The first problem that the program must solve is calculating the instantaneous velocity of fluid out of the catheter at any height of fluid in the IV bag.

First the flow in the catheter is assumed to be laminar (this is just a starting point for iterations). The correct velocity of the fluid leaving the catheter is the point here Equation 1 is stable.

Since the equation contains a square root, for the answer to be reasonable then there has to be a positive root. i.e:

is very small, it’s square may be neglected (checked with given simulation values it was on the order of 10-10)

for laminar flow speeds. This means that Equation 10 may be solved by bisection method, giving the instantaneous velocity out of the catheter for a certain height of fluid in the IV bag.

If the maximum and minimum velocities do not generate the proper conditions required for the bisection method (one function value must produce a number greater than zero, and the other must generate a number below zero to imply a root between the two numbers on a continuous function), then the flow velocity must be such that the flow is turbulent in the catheter.

See Appendix B for this programming logic. Comments have been added to aid understanding.

Fluid flow out of the IV bag

In order to calculate how fluid flows out of the IV bag, we set the program to take small time elements and determine the velocity of the fluid flowing out of the catheter for a set fluid height. Since that time element is small, we assumed that the velocity did not change appreciably in that small element. Volumetric flow is the product of linear velocity of flow and cross-sectional surface area, and assuming no accumulation in the pipe for mass balance:

Now we need to know what the height is of the bag for that volume, which is simply the real root that solves Equation 2.

This entire process is iterated for each time element until the bag empties or the fluid velocity leaving the catheter is zero.

This logic may be found in Appendix C.

Finally a matrix is constructed that holds all data of the catheter fluid velocity, bag volume, fluid flow rate and height of fluid in the bag and is concatenated with a time vector. This resultant matrix now holds all of the data of the simulation, which is parsed to the primary class that is running the simulation to produce the graphs, and find numerical values for points on the graphs.

The following data was fed into matlab:

The simulation was run using the following command to retrieve the results matrix:

Solution graphs were plotted as follows:

ylabel(‘Height of fluid in bag in meters’);

Bag volume is row 1, height of bag is row 2, velocity of fluid in the catheter is row 3, flowrate is row 4 and row 5 is the time vector. To find the total time taken for the bag to empty, the command was used:

Similar commands were used to find exact datapoints at any period in time. 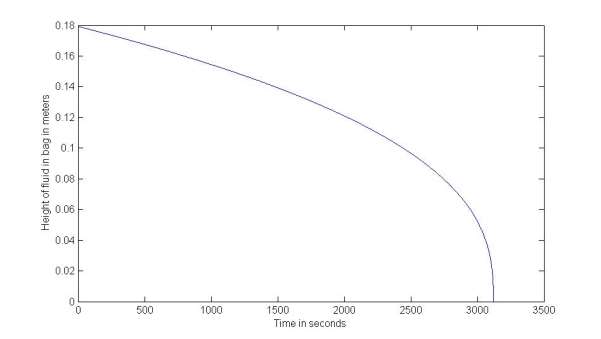 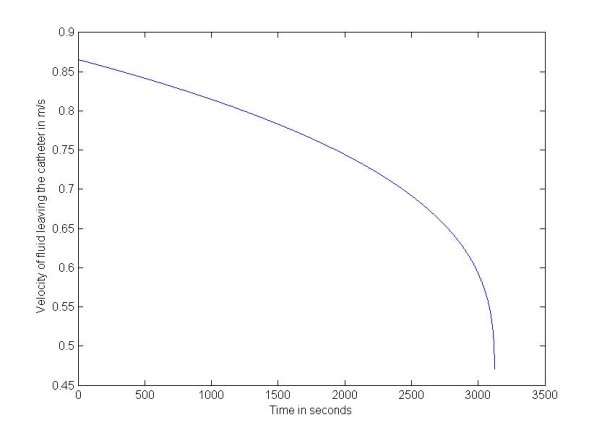 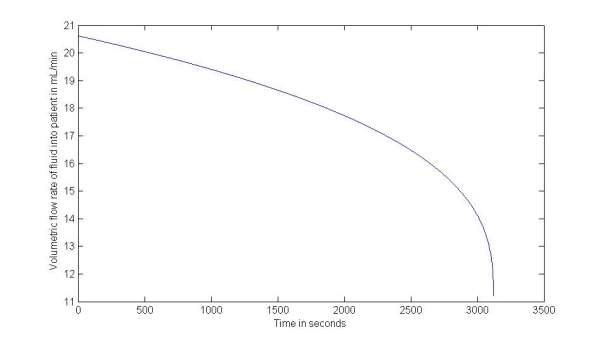 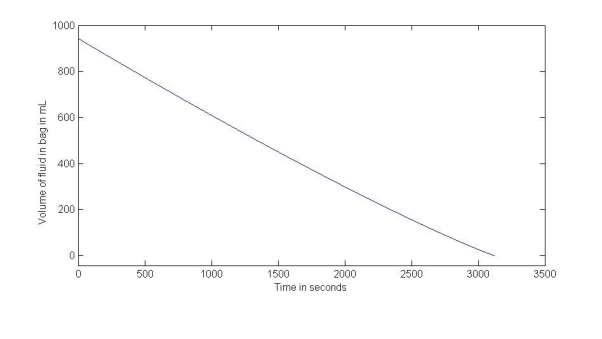 The values of the viscosity and density of the 5% w/v glucose solution – more commonly known as D5W, Dextrose 5 Water or Intravenous Sugar Solution, were looked up from Wolfram Alpha’s material database, and had the values of

The purpose of the simulation was to calculate and plot the graphs as well as answer how long it takes for the bag to drain.

It took 3122 seconds for the bag to drain, or just over 52 minutes. At the last second of the simulation, the height of fluid in the bag was less than 4 millimetres, which corresponds to a volume of 0.045 mL. Figures 3-5 all show a negative exponential function, which is to be expected since the flow rate is a function of the head pressure, which is a function of the conical shape of the bag. Initially, the high flow rate that corresponds with the higher head of fluid does not change very much, as the level of fluid in the cone does not drop significantly quickly. However, after about 2500 seconds (80% through the time of the simulation), the velocity of fluid leaving the catheter begins to change.

While this change is clearly not linear, it is not really significant when compared to the absolute changes in values. From the start of the simulation until 80% through the simulation (2500 seconds), the velocity of fluid in the catheter only changes from 0.8655 to 0.6922 m/s, or 20.02%. It is only in the last period of time just before the bag empties is there a significant change in the velocity of fluid entering the patient, with the final velocity being 0.4707 m/s just as the bag empties, which is itself only a change of 45.62%.

This phenomenon is most apparent in Figure 6, where it can be seen that the volume of fluid left in the bag appears to decant at an almost linear rate (differential of volume/time is flow rate). Only just after 2500 seconds does the steepness of the graph very slightly begin to change upward indicated a slow in the flow rate of fluid leaving the bag.

This phenomenon does, however, make sense. The height that the bag is lifted above the catheter is hd = 1.377 meters. The height of fluid in the bag at the start of the procedure is h0 = 0.1793m, or only 13.20% of hd. The means that the driving force behind the IV procedure (which is the height above the IV bag is placed above the catheter in the patient’s arm) that creates the pressure difference to overcome the venous pressure of blood in the patient’s veins only changes by 13.2%, and remains changed by only 20.02 % during the initial 80% of the procedure – in other words, it doesn’t change by much, and therefore we expect that the flow rate won’t change very much until very close to the end of the procedure, which is what we see in Figure 3.