Roles of MicroRNAs in the Cell Cycle

MicroRNAs are ~22-25 nucleotide non-coding RNAs.(3) It is post- transcriptional repressor of mRNA; control the stability and translation of protein-coding mRNAs. (1, 3). MiRNAs bind the 3’ untranslated region (3’UTR) of target mRNAs. The binding of miRNA- protein complexes to mRNA causes translation inhibition or destabilisation of target transcripts.(1) This is resulting in the downregulation of the protein encoded by mRNA. 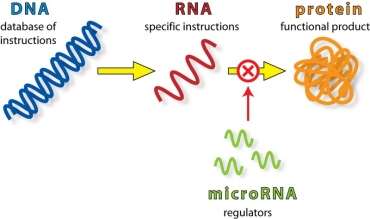 Approximately 30-60 % of the human genome, regulated by miRNAs. As a consequence, any modulations of the target transcript expression, miRNAs can affect various signalling pathways and cellular process such as apoptosis, proliferation or differentiation. Therefore, miRNAs could consider as cancer targets.

Besides cancer, some miRNAs genes cause or contribute in many inherited and genetic based diseases. For instance, miR-26b upregulated in Alzerimer’s disease, (6) miR – 96 causes nonsyndromic progressive hearing loss (7) and miR -184 causes Familial Keratoconus with Cataract.(8)

As miRNAs proposed to control the expression up to one third of all genes and possibly utilised as diagnostic and prognostic marker for many genetic based diseases.(10) Therefore, it is important to evaluate its role in the cell cycle and its dysregulation.

The different roles of MicroRNAs in the cell cycle

The understanding of miRNA has increased over the past 10 years, and particularly the involvement of miRNAs in cancer. Nowadays, cancer is a common disease, which occurs to one third of the population. There are lots of cancer treatments available, however to identify an effective treatment is still challenging.(9) Therefore, it is important to develop a new treatments with less side effect are greatly demanded. A greater understanding of miRNA could possibly lead to better diagnostic and treatment of cancer.(9)

Let-7 Let-7 has an essential role in cell cycle and the differentiation of cell cycle terminals. Let-7 is coded by 12 genes; these are produced from the eight genomic loci. These 12 genes are located at a region, which is frequently deleted in cancer. Throughout the lung cancer examination, it has been showed that a low level of let-7 relates to the poor prognosis. The expression of let-7 induces the suppression growth of cell and human tumour cell lines.(12) Over-expression of let-7 in lung cancer causes the lowered cell division and stopped the progression of cell cycle. Ras, Caspase-3 and HMGA2 genes are targeted by let-7 for controlling tumour growth. Furthermore, let-7 represses number of cell cycle regulator gene: cyclin D1, cyclin A, cyclin D3, CDK4 and CCNA2, CDK6, CDC25A and CDK8. (13)

MiR-15a/16 Chromosome 13q14 region is frequently deleted in more than 50% of the B-cell chronic lymphocytic leukaemia (CLL). This region of the chromosome includes the expression of miR-15a/16 cluster. Further studies have identified that miR-15a/16 is located at the 30 kb region of the loss chromosome in CLL. (14) In CCL patients, about 70% of the patients have miR-15a and miR-16 either deleted or down regulated; same applies to gastric cancer and pituitary adenomas cell lines. The miR-15a and miR-16 target cell cycle regulators such as cyclin D1, cyclin D3, cyclin E1 and CDK6, this causes the cell cycle arrest during the G1 phase.(13) miR-15 and miR-16 in colon cancer cell lines presented with a high level of down-regulated transcripts for gene related to cell-cycle progression. Moreover, the high expression of miR16 which leads to increase G0 and G2 phase accumulation through down-regulating the gene expression of cell cycle, CARD10, CDK6 and CDC27. These evidenced the miR15a and miR16 associated with complex gene expression.(12) 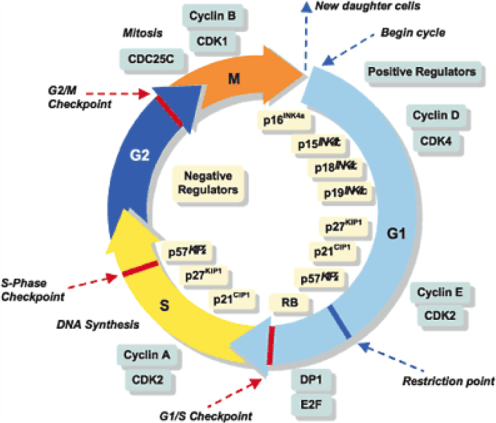 Figure 2: Cell cycle and proteins that are involved in the cycle. (11)

MiR-17/20 The miR-17/20 induces suppression of tumour growth in the breast cancer and human B-cell line; it encodes 6 mature miRs in a 1 kb region. MiR-17/20 target several cell cycle regulators, including E2F, Rb, c-myc and cyclin D1, for the time control of cell cycle. At G1 phase (figure 2) , Cyclin D1 and c-myc are induced and inactivation of E2F1 when bind to Rb. The transition of G1 to S phase of the cell cycle requires the miR-17/20 cluster.(13) The miR-17 family might involve in inhibit or promote cellular proliferation. In a low level of mitogenic stimulation, miR-17 possible involves in the E2F signalling maintenance to be at a level below threshold for proliferation. Furthermore, the missing miR-17-19 cluster has been identified in many malignancies, and disruption of miR-17 expression possible reduces the proliferation of certain breast cancer cell lines. The suppression of irregularly high E2F activation, the apoptosis response might be eliminated by the miR-17-92 cluster, then this function as an oncogene. Subsequently, in various solid and haematopoietic malignancies are found to have amplificated and over-expressed miR-17 family. These have indicated that miR-17/20 play a essential role in cellular proliferation and progression of malignancies. (12)

The regulation of cell cycle by miR-221/222, which it targets the CDK inhibitors. The miR-221 and miR-222 ectopic expression initiate CDK2, aiding the transition of G1 to S phase of cell cycle and p27kip2 and p57kip2 are negatively regulated which lead to increase tumour growth. This is frequently identified in human breast cancer tissues.(13) In addition, miR-221 and miR-222 act as a direct regulator of p27. The over-expression of this cluster increases cellular proliferation and allowed anchorage growth independently. The suppression of miR221 and miR-222 initiated G1 phase arrest in breast cancer cell lines. It is found that miR-221/222 is over-expressed in several human tumors. (12)

Table 1: miRNA genes and clusters that target cell cycle regulators and its deregulation in cancer. (1)

Chronic Lymphocytic Leukaemia (CLL) occurs due to the homozygous or heterozygous deletion of the chromosomal region 13q14.3. MiR – 15a and miR -16-1 are located in this region as shown in Calin et al’s study.(9, 15) This provided evidence that miRNAs might be involved in the pathogenesis of CLL and other human cancers.(9) These genes were found to be deleted in 68 % of CLL patients.(15) MiR-15a and miR-16-1 leads to the inhibition of tumour growth by negatively regulate BCL2; anti-apoptotic gene.(9) They also induce cell cycle arrest at the G1 phase by targeting cell cycle regulators ; cyclin D1, cycline D3, cyline E1 abd CDK6.(9) The deletion of miR-15a and miR-16-1 associated with CLL patients’ phenotypes; the loss of these two genes accelerates B- lymphocytes proliferation by modulating genes’ expression controlling cell-cycle progression.(9) As consequences, CLL clinical features occurs.

MicroRNAs are crucial in the cell cycle. The Mitchell et al’s study has shown that miRNAs displayed high stability in tissue from human plasma. (17) It is possible that miRNA might be useful biomarker to indicate disease state. Moreover, the demonstration of miRNA profiles are potential for distinguishing a development of tumour’s origin and miRNA that acts like tumour suppressor in cancer.(18) From Lu et al’s study, they have demonstrated that there are lower miRNA expression in poorly differentiated as compared to highly differentiate tumour; which is very interesting fact and provide evidence to shoe that possibility that miRNA could utilised in disease diagnostics. (19) Therefore, further researches should carry out to gain more understandings and invent more effective treatment.

4. The image of microRNA [image on the internet]. 2013 [cited 2014 February 4]. Available from : http://www.fireflybio.com/introduction_to_microRNA.

11. Cohen B. The image of cell cycle [image on the internet]. 2013 [cited 2014 February 4]. Available from : http://www.studyblue.com/notes/note/n/neoplasia-vii-cancer-critical-genes-and-familial-cancer-syndromes/deck/6316935.