Production of Wine From Fruits and Value Addition

Wine is a popular drink being enjoyed all over the world. Historians believe that wine was being made in Caucasus and Mesopotamia as early as 6000 BC. Rig-Veda amply testifies that the wine is perhaps the oldest fermented product known to man. It has been made in India for as many as 5,000 years. In developing countries like India 20-30% of fruits produced are wasted due to lack of proper utilization, post-harvest and processing technology. By converting the waste into value added products like wine is a smart solution for this problem (Reddy et al., 2009). Wine is an alcoholic beverage typically made of fermented fruit juice. Any fruit with good proportion of sugar may be used in producing wine and the resultant wine is normally named after the fruit. The type of wine to be produced dictates the fruit and strain of yeast to be involved. Preservatives used in wine making include sulphur-dioxide potassium sorbate, sorbic acid and metabisulphides. Wine is one of the functional fermented foods and has many health benefits. These include anti-ageing effects in red grape skins, improvement of lung function from antioxidants in white wine, reduction in coronary heart disease, development of healthier blood vessels in elderly people, reduction in ulcer-causing bacteria, destruction of cancer cells by protein present in red grape skins, prevention of stroke by keeping the arteries clean by polyphones in red grape skins, decreasing ovarian cancer risk in women and making the bones stronger. Epidemiological evidence has been provided showing that constituents in fruits are beneficial to human health and contribute to the prevention of degenerative processes caused by oxidative stress (Bansal et al., 2009). Fruits contain many different dietary phytonutrients with strong antioxidant capacities; such as: phenolics, which include flavonoids and phenolic acids; carotenoids; and vitamins. Dietary intake of plant phenolics are inversely related to coronary heart disease and act as anti-ulcer, antispasmodic, anti-secretory, or anti-diarrheal agents in the gastrointestinal tract. Certain flavonoids have been shown to inhibit the activity of free radical generating enzymes aldose reductase, which cause diabetic cataracts and tumor growth in modelled systems .The concentration of some minerals in wine is important due to health impact of minerals, their role in the stability of wine, possibility of toxicological risks and food regulations. The mineral profile of wines has also been proposed as a possible fingerprint that could be used to characterize wines based on their geographical origin (Bisson et al., 2002).

Fruits like guava and pomegranate are easy to culture, possess high nutritive value and its products like juices, beverages nectars, etc. are largely appreciated by the consumers. Average energy contribution to total energy intake is estimated to be 10- 20% among adults. These fruits are difficult to keep for long and are utilized either as fresh or processed juice and specialty products. High rate wastage of these fruits necessitates the need for alternative preservation a post-harvest technologies. Evidences have shown how fruit consumption can play an important role in the prevention of many diseases linked to oxidative stress such as cancer, cardiovascular diseases. These biological activities have been mainly attributed to phenolic compounds, such as anthocyanins and elligitanins. In general fruit wines are processed in the same way as wine made from grapes and significant compositional changes take part during wine making. Likewise phenolic compounds are not only health promoting bioactivities but also greatly contribute to the sensory properties of stuff by alternating colour taste (Gurvinder et al.,2011).Fruit juices contain water and 20% carbohydrates, 1% organic acids and trace amounts of organic acids, phenolics, vitamins, minerals and nitrogenous compounds. The sugars, organic acids and phenolics give the juice its flavour, while the vitamins, minerals and nitrogenous compounds are, in many cases, essential to yeast growth and fermentation. Wine has a similar composition, but has much lower levels of sugar (none in dry wines), 8-13% alcohol and a greater range of minor components (Mena et al., 2012).

All the glass wares, strainers and fruits were washed with 50ppm Potassium metabisulfite solutions (KMS). Crushing of the fruits was carried out by hands and pestle-mortar (where required). The fruit paste (must) along with the seeds and the skins was pasteurized at 70-80ËšC for 15 minutes. After pasteurization, the must was filtered using strainers and 500ml of the juice was extracted (Ganjyal et al., 2005).

The required pH for this procedure is approx. 3.5. Initial pHHhhhhHoinjn of the fruit juice was checked using a pH meter. If the pH was found to be above 3.5, it was adjusted by adding tartarate crystals (Oliveira et al., 2011).

After adjusting the sugar concentration and the pH, all the juices were kept for fermentation. For this 1g of yeast was added in 10 ml of distilled water for regeneration. This solution was acclimatized to the juice for 10 minutes and then it was added to the flask containing the juice.

To prevent contamination, 50ppm KMS was added to the fermentation apparatus. The mouth of the flask was fitted with a cork + U-shaped airlock assembly to maintain anaerobic condition. The airlock was half filled with KMS solution. The flask is fit with an airlock to prevent the entry of oxygen and to facilitate release of carbon dioxide and hence maintains the anaerobic condition. All the wine samples were kept at room temperature (25-30ËšC) for batch fermentation.

The culture of Oenococcus oeni was procured from NCIM, pune in freeze dried form. To each of the fermented wine samples, 0.1 ml of the culture was added and kept for malolactic fermentation for 7 days (Edwards et al., 1989).

Initial sugar concentration in terms of Brix was determined using hydrometer. The residual sugar concentration was estimated on daily basis using the DNSA method. Acidity of the wine was determined by titration method. The radical scavenging activity of the wine samples was calculated using DPPH assay. The percentage of ethanol present in the wine samples was estimated using GC.

The residual concentration of all the samples was found to be less than 1g/L and hence there is no chance of contamination at the time of wine storage. (Fig.2) Shelf life will be more.

The fixed acidity in terms of tartaric acid equivalent was found to be highest in pomegranate (5.87g/L) and lowest in sapota and ginger (3.31g/L).(Fig.3) 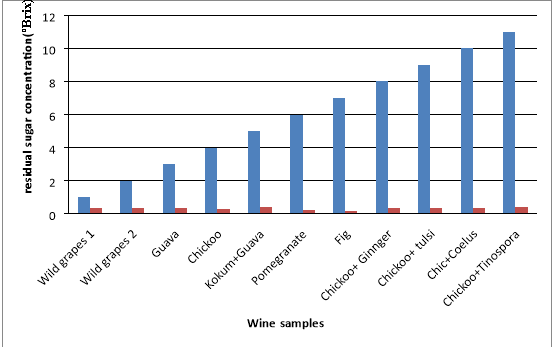 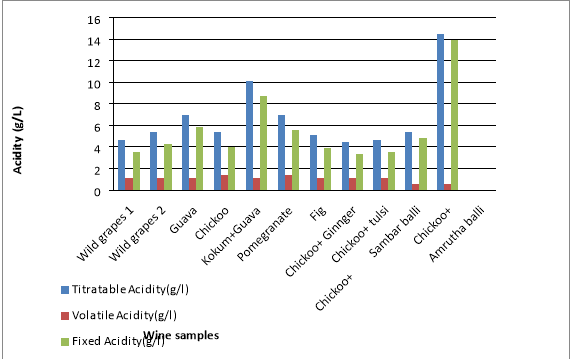 The radical scavenging activity of the wine samples was calculated using DPPH assay and was found to be as follows in terms of ascorbic acid equivalent. The radical scavenging activity for all the samples in terms of ascorbic acid equivalent was found to be in the range 0.15-0.5mg/ml. (Fig.4).

After analyzing the wine that was produced from different fruits and blending combination it was found that the residual sugar concentration was less than 1g/L. The fixed acidity was maximum in Guava wine 5.87 g/L , Wild grapes showed the maximum radical scavenging activity, 0.496 mg/ml and the maximum ethanol content of 10.3% was found in pomegranate. The fixed acidity of most of the fruits was found to be less than 5.5g/L. Quality of the wine can be improved further to match market requireme 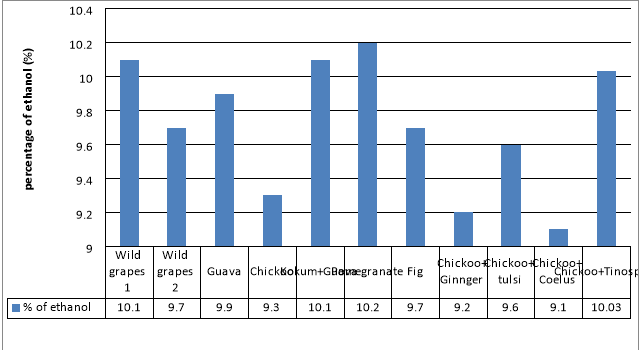