Nowadays, meat consumption is becoming an uncontrollable problem. As a result of high consumption, different kinds of issues occurred. It is possible to sum these issues up in two major groups as health and environment. Red meat consumption linked to increase risk of total, cardiovascular, and cancer mortality. Meat consumption also increases the risk of diabetes. According to new research from Harvard School of Public Health (HSPH) when people eat more meat than usual, their risk of getting diabetes will be increased by 50 percent. In fact, same study shows that people who decreased their meat consumption lowered their diabetes risk will increase 14 percent. On the other side environmental problems are also vital. For instance, it ought to be 60 pounds of water to produce one pound of potatoes while 2,500 pounds of water for a pound of beef.

There are a lot of studies about the relationship between diet and Cancer. According to the searches in England and Germany, the meat consumers are 40 percent more likely to have Cancer than the vegetarians. Again Harvard studies show that people who eat meat everyday have almost three times the colon cancer risk, compared to other people.

There are many reasons for this result. During the cooking meat, some mutagenic compounds are produced like HCAs and they are very dangerous for our health. Polycyclic aromatic hydrocarbons are another reason for Cancer. Especially broiling and grilling meat produce these kind hydrocarbons (Meat Consumption and Cancer Risk). So, these chemicals penetrate our body via meat.

Breast Cancer: The fat comes from animal products, such as meat and dairy products increases the rate of breast cancer. For women who can eat meat daily has an 8.5 times higher risk of this cancer than poorer women who can eat make once a month (Hirayama, 1978).

Colorectal Cancer: Red meat is a great factor for colon cancer. According to another Harvard research, consuming beef, pork or lamb have approximately three times the risk compared to people that avoid these meats (Meat Consumption and Cancer Risk). Mainly, colorectal cancer is another effect of meat consumption.

Prostate Cancer: As with breast cancer, if a man takes dietary fat, especially from animal products, increases his testosterone product and this causes increasing of prostate cancer risk. There are two large studies at Harvard University about this issue. According to one of them, the men who eat red meat everyday have 2.5 times risk compared to the men who eat it once a week (Giovannucci, et al., 1993). Put simply, meat consumption also causes prostate cancer.

Other Cancers: In addition to these cancers, there are several researches about kidney, pancreatic and other kinds of cancer. Commonly, similar reasons such as much meat consumption and much intake of fat increase cancer risk. Otherwise, the same sources claim that vegetarian diets protect us against the cancer (Meat Consumption and Cancer Risk). Thus people have to avoid meat consumption. 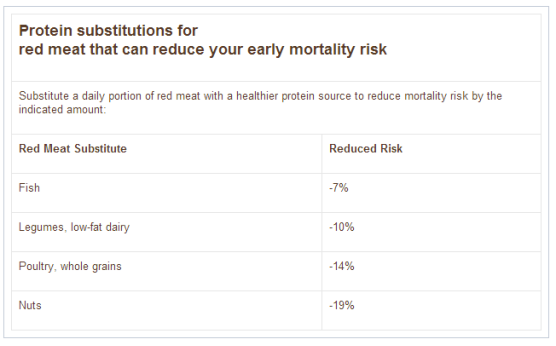 People who consumed high levels of red meat have less-than-healthy body weights. Meat consumption makes them also want to smoke and drink (Sarich, 2013). All these factors are another way to die younger.

Meat consumption has a big impact on the environment. It is considered as the most important reason for the Global Warming. Animal farming is the major source of carbon dioxide. Unfortunately there is no such a thing as sustainable, humane meat production. Changing the source of your meat and preferring farms which seem to be care about ecology do not change the facts. Any farm cannot change the effect of farm animals. The combined emissions of animals are more than all transportation systems. Lindsay Wilson compares the carbon footprints of five different American diets in her article titled ‘The Carbon Footprint of 5 Diets Compared’. As stated in the article, studies allocate diets in five different ways: Meat Lover Diet, Average Person Diet, No Beef Diet, Vegetarian Diet and Vegan diet. It is an important factor that the studies only attach importance to the emissions rates. They do not include storage, transportation emissions.

According to the article, ‘A vegetarian’s footprint is about two thirds of the average American and almost half that of a meat lover’. We can see that there is a huge difference between the vegetarian and meat lover life style in terms of carbon food print. On the other hand vegan diet leads the ecological nutrition as usual.

The health secretary of U.K, Andy Burnham said that ‘Climate change can seem a distant, impersonal threat; in fact the associated costs to health are a very real and present danger’. He emphasizes that everyone should cut back on the amount of meat and meat products they eat. Even going meatless once a week (Meatless Mondays) has a big positive impact on the environment.

Another ecological issue is the water consumption. According to the United Nations’ Food and Agricultural Organization’s report titled Livestock’s Long Shadow (2006) by the year 2050, 2/3 of the World population will lack clean water even for their basic needs. There is a hidden water use behind meat production. It takes 60 pounds of water to produce one pound of potatoes. On the other hand, it takes more than 20,000 pounds of water to produce a pound of beef. According to PETA, all but half of the water used in the U.S, used to raise the animals for food. We would save more water if we do not eat a pound of beef than we do by not showering for six months they say!

As a result, in any case it is beneficial for us to cut back meat. Every small step is important. Graham Hill, the founder of TreeHugger.com states the importance of small steps in his Ted talk titled ‘Why I’m a weekday vegetarian’. At the end of his speech there is a very unique expression which give hope to us: ‘’If all of us ate half as much meat, it would be like half of us were vegetarians’’.

At the present time, high numbers of projects have been developing about meat consumption in USA. Such as Meatless Monday, Eating Better, Tax Meat and Earth Friendly Diet Campaign. These projects are supported by society organizations, government and celebrities. Projects which are considerable are listed below:

It is a project which encourages people not to eat meat on Mondays. The aim of this project is to improve people’s health. The project was founded by Sid Lerner in 2003. It is an association withJohns Hopkins Bloomberg School of Public Health. The reason that they choose Monday is that people are not exactly living healthy during weekends, so not eating meat on Mondays would help them to get back to their usual eating habits. Monday also represents a fresh start. In order to give a support to this project some celebrities are going meatless on Mondays. Such as; Sir Richard Branson (founder of Virgin Group), Denise Richards (actress), Jessica Simpson (actress, singer), Oprah (TV star), Kate Moss (model).

This movement believes that living better starts with eating better. In order to eat better, you need to be informed about food according to them. They share recipes varying on different needs as vegetarians, Low Carb, Sodium and Gluten free diets.

This movement “Tax Meat” is started by PETA (People for the Ethical Treatment of Animals). They are trying to convince the government to put tax on meat because of two reasons. One of them is animal products contain remarkable amounts of cholesterol and it is unhealthy to consume by people. Secondly, studies show that there is a connection between cancer and the consumption of meat.

Take Extinction off Your Plate aims to save the wildlife by helping to decrease the amount of meat consumption across the country. It was launched in 2014 in Tucson, AZ. They started a campaign called Earth Friendly Diet. It basically supports being a vegan and it is trying to attract people into being a vegan. They claim that“By cutting just one-third of the meat from our diets, we can each save as much as 340,667 gallons of water, more than 4,000 square feet of land, and the greenhouse gas equivalent of driving 2,700 fewer miles a year.”

Meat Consumption is one of the oldest habits of human life. Therefore cutting or even decreasing meat consumption is a huge mountain to climb. To convince people not to eat meat, it needs to be put forward certain reasons. Since it is about convincing; taxing the meat or in another words forbidding meat in a way, is not a steady solution. Wealthy part of the society won’t be coaction by taxing while the other part will. So this situation can easily cause social problems. For this reason Tax Meat project maybe a little part of the solution but definitely cannot be the best.

Take Extinction off Your Plate is a kind of limited movement. The project intends to make people vegan. Given this evidence it may sound that it is an agreeable idea but in real it is not. Forwhy to want people be a vegan is leaving an alarming impression. In simple the cure is worse than the disease. When people heard that offer they may remain at bay.

Eat Better Live Better project seems not to be adequate. Although it has some actionary parts, turnout of the project is just advisory, it is not satisfying, not like Meatless Monday. The project of Meatless Monday has a certain message. Those who partaken know what to do, why they are doing it and beyond that it is very easy to do, they don’t eat meat Mondays. Most of the people accept Monday as an opportunity for a fresh start to a new week. Meatless Monday followers are increasing each passing day. It is easier to start a plant-based lifestyle via not eating meat once a week. It will be much easier for willing people to become a weekday vegetarian first, which can be followed by a whole vegetarianism. This simple idea achieves a considerable amount of benefits.

Hirayama, T. (1978). Epidemiology of breast cancer with special reference to the role of diet. Preventive Medicine, 173-195.