Magnetospirillium sp. is a Gram – negative α-proteobacterium which has the ability to move towards the geomagnetic field lines of Earth’s magnetic field. The group of bacteria is collectively called Magnetotactic bacteria (MTB). MTB produce intracellular organelles called magnetosomes which help them in its search for optimal living conditions in complex environment. MTB is a gradient – requiring microorganism that are difficult to replicate in growth medium in the laboratory. In this work the physiological characterization of MTB strain Magnetospirillium sp. VITRJS5 was done as well as a modified growth medium for the growth of Magnetospirillium sp. VITRJS5 was developed. The media components are studied based on the physiological characteristics of the bacteria. The role of electron donors, electron acceptors, nitrogen sources, carbon sources, iron containing compounds, phosphates, reducing agents, on the growth of the bacteria in the MS1 media was studied. The growth of the bacteria in the novel modified MS media was analysed and compared with commercial MTB media such as MSGM (Magnetospirillum growth media) and Schuler’s oxygen – sulphur gradient media. An increase in growth is observed in the modified MS media compared to the commercially available media.

Magnetotactic bacteria are fastidious microorganisms that represent a morphologically and physiologically diverse group of bacteria. The presence of intracellular, membrane bound nano-sized magnetic particles called magnetosomes assists the bacteria in sustaining an optimal position in redox gradient habitats. Magnetosomes are crystals of iron mineral which consist of either iron oxide (Fe3O4) or iron sulphide (Fe3S4). A combination of aerotaxis, magnetotaxis and chemotaxis helps MTB to move away from oxygen in surface water, thus directing them in maintaining an optimal position in and around the oxic-anoxic interface (OAI). Magnetospirillum sp. is the most studied and well understood group of bacteria among MTB. Magnetospirillum sp. was mostly isolated from fresh water habitats and many pure cultures were available in many laboratories around the world.

Magnetotactic Bacteria (MTB) species have characteristic organelles called magnetosomes that contain magnetic crystals. These magnetosomes give them the ability to move in response to the earth’s magnetic field (magnetotaxis). MTB were first observed by Salvatore Bellini in the year 1963 and collected from different freshwater environments near Pavia, Italy [1,2]. The most studied species of Magnetospirillum genus are species of Ms. gryphiswaldense [5], Ms. Magneticum[7], Ms. magnetotacticum [8]. The MTB strains isolated from marine or brackish environments include: the coccoid strains: MO-1[9] , Magnetococcus marinus strain MC-1[10] and Magnetofaba australis (IT-1)[11] ; the vibrioid strain: Magnetovibrio blakemorei strain MV-1[12] and the spirilla Magnetospira thiophila (MMS-1)[13] and Magnetospira sp. strain QH-2[14] ; all of which belong to the Alphaproteobacteria. Most magnetotactic bacteria (MTB) are known to be phylogenetically similar to the Alphaproteobacteria, Gammaproteobacteria and Deltaproteobacteria classes of the Proteobacteria and the Nitrospirae phylum with response to magnetosome formation[6].

Magnetotactic bacteria are known to thrive in sediments or chemically stratified water columns, where they occur mostly at the oxic-anoxic interface (OAI), the anoxic regions of the habitat, or both [3]. Although the detection of these in samples is relatively simple [4], magnetotactic bacteria are a fastidious group of prokaryotes, and special culture conditions are necessary for their isolation and cultivation. There is clear evidence that the availability and diversity of MTB in different environments is majorly influenced by salinity and also, iron availability, temperature and concentrations of sulfur and nitrogen compounds are also seen to be clearly important in the distribution of MTB. The respiratory forms of metabolism of genus Magnetospirillum are either chemoorganoheterotropic, using organic acids and carbon source or electron donors. Mostly Magnetospirillum sp. capable of autotrophic and mixotrophic growth and utilize nitrate as alternative terminal oxygen acceptor. Magnetospirillum are obligate microaerophile that requires oxygen even when nitrate is present in the medium.

Magnetospirillum VITRJS5 (Accession number: KM289194) is a novel MTB isolated from the fresh water sediment. They are spiral in shape and move towards the earth’s magnetic field. They have polar flagellum at each end of the cell. The strain was obtained from Marine biotechnology and biomedicine lab, VIT University. The bacteria were sub-cultured in Magnetospirillum growth media (MSGM) under microaerophillic conditions

Magnetospirillum VITRJS5 was initially grown in previously standardized minimal media MS1 to analyse the growth conditions in the presence of electron donors and acceptors. MS1 media per litre containing K2HPO4 – 850mg, Na2HPO4 – 850mg, NH4H2PO4 – 500mg, MgSO4 – 100mg, FeSO4 7H2O – 5mg, Na2MoO4 – 0.2mg, EDTA – 10mg and Mineral solution 10ml Electron donor and acceptor has to be added accordingly. From the earlier studies, the optimum temperature and pH for the growth of Magnetospirillum is 28°C and 7.5 pH.

2.2 Determination of electron acceptors and concentration of selected acceptor:

For this, 50 ml of MS-1 media was added in five serum bottles and 50 mg of electron donor which in this case is sodium acetate (CH3COONa) was added to each bottle. Then 50 mg of five different acceptors were added in different bottles. These five acceptors are nitrite, selenite, nitrate, thiosulphate and sulphate. Nitrogen was sparged to the media to make it anaerobic, closed with butyl rubber stopper and sealed with aluminium caps. All the anaerobic culturing was performed according to Hungate 1950[15]. The Magnetospirillum VITRJS5 was inoculated to MS1 media. These bottles were kept for overnight incubation in a shaker incubator. Now the different concentrations of selected acceptor is determined .It is done for concentration of 5mM, 10 mM , 15mM, 20 mM and 30 mM . Steps for anaerobic culture was repeated. The absorbance is checked in UV-VIS spectrophotometer at wavelength of 595 nm.

2.3. Determination of electron donors and concentration of selected donor:

For this, 50 ml of MS-1 media was added in five serum bottles and 50 mg of electron acceptor which in this case is nitrate was added to each bottle. Then different donors were added in different bottles. These donors are methanol (250 µl), ethanol( 50µl), glycerol (50µl), pyruvate (82.5 mg/ 15mM) , citrate (221 mg/ 15mM),succinate (202.6 mg/15mM), lactate(110µl/15mM), glucose (135.12 mg/15mM), sucrose (256.9 mg/15mM), Ferrous chloride (121.65 mg/15mM)and thiosulphate (186.1 mg/15mM).Nitrogen gas was bubbled into each bottle for anaerobic condition and sample VITRJS5 strain was inoculated in each bottle. These bottles were kept for overnight incubation in a shaker incubator. Narrowing down the number of donors based on the growth of sample. Different concentrations of selected donor are determined. Selected donors are added in different concentration of 5mM, 10mM, 15mM, 20mM and 30 mM. The steps for anaerobic culture are repeated. The absorbance is checked in UV-VIS spectrophotometer at 595 nm.

MS-1 Media was prepared without nitrogen source (MS-1 media without NH4H2PO4 ) and with the selected concentration of electron donor and acceptor. For this, activity of NH4H2PO4 was checked in different concentrations (5mM, 10mM, 15mM, 20mM and 30 mM) against different concentrations of NH4Cl(5mM, 10mM, 15mM, 20mM and 30 mM).The above described procedure of anaerobic growth was repeated. The absorbance was checked at a wavelength of 595 nm.

2. 5. Determination of reducing for optimum growth:

3.1 Electron acceptor and its concentration for optimum growth:

On incubating the strain M.VITRJS5 in the MS1 media with the various electron acceptors, we obtained various results as seen in table1.

Next, different concentrations of Nitrate are added to MS1 media to see which concentration of nitrate supports maximum growth (as seen in Table 2 and fig.1)

Table 2. Tabular representation of absorbance of different concentration of nitrate 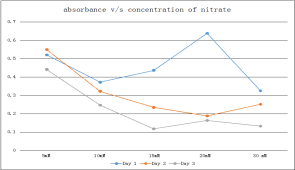 Fig.1 Graphical representation of the growth with different concentration of nitrate

From the above table and fig.1, it is seen that 5mM of nitrate shows maximum growth on all three days. Thus, there is optimum growth seen in 5mM serum bottle.

3.2. Electron donor and its concentration for optimum growth

Later, different concentrations of Nitrate are added to MS1 media to see which concentration of nitrate supports maximum growth (as seen in Table 2 and fig.1)

Table 4. Tabular Representation of absorbance of growth with different concentrations of pyruvate 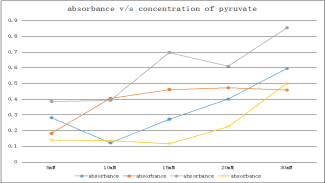 Fig 2. Graphical representation of absorbance of growth with different concentrations of pyruvate 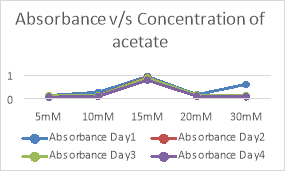 As seen in the above two graphs and tables, 30mM concentration of pyruvate shows highest growth in comparison with the other concentrations of acetate and pyruvate.

3. Nitrogen source and its concentration for optimum growth:

The next step is incubation of M.VITRJS5 strain in MS-1 media(without NH4H2PO4) with Ammonium chloride and Ammonium hydrogen phosphate to determine the better nitrogen source. 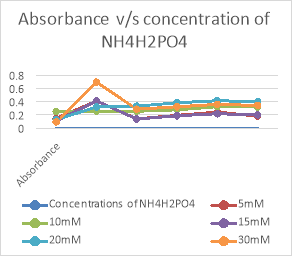 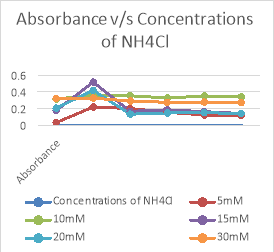 Fig 4. Graphical representation of absorbance of growth with different concentrations of NH4H2PO4

Since it has already been confirmed that pyruvate acts as the best electron donor, the same can act as a carbon source.

Ammonium hydrogen phosphate acts both as a nitrogen source as well as phosphorys source.

Next the M.VITRJS5 strain was incubated in prepared MS-1 media with Sodium thioglycolate and cysteine HCl 4% to determine the better sulphur source. 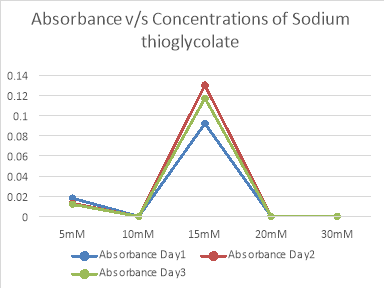 Fig 6. Graphical representation of absorbance of growth with different concentrations of Sodium thioglycolate 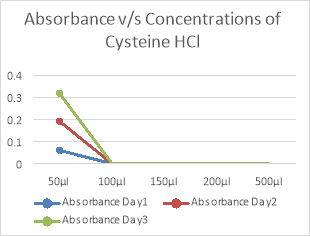 As seen in fig 6,7 and table 8,9, 50µl concentration of Cys –HCl shows highest growth as compared to the other concentrations. There was no growth in other concentrations due to the reducing properties of Cysteine HCl and Sodium thioglycolate. MTBs are microaerophilic and hence, would not grow in anaerobic condition. Sulphur is a reducing agent and hence, would remove oxygen species from the media. Therefore, there is less or minimal growth of the bacteria.

Table 10. Tabular representation of absorbance of growth with different concentrations of Ferric citrate 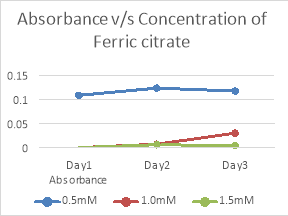 Fig 8. Graphical representation of absorbance of growth with different concentrations of Ferric citrate

Table 11. Tabular representation of absorbance of growth with different concentrations of quinate 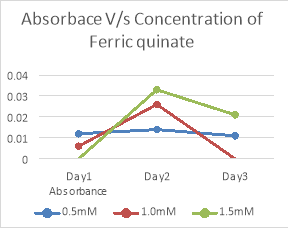 Fig 9. Graphical representation of absorbance of growth with different concentrations of Ferric quinate

As already mentioned above, Magnetotactic bacteria (MTBs) are microaerophilic bacteria which have the ability to biomineralise membrane-encased, single-magnetic-domain mineral crystals (magnetosomes) and hence, cause the cell to orientate along the Earth’s geomagnetic field. These mostly occur in aquatic bodies ranging from saline to freshwater environment.

From the study, the following observations have been noted down:

Also, the growth of the strain was seen to be minimalized in case of Sodium thioglycolate and Cysteine HCl as these are strong reducing agents and thus, would reduce the amount of oxygen species in the media. As mentioned above, these bacteria are microaerophilic and hence, would not grow in sulphur sources (except in 15mM Sodium Thioglycolate and 50µl Cysteine HCl).

Magnetotactic bacteria has the ability to produce magnetosomes which has stimulated and motivated a new field of research involving scientific and biomedical applications of MTB and diverse commercial which could be improved using magnetic nanocrystals. But the main drawbacks to the application of magnetosomes involves the fastidious nature of MTB related to the growth. Thus,it is difficult to culture them on a large scale, and it is important to understand genetic/environmental control for magnetosome synthesis.