The word bacteriophage, which is a name for bacterial viruses, means “eater of bacteria.” These viruses parasitize and kill bacteria. Pioneering work on the genetics of bacteriophages in the middle of the twentieth century formed the foundation of more recent research on tumor-causing viruses and other kinds of animal and plant viruses. In this way bacterial viruses have provided an important model system.

A bacteriophage is a bacterial parasite. By itself, a phage can persist, but it cannot replicate except within a bacterial cell. Most phages possess genes encoding a variety of proteins. (Ringo John)

Bacteriophages, viruses that infect or kill bacteria, were discovered by Frederick W. Twort in England in 1917 independently. Twort observed that bacterial colonies sometimes underwent lysis (dissolved and disappeared) and that this lytic effect could be transmitted from colony to colony. Even high dilutions of material from a lysed colony that had been passed through a bacterial filter could transmit the lytic effect. However, heating the filtrate destroyed its lytic property. From these observations Twort suggested that the lytic agent might be a virus. D’Herelle rediscovered the phenomenon in 1917 (hence the term Twort –d’Herelle phenomenon) and coined the word bacteriophge, which means “bacteria eater.” He considered the filterable agent to be an invisible microbe- for example, a virus- that was parasitic for bacteria. (Pelczar)

Since the bacterial hosts of phages are easily cultivated under controlled conditions, demanding relatively little in terms of time, labor, and space compared with the maintenance of plant and animal hosts, bacteriophages have received considerable attention in viral research. Furthermore, since bacteriophages are the smallest and simplest biological entities known which are capable of self replication, they have been widely used in genetic research. Much has been learned about host parasite relationship from these studies, which have provided a better understanding of plant and animal infections with viral pathogens. Thus the bacterium-bacteriophage interaction has become the model system for the study of viral pathogenicity. (Pelczar)

Bacterial viruses are widely distributed in nature. Phages exists for most, if not all, bacteria. With the proper techniques these phages can be isoalated quit easily in the laboratory.

Bacteriophages, like all viruses, are composed of a nucleic acid core surrounded by a protein coat. Bacterial viruses occurring different shapes, although many have a tail through which they inoculate the host cell with viral nucleic acid.

There are two main types of bacterial viruses: lytic, or virulent, and temperate or avirulent. When lytic phages infect cells, the cells respond by producing large numbers of new viruses. That is, at the end of the incubation period the host cell bursts or lyses, releasing new phages to infect other host cells. This is called a lytic cycle. In the temperate type of infection, the result is not so readily apparent. The viral nucleic acid is carried and replicated in the host bacterial cells from one generation to another without any cell lysis. However, temperate phages may spontaneously become virulent at some subsequent generation and lyse the host cells. In addition, there are some filamentous phages which simply “leak” out of cells without killing them.

There are two types of bacteriophages.

Temperate Phages :- temperate phages do not kill their host and take over its machinery. 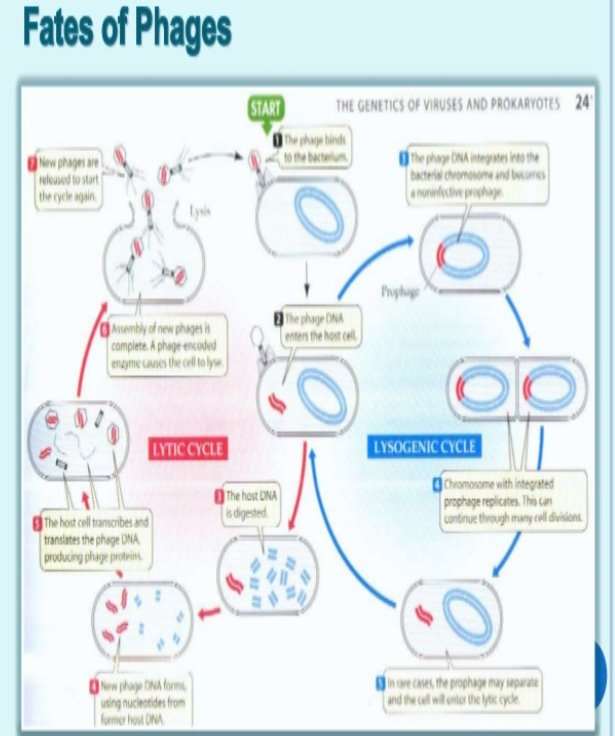 The electron microscope has made it possible to determine the structural characteristics of bacterial viruses. All phages have a nucleic acid core covered by a protein coat, or capsid. The capsid is made up of microbiological subunits called capsomeres. The capsomere consists of a number of protein subunits or molecules called protomers. Figure 1 shows the fine structure and anatomy of a common morphological form of the bacteriophage, one with a head and a tail. 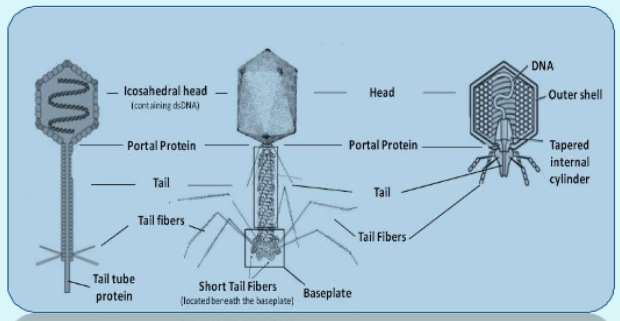 Bacterial viruses may be grouped into six morphological types

Types A, B, and C Show a morphology unique to bacteriophages. The morphological types in groups D and E are found in plant and animal viruses as well. The filamentous form of group F is found in some plant viruses.

Most phages occur in one of two structural forms, having either cubic or helical symmetry. In overall appearance, cubic phages are regular solids or, more specifically, polyhedral; helical phages are rod-shaped.

Polyhedral phages are icosahedral in shape. (The icosahedrons is a regular polyhedron with 20 triangular facets and 12 vertices.) This means that the capsid has 20 facets, each of which is an equilateral triangle; these facets come together to form the 12 corners. In the simplest capsid, there is a capsomere at each of the 12 vertices; this capsomere, which is surrounded by five other capsomeres, is termed as a penton. For example, the φX174 exhibits the simple capsid. In larger and more complex capsids, the triangular facets are subdivided into a progressively larger number of equilateral triangles. Thus a capsid maybe composed of capsomeres but it is still based on the simple icosahedrons model.

The elongated heads of some tailed phages are derivatives of the icosahedrons. For example the head of the T2 and T4 phages is an icosahedron elongated by one or two extra bands of hexons.

Rod-shaped viruses have their capsomeres arranged helically and not in stacked rings. An example is the Bacteriophages M13.

Some bacteriophages, such as the T-even coliphages (T2, T4 and T6), have very complex structures, including a head and a tail. They are said to have binal symmetry because each virion has both an icosahedral head and a hollow helical tail.

Different morphological types of phages are also characterized by having different nucleic acid types. All tailed phages contain double-stranded DNA. The phages with large capsomeres and the filamentous ones have single-stranded DNA. Group E phages have single-stranded RNA. The DNAs of phages are circular under certain conditions. The DNA of phage φX174 is circular both in the virion and in the host cell. The DNA of phage lambda is linear in the virion, but on entering the host cell the cohesive ends join to form a circle.

Infection of bacteria by phages

Most bacteria are susceptible to attack by bacteriophages. A phage consists of a nucleic acid “chromosome” (DNA or RNA) surrounded by a coat of protein molecules. Phage types are identified not by species names but by symbols – for example, phageT4, phage lambda, and so forth. During infection, phage attaches to a bacterium and injects its genetic material into the bacterial cytoplasm. The phage genetic information then takes over the machinery of the bacterial cell by turning off the synthesis of bacterial components and redirecting the bacterial synthetic machinery to make phage components. Newly made phage heads are individually stuffed with replicates of the phage chromosome. Ultimately, many phage descendants are made and are released when the bacterial cell wall breaks open. This breaking open process is called lysis. The population of phage progeny is called the phage lysate.

In the United States therapeutic phages were also produced. Seven phage product for human use produced by the Eli Lilly company in the 1940s including preparations against Staphylococci, Sreptococci, E.coli, and other bacterial pathogen. These preparations contains phage-lysed, bacteriologically sterile broth cultures of the targeted bacteria. These preparations were used against various infections including wounds, vaginitis, acute and chronic infections of the upper respiratory tract, abscesses and mastoid infections. In most of the Western World commercial production of therapeutic phages ceased because of controversy.

But in Eastern Europe and in the former Soviet Union the use of phages continued therapeutically together with or instead of antibiotics. (Sulakvelidze.,et.al,2001)

These two concepts are known as pharmacodynamics and pharmacokinetics. In the concept of body, while considering anti microbial as drugs which includes both normal body tissues and the numerous symbiotic micro-organisms. Here we consider only pharmacokinetic aspect of phage therapy pharmacology.

Pharmacokinectics describes drug’s potential that are sufficient to achieve primary pharmacodynamic effects. This description is distinguished into absorption, distribution, metabolism and excretion components. Drug movement into the blood is absorption, drug movement into other body tissues is distribution, modification of drugs within the body is metabolism, and movement of drugs out of the body is excretion. These four pharmacokinetic aspects have the effect of both reducing and increasing drug densities. In the case of absorption and distribution, drug densities declines due to drug dilution and at the same time drug density increases in specific body compartments. Metabolism results phage inactivation due to phage interaction with immune systems or “activation” such as phage in situ replication. Excretion can reduce of drug densities in the body, it can also increased drug densities in bladder with therapeutic benefits.

The success of phage therapy depends on generation of sufficient phage densities in the vicinity of the target bacteria to cause bacterial removal from the body at some adequate rate. Sufficient densities of phage will increase either to in situ replication which is a active treatment, or a consequence of what can be described as pharmacologically conventional dosing, is called passive treatment. (Abedon et al,2011)

Phages are very specific to target one or a few strains of bacteria. Traditional antibiotics kill both harmful bacteria and useful bacteria such as those facilitating food digestion. The specificity of phages might reduce the chance that useful bacteria are killed when fighting on infection. Phages have ability to travel to a required site including brain. (Wikipedia.org)

Phages are natural antimicrobial agents to fight bacterial infections in humans, in animals or in crops of agricultural importance. Phages have hygiene measure in hospitals and in food production facilities. (Brussow Harald)

Phage is a viable alternative to antibiotics. The collapse of antibiotics and emergence of harmful and drug resistant bacteria, phage therapy starts again and is being reintroduced.

Phage therapy has many potential applications in human medicine, veterinary science and agriculture.

Specificity – Phages are more specific than antibiotics, means one phage will only attack and eat one particular bacteria and no other. Each infection needs a particular phage to treat it. To improve the chances of success phage mixtures are applied or samples can be taken and an appropriate phage identified and grown.

Phages can be chosen to be indirectly harmless not only to the host organism, but also to other beneficial bacteria, such as gut flora, thus reduce the chances of infections. Phage therapy give rise to few side effects.

Phages replicates inside the patient, a smaller effective dose may not even be necessary.

Currently phages are used therapeutically to treat bacterial infections that do not respond to conventional antibiotics particularly in Russia and Georgia. (Prof. Kieth)

As we saw research on phages and a lack of knowledge on phage biology affects on clinical failure.

The emergence of antibiotics wiped out further research on medical use of phages. After many years, a new problem of bacterial resistance to use of antibiotic has arisen.

Bacteria become resistant to drug used in modern medicine by adapting themselves. Problems created in treating patients in hospitals due to the emergence of modified pathogens such as S.aureus, P. aeruginosa, Acinetobacter baumannii and Mycobacterium tuberculosis.

Time required to produce new antibiotic is much larger than the time of bacterial adaptation.

Therapeutic Uses of Phages and Antibiotics

Phage therapy is the therapeutic use of lytic phages to treat bacterial infections. It is an alternative to antibiotics developed for clinical use. Phages are more specific than antibiotics that are in clinical use. This therapy is harmless to eukaryotic hosts undergoing therapy and should not affect normal beneficial flora of the host. Theoretically a single small dose is effective.

Specificity is the disadvantage because specific phage will only kill a bacterium if it is a match to the specific subspecies. Thus, to improve the chances of success, phage mixture may be applied or clinical samples can be taken and suitable phage identified and grown.

In the country of Georgia phages are used to treat bacterial infections therapeutically. (Todar Kenneth)