Introduction. Cold chain system application is one way to preserve quality standard and safety of food products. Cold chain system or usually named with cold chain management is one of cold chain system which designed to guarantee whole process, starting from capture process/harvest, cultivation until product distribution less until it consumed, it will be continuously intact and according to desired functional standard. there are three basic standard: Quality, Safety and Traceability.

One of the most significant constraints is the high level of post harvest losses. Post harvest losses as a result of a poor cold chain implementation in the industry are cited fifteen to twenty percent from the primary producer to retail outlet. See Figure 1

Cold chain Specifically, a supply chain or logistics network is the system of organizations, people, technology, activities, information, and resources involved in moving a product or service from supplier to customer. Supply chain activities transform natural resources,raw materials, and components into finished products that are delivered to the end user. In sophisticated supply chain systems,used products may re-enter the supply chain at any point where residual value is recyclable

A cold chain is a temperature-controlled supply chain; it is a concept resulting from specific needs related to the transformation and distribution of temperature-sensitive products(] J.P. Emond,2008)

To manage the cold chain effectively we need to beware of what the drivers for change are along the food supply chain and be able to adapt to them(W Paul Davies,2003), Professor Davies lists the drivers of change as:

We see this occurring globally as food supply chains compete aggressively with each other and buyers source products whenever and wherever it gives them advantage.

Indonesian Tuna Supply Chain. Supply chains for most of the fish species start from oceans and end up with consumer markets far from thousands of miles. Asupplychainis a network of retailers, distributors, transporters, storage facilities andsuppliersthat participate in the production, delivery and sale of a product to the consumer (Harland, 1996),

In the Indonesian tuna value chain, four main categories of operators can be distinguished: 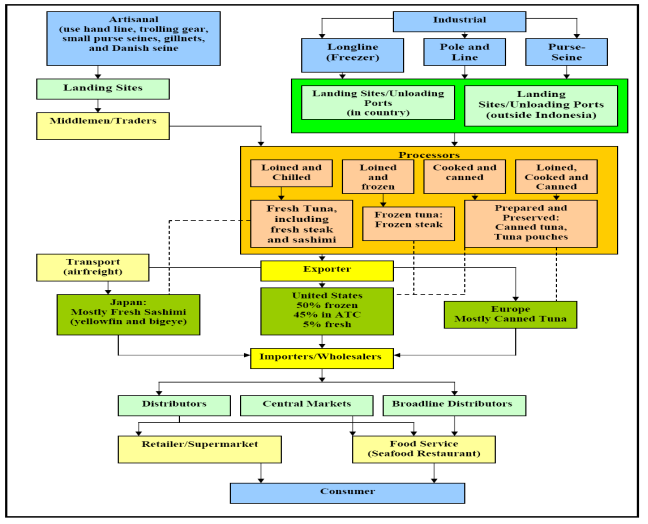 According LEI Wageningen UR (Arie Pieter van Duijn, Rik Beukers and Willem van der Pijl) in CBI Report – The Indonesian seafood sector,2012, The bottlenecks for the Indonesian tuna industry occur at several stages of the value chain. Because pro-cessors and exporters mainly depend on the catches of the Indonesian tuna fleet, it is essential to opti-mise the potential of the fishing fleet. Better handling and storage of tuna can produce more high-quality tuna for export, benefitting processors and exporters too and preventing the need to further exploit tuna stocks. As there are many small landing sites, it is also crucial that tuna landed at these sites can be transported efficiently.

Although several exporters of frozen and canned tuna are already EU certified, there is still potential to help small exporters meet EU requirements. Furthermore, there is a growing de-mand for sustainable and eco-labelled tuna in the EU market, which could have potential for Indonesian ex-porters. Also the lack of traceability throughout the entire value chain implies that support for fishermen, middlemen and processors/exporters is required.(CBI Report – The Indonesian seafood sector, A value chain analysis, LEI Wageningen UR ,2012)

Indonesia was the leader of countries supplying tuna to Japan (mainly yellowfin and bigeye), sending about 20 thousand tonnes per year to Japan’s market. Indonesia only contributes about 2 percent (9,800 tonnes in 2008) of total canned tuna imported to the EU market.

However, MMAF export statistics show that for the total export of frozen tuna (Yellow fin tuna as well as other species), export values were significant-ly higher. In 2010 the export value of frozen tuna to Japan was USD 22m, while exports to the US amounted to USD 18m. Other species that are exported as tuna will most likely concern Bigeye tuna.

Methods. This paper based on paper review and some flelds study, This paper is a continuation of the first paper that presented at an international seminar on december 2nd APTECS 2010

Integrity Cold Chain Systems. According to Jean-Paul Rodrigue,et all,2009, functionally, there are three elements that integrate within the cold chain system:

Bootlenecks for the export Indonesian Tuna

Globalization makes no more will limit both in regional and international, but on the other hand the application of and determination standart food safety is tight.More stringent standart of food safety applied making no other choice for business community fisheries and the whole stack holder, to try to fulfill standart who need, if they want to keep survive,The cases of rejection of fishery on the destination country exports can be seen on a table 1

Totality of the rejection cases on fishery product

In CBI Report – The Indonesian seafood sector,a value chain analysis, by LEI Wageningen UR (Arie Pieter van Duijn, Rik Beukers and Willem van der Pijl).2012, there was some weakness logistics system and value chain, especially of Tuna of fishery sector in Indonesia, four different categories of influencers and supporters can be distinguished:

Six bottlenecks have been identified as a result of the desk study, the field work and the discussions at the strategic conference:

To more clearly can be seen from figure 6 below: 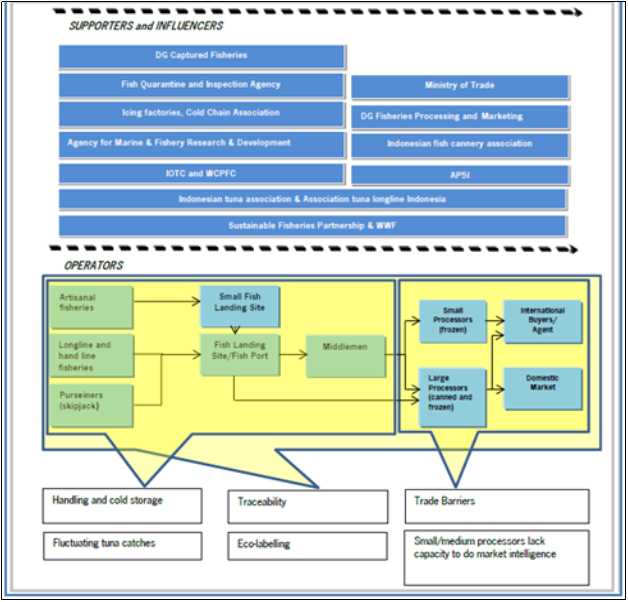 Risk Analysis and HACCP. The following factors which influential are Risk Analysis process (Risk Assessment, Risk Management and Risk Communication) and Hazard Analysis Critical Crisis Point (HACCP) is doing assessment and identification to against threat of potential danger that will arise to every cycle stage((Grasiano.W.Lailossa., 2010)

The new paradigm changes in the application of Risk Analysis and HACCP should also be an important thing in the application of cold chain systems integration., on the other side of synergism and interaction between government and business must go well in the entire cycle from harvest until arriving at the consumer. Figure 7 bellow is the one form of interaction between the government and food company

Conclusion. Research on modeling of cold chain system, tend to make emphasis on cases which partial, means more focus on case model with every partial approach on four primary domain that already says above (standard and regulation, risk analysis modeling and cold chain management modeling/ refrigerated transport modeling), in other side, cold chain system is one cycle which systemic, so that optimization problem from cold chain system cannot be observed as partial from every domain, but it must be holistic and systematic (Grasiano.W.Lailossa., 2010)

The study and review show that New Paradigm to Developed Cold Chain System,must be based on Change the paradigm that integrated and synergism of the whole stack holder who later applied continuously and consequent in the whole process starting from harvest to consumption

The new paradigm of integrated cold chain systems is how to create : Integated model of cold chain systems that have the ability of refrigeration optimally during the process of transport of frozen fish from catching on the sea to arrive at destination exports country. Refrigeration system that has capabilities with the flexibility to continue to maintain the temperature of the products according to standards in charge, able to adapt to external variables that continue to influence will change sometimes even ekstirm due to the path or track that will be going through during the process of refrigerated transport.

The Cold chain systems variabel should have the ability to affect of refrigeration during transport due to a temperature difference, optimization of variables that affected the refrigeration systems due to transport processes that can reduce cooling capabilities so it can not maintain the desired temperature

R. Schuurhuizen, “The domestic chain is still characterized by small-scale fishermen and it has been marginalized by the export supply chain” , 2006.