“Can the Paleocene-Eocene Thermal Maximum (PETM) be used as an analogue for anthropogenically-induced global warming?”

The Paleocene-Eocene Thermal Maximum (PETM) was a global climatic occurrence in the early Paleogene period, spanning across the Paleocene and Eocene epoch overlap at 55.8 Ma (Gradstein et al 2004). Although the exact start and end points of the PETM are disputed, drilling in the North Sea and the Southern Ocean’s Weddell Sea has allowed an accurate duration of the phenomenon to be calculated to around 170,000 years. There is, though, much controversy over these figures and the mechanisms that caused such a climatic anomaly, but particularities aside, this geologically recent warming cycle may be of much use when it comes to understanding our changing climate today. 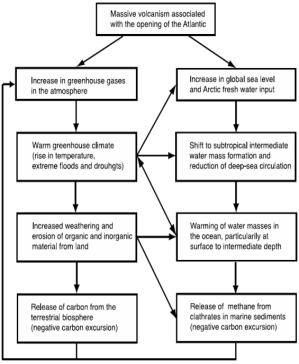 A proposed cause of the PETM thermal anomaly is the release of 1,500 Gt of methane and carbon from decomposing gas-hydrate reservoirs in the terrestrial biosphere, initiated as part of a sequence of events leading on from mass volcanism associated with the opening of the North Atlantic (Winguth 2011). The resulting rise in temperature of around average 5.6°C, and up to 9°C is comparable to extrapolations which predict the temperature shift by the end of the current century (Röhl 2000). Sluijs (2007) explains how the climatological evidence for this comes from Oxygen isotope excursions in foraminifera and terrestrial carbonates, increased levels of Magnesium and Calcium in foraminifera and the poleward migrations of tropical plankton, mammals and terrestrial plants. On the other hand, the inception of the modern warming period was human-induced, and carbon was released from traps much faster than it would have been during the PETM, and has thus accumulated in the atmosphere at a higher concentration in a shorter space of time. The PETM did not surpass a so-called ‘tipping point’ whereby the effects of the warming would be irreversible, whereas the exteremely rapid release of carbon over the course of the past three centuries may have catalysed such a scenario. As a result, it is a reasonable assumption that it may be possible to rely on the PETM as an analogue for modern anthropogenic climate change, due to the analogous effects and root cause, however it must be remembered that the speed of the onset may very well render these expectations void.

There are a number of close similarities between modern and past warming periods which vouch for the validity of using their analyses as an analogue for what is happening at present, and what will be still to come. For example, anthropogenically-induced warming and the natural warming of the PETM both were the consequence of excess carbon in the atmosphere. In addition, the scale of temperature rise during the PETM is consistent with predictions for the end of the current century, at around 6°C (Röhl et al 2000). Applying the principle of uniformitarianism, the climatic reconstruction of the conditions throughout the PETM can be useful in aiding us to understand what is happening and the effects we can expect. As the globe warms up, consequences occur such as the thermal expansion of the oceans and the release of terrestrial carbon which also have knock-on corollaries as is seen today (Hayward 2011); this is shown in Figure 1. Furthermore, due to the geologically relative recent occurrence of the event, it is more reliable to construct climatological models and replicate what the potential consequences of the warming may be. This is another advantage in using what we know of the PETM as an analogue for what is happening to the planet at present. 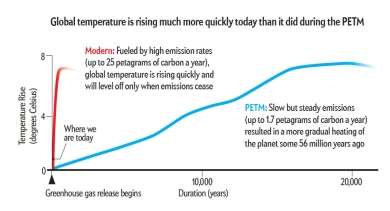 Modern Global Warming is, however, remarkably different from the rise in temperature associated with the PETM. Whilst the rise of the temperature today is comparable to the Late Paleocene at around 6°C (Röhl et al 2000), the onset of this thermal spike occurred naturally and at equilibrium climatic state. The industrial revolution and the resulting vast amounts of coal, oil and gas which have ended up in the atmosphere as CO2 since the early 1800s have bought about the temperature shift in a very small fraction of the time than it did during the Paleogene. Figure 2 puts this into perspective. The anthropological extraction of carbon reservoirs has depleted their stratigraphic storage much quicker than would be the case naturally through uplift and erosion. “PETM: Global warming, naturally” (2012) states around 5×109 tons of Carbon was released into the atmosphere each year during the PETM, whereas the figure for 2010 alone is 35×109 tons. Such rapid accumulation of carbon in the atmosphere has never been reconstructed within the last 20 million years, and current atmospheric concentrations of CO2 are higher than at any point within the last 800,000 years (Hayward 2011). With reference to Figure 1, the knock-on consequences of each occurrence within a warming cycle are numerous, and the simultaneous onset of several of these is largely uncharted territory. A tipping point could theoretically be reached whereby global temperatures spiral out of control because of this, and drawing from the reversal of snowball earth periods, such an extreme planetary climate could take many millions of years to return to optimal conditions, if ever again. When considering the centuries that are required to transport all heat to the deep ocean and the millennia needed to remove excess carbon from the atmosphere, the consequences of climate change will still be materialising for generations and will likely last for longer than the 170,000 years it took the earth to remove all excess CO2 from the atmosphere. By 2300 sea levels are expected to be up to 0.8m higher than 1980 levels, many more species will be extinct and the poles will have considerably smaller ice sheets if still in existence, and one can only assume the repercussions will be more severe than the altered migration patterns and dinoflagellate calcite levels of the PETM.

In conclusion, the PETM can be considered as an analogous representation of the warming of the globe. In the case of anthropogenic climate change however, the rate of carbon accumulation simply means that the potential consequences of the climatic shift are too unpredictable in years to come. Using the PETM as an analogous model for the current period of warming may suffice for the present, but future outcomes are uncertain as atmospheric carbon continues to accrue at an alarming rate.