The purpose of this experiment was to create an artificial ecosystem in order to observe the natural changes in life. The column was put together including a terrestrial and an aquatic section to see how the two interact as one. Plants, insects, and fish were added to the column in order to observe how oxygen is produced, used and recycled. The eco-column experiment was done in order to familiarize us with testing water for pH, temperature, and dissolved oxygen levels. Along with familiarizing the participants with the process and meaning of certain environmental tests the eco-column simulation helped to show how life and nature works. It gave insight to how one element affects another in nature. The eco-column simplified the mast works of nature.

Two liter bottles were brought in and the bottoms were cut out of all but one and the tops out of all. After cut, the bottles were assembled together and taped. The eco-column was composed of three different sections; aquatic, decomposition and terrestrial. There was a filter inserted between the decomposition and the terrestrial chambers in order to catch the soil that would try to make its way down to the aquatic chamber. The eco-column was first assembled September 24th. For the aquatic chamber water was brought in, nearly a gallon, from local lakes, ponds, and creeks. For the decomposition and terrestrial the soil was taken from local forest. After assembling the column and inserting water and soil there were instructions to insert rocks, sticks, and insects. After assembly was complete test were done. The aquatic chamber went through various test including turbidity, dissolved oxygen, pH and temperature, along with subjective test such as odor and color. Observations were completed, as well as soil test. At first the columns were tested every week, but after 3 weeks the teacher instructed the class to complete test and observations every two weeks versus every week. The teacher gave out aquatic plants in order to help with dissolved oxygen levels. Once the dissolved oxygen levels and temperature became constant and safe fish were placed into each of the aquatic chambers of the eco-columns. The eco-column experiment lasted around three months; from September to December. The tests were completed five times. Dissolved oxygen and temperature were both tested using a probe in which was placed in the water. The pH levels were tested using a a special paper stick pH tester. In order to test turbidity water samples were taken from the aquatic chamber and put in a machine which read the level. The soil test were completed by taking out a cup of soil from the eco-column the week before. They were then tested for various elements such as; pH, nitrogen, potassium, and phosphorus by putting them in the directed containers in which powder was added to test for the specific element. The eco-column was taken down on December 3rd. The water and soil was dumped outside of the school and the bottles were given to our teacher in order to be used again.

The table below shows how the dissolved oxygen, temperature, and pH levels changed throughout the experiment. It is visible that the pH levels and temperature remained fairly constant over time. The temperature remained around 21 degrees Celsius and the pH levels neutral, 7. The dissolved oxygen levels however were constantly changing. The first day of our experiment, September 24th, the dissolved oxygen level was 1.0. At that level the water was unsafe for marine life, such as fish. There was barely any oxygen circulating throughout the chamber. A week later the level was up to 7.6. Our teacher stated that the range of 7 is a safe number. She ensured her class that they would receive plants and fish when the levels were suitable. About the second week in she added a plant into the aquatic chamber which really helped with the dissolved oxygen levels. Once suitable (about the third week) the fish were added and one can see from the table that the tested fields remained fairly constant. 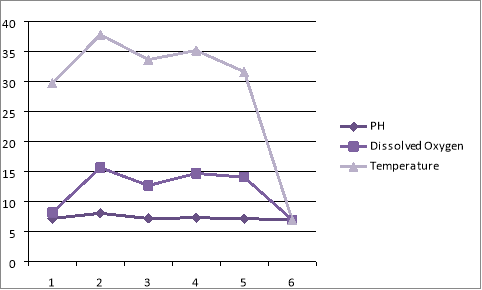 The table below shows the observations of the aquatic, decomposition, and terrestrial chambers over time. When the eco-column was first assembled, the water was not in very good condition. It reeked of sewage, was yellow and from the chart above the dissolved oxygen levels were as low as they could be. Not only was the aquatic chamber bad, but the decomposition and terrestrial habitats smelled fowl, were full of mold, and life did not survive. From the chart one can easily see that over time the conditions greatly improved and by the end was an ecosystem sustainable for life. By October 22nd the eco-column had greatly improved. There were signs of growth, clear water and the mold was nearly gone. By the last day of the experiment there was no smell, no algae and no signs of mold. From observations and data it is clear that the presence of plants and animals helped to improve water and soil quality. They helped to minimize bacteria and fungus while improving the state of the air and oxygen levels.

The sunlight brings in warmth , energy, and oxygen. While the animals ( fish and insects) breathe in oxygen CO2 is produced. The CO2 is then taken in by the plants and oxygen is released. The cycle then repeats.

The fish niche is to clean up the algae present in the aquatic habitat. While the aquatic plants niche is to take in the CO2 produced from the fish and produce oxygen in order to keep the fish alive and dissolved oxygen levels high.

Our eco-column started out lifeless. The water was dark, the smell was unbearable, the chemical levels were high, and the dissolved oxygen levels were low. Over time the water began to clear, the smell went away the chemicals leveled out and the dissolved oxygen levels rose. The presence of plants cleared up the water and made it livable. After the first plant other plants were able to grow and the ecosystem was able to support life (fish).

After the first week my groups eco-column became stable, the levels remained constant from that point forward, ours was also capable of sustaining life. However, everyone’s eco-columns weren’t as stable. Several groups struggled with clearing up their water and raising their dissolved oxygen levels. Because of this they were unable to have fish. One groups water turned black due to a fungus and eutrophication occurred.

My group’s pH, dissolved oxygen, and temperature all follow the same pattern. They started out very low, rose quickly, dropped, and then leveled back out.

Many of our terrestrial insects died so this could have possibly affected the levels, as well as lack of sunlight.

Since we worked at lab stations other groups were always around. I observed that most people had similar results to us. Good temperatures, steady levels of pH and dissolved oxygen with rather clear water. Some groups however were not similar. Some had bad levels, could never get oxygen levels to healthy state and had vast amounts of mold and algae. Some eco-columns were lifeless because insects and plants were unable to survive.

The only error my group could find in the lab was the soil test. We could never get enough soil to do the test, so our data is very scarce and not one week could we actually complete the task. The only time we had enough soil was the last time and the results did not seem to be very accurate. I believe something could be done to improve the soil test and raise the accuracy.

Before this experiment I was clueless on the various water and soil test; as well as how to conduct them. I now feel confident that I could complete each test on my own and I am aware of the temperature, pH level, and dissolved oxygen number needed to sustain life. This experiment was very helpful in demonstrating how an ecosystem works and how everything needs and plays off one another. The eco-column gave us the opportunity to experience biogeochemical and life cycles. We learned what is necessary to sustain life and I feel as if that was the most important thing learned from the eco-column experiment.