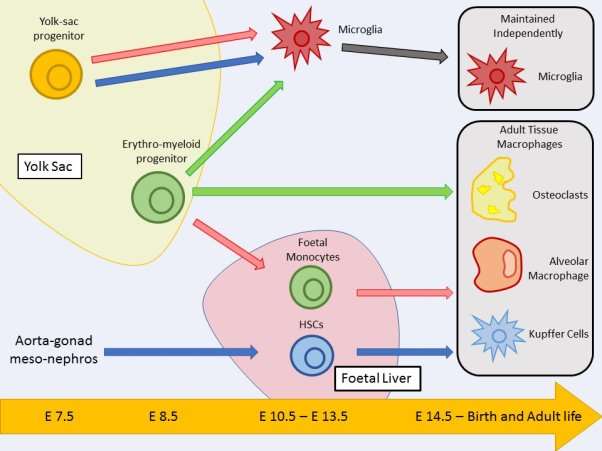 Figure Legend: This figure highlights possible tissue macrophage origins and their development pathways. The essay discusses contradicting findings in the literature, involving three different publications; Sheng et al, 2015 (blue pathway), Hoeffel et al, 2015 (red pathway) and Perdiguero et al, 2015 (green pathway) which are shown in the figure. Cell positions relate to the time point they are established during embryonic development. Positions of yolk sac and foetal liver are also related to the times they are developed.

In the late 19th century Ilya Metchnikoff discovered macrophages (Tauber, 2003) and since then our understanding of the immune system and its complexity has progressed to a stage where the macrophage is no longer as simple as was originally depicted by Metchnikoff. Although much more is known about tissue specific macrophages and their functions, the origins of these macrophages are less well understood including how their origins relate to the functions they have within specific tissues. This essay aims to address the current ideas about the origins of tissue macrophages and whether these origins influence the subsequent functions of macrophages.

Tissue macrophage have a huge degree of heterogeneity which reflects upon the specialization of their functions in different tissues and locations (Gordon and Taylor, 2005). Macrophage heterogeneity is required to ensure the tissue macrophage has the most effective phenotype to tackle its specific microenvironment, this is particularly important in the gut. Tissue macrophages in the gut isolated from the lamina propria have a unique phenotype characterised by high phagocytic and bactericidal activity but very poor production of pro-inflammatory cytokines which makes them perfectly suited to their microenvironment (Gordon and Taylor, 2005). There are many specialised tissue macrophages that have very distinct functions including; osteoclasts in the bone which breakdown bone deposits for bone remodelling, alveolar macrophages (dust cells) in the lung that break down foreign material and pathogens, and microglia in the brain which play a role in neuronal development homeostasis and the recovery from pathology (Boyce et al, 2008; Rubins, 2003; Prinz et al, 2014). The theory that tissue macrophage populations are replenished from circulating monocytes in the blood is somewhat true but the most diverse tissue macrophages such as microglia, alveolar macrophages and osteoclasts are replenished through self-renewal and proliferation (Yona and Jung, 2009). There is a substantial number of studies discussing whether macrophages originating from monocytes in the blood can differentiate into resident tissue macrophages. In most cases the monocyte subset that the macrophage originated from determines its ability to differentiate into a specialized resident tissue macrophage, this is particularly true in the lung as studies have shown only Ly6Clo, not Ly6Chi, monocytes have the ability to differentiate into enchymal lung macrophages (Landsman et al, 2007). In regards to the more complex and specialised alveolar macrophages in the lung, studies have shown that these macrophages require a parenchymal lung macrophage intermediate (Landsman and Jung, 2007). Circulating monocytes in the blood were long believed to be the origin of specialised tissue macrophages but recent evidence has shown that this is incorrect and proven that many of these tissue macrophage populations are developed long before birth (Epelman et al, 2014).

Macrophages are first observed during embryonic day 6.5 and are produced in the yolk sac during what is termed as primitive haematopoiesis (Epelman et al, 2014). During this early stage in development macrophages are the only immune cell produced due to restricted progenitors in the yolk sac. During embryonic days 8.5 – 10.5 hematopoietic stem cells (HSCs) emerge from the aorta-gonad meso-nephros (AGM) and give rise to all immune lineages (Epelman et al, 2014). At embryonic day 10.5 HSCs migrate from the AGM to the foetal liver, the foetal liver then becomes the major hematopoietic organ until birth. Only after birth do bone marrow HSCs become the primary progenitors and produce all immune lineages (Orkin and Zon, 2008). Microglia are the only tissue macrophages that are established in the yolk sac and are self-maintained through-out adulthood, all the other tissue macrophages are established from embryonic day 14.5 to birth and either self-maintained by proliferation or replenished by HSCs in the bone marrow (Ginhoux et al, 2010; Sheng et al, 2015). The arrival of fat-mapping techniques have enabled researchers to precisely track embryonic macrophage populations into adulthood, giving an insight into the relationship between resident tissue macrophages and circulating blood monocytes (Epelman et al, 2014). As previously discussed, microglia are the only tissue macrophage originating from the yolk sac and arise before embryonic day 8 (Ginhoux et al 2010). Fate mapping analysis was used to determine that the origin of microglia was the primitive myeloid precursors in the yolk sac and also proved that microglia are self-maintained independently of any circulating blood monocytes (Ginhoux et al, 2010). There is also evidence that Langerhans cells originate from the yolk sac but only partially (Sheng et al, 2015). The fate mapping study by Sheng proved that microglia and Langerhans cells were the only tissue macrophages that originate from yolk sac precursors and that most adult tissue macrophages originate from a second wave of haematopoiesis driven by HSCs. (Sheng et al, 2015). The number recent of publications concerning tissue macrophage origins is staggering and is most likely attributed to the arrival of fate mapping techniques. With the large surge of new studies regarding tissue macrophage origins it is important that a clear understanding is generated but this is not always possible with such a complicated subject.

Determining the origins of tissue macrophages may be valuable for furthering our knowledge and understanding of their development but do their origins have any influence in determining their function? As well as ontogeny, diversity in the functions of tissue macrophages can also be attributed to the local signals received by the macrophages. These local changes can drive the expression of unique transcription factors which in turn lead to different functions (Lavin et al, 2015). There is a lot of evidence to suggest that the tissue macrophages microenvironment can alter its function, the plasticity of tissue macrophages allows them to adjust their functions to inflammatory events (Lavin et al, 2015). Using ionizing radiation most embryonic-derived tissue macrophages can be eliminated, they can then be replaced with donor-derived bone marrow progenitors to determine if the wild type state of the tissue can be restored. Using this technique, studies have proven that bone marrow progenitors can completely restore the enhancer profile and transcriptional programme of the embryonic-derived tissue macrophages that were eliminated (Lavin et al, 2015). A very recent study has shown that yolk sac macrophages, foetal liver monocytes and adult bone marrow monocytes can all successfully differentiate into alveolar macrophages in the lung after the removal of the native alveolar macrophages using ionizing radiation (van de Laar et al, 2016). The study also showed that other already developed tissue macrophages, liver, peritoneal and colon macrophages cannot successfully differentiate into alveolar macrophages in the lung. This finding suggests that the plasticity of the mononuclear phagocyte system is at its largest during the precursor stage and after differentiation to tissue-resident macrophages no further phenotypic changes of macrophage types can take place (van de Laar, 2016). Perhaps the most interesting finding from this study is that the alveolar macrophages differentiated from yolk sac macrophages, foetal liver monocytes and bone marrow monocytes were still able to self-maintain and prevent alveolar proteinosis (van de Laar, 2016). Similar results have also been observed with Kupffer cells. Kupffer cells were eliminated from the liver using diphtheria toxin-mediated depletion allowing its niche to become vacant. Observations showed that circulating monocytes can engraft the liver and adopt the transcriptional profile of the eliminated Kupffer cells and also become long-living self-renewing cells like their eliminated counterparts (Scott et al, 2015). These new findings question whether the origin of tissue macrophages is truly important to their function as the progenitors and monocytes tested have all been able to restore the tissues lost macrophages successfully without any loss of function.