Nutrition Comparison of Genders and Ages

The teenage male needs an estimated average requirement of 2755 calories a day. Males require the most dietary energy during this age, due to the body needs of more energy and nutrients, because during teenage years the human body has a rapid growth and development rate. Teenager’s diet in general needs to be rich of carbohydrate, Minerals (calcium, iron …) and proteins which needed for muscle development, bones and growth. Also needs vitamins which are chemical compounds that are required for normal growth and metabolism. He also needs extra calories because he is an athlete. Thus his body needs more sugar to burn during exercise, potassium rich food (mixed berries)because of the excess sweating, more protein which improves athletic performance, carbohydrates and fat.

The 30 year female needs 1940 calories and an extra 200 because she is pregnant. Her diet need to consist of high iron rich food like: meat, pulses, dried fruit and nuts, also food rich of vitamin C if she is a vegetarian to help absorb more iron to avoid been anemic. Consume food high in vitamins, folic acid for baby brain development. More Carbohydrate for energy needed, as she the life support for her baby. example of high carbohydrate rich food are pasta, potatoes ,cereals, rice and couscous. Proteins and calcium rich food for example: canned fish with bones, broccoli and dairy product, thus needed for baby development and her general health.

Age is a factor that affect the estimated average requirement (EAR).therefore The elderly male does not need as much calories as the teenage athlete . He only needs around 2100 calories; however his body requires proteins to strengthen his immune system by making antibodies and heamoglobin, and increases his strength in general. Examples of high proteins rich food are: meat, seafood and eggs. He needs calcium because the bone density shrinks with age, and Carbohydrate needed for energy as it serve as the main energy source for the human body.

Atherosclerosis is a risk factor for number of conditions called cardiovascular disease (CVD) because it involves blood flow.

In human body the arteries become narrow as the body age, leading to atherosclerosis. However life style plays big role in speeding the process, for example smoking and consuming alcohol. One of the major risk factors is obesity due to poor diet that is high in fat content, cholesterol and consuming food over the estimated average requirement for the person. Also high blood presser and diabetes, which also caused by obesity. (2)

Rickets was very common in the past, but with medical progress and information it nearly disappeared. The diet plays a big factor in developing this condition, thus the lack of vitamin D and calcium is the most common cause. Therefore this deficiency causes rickets in children and osteomalacia in adults. Vitamin D is produced by the skin when it’s exposed to sun light, also found in fortified cereal and small number of food i.e. eggs. Calcium is found in dairy product such as cheese, and in green vegetables. This condition is common in children with darker skin because they need more sunlight in order to make enough vitamin D. (3)

a) In order for the human body to be able to absorb nutrient it needed from the food to the bloodstream, the food has to be digested properly. So absorption and assimilation can happen only if food is turned into small molecules. For example when we eat a piece of bread, it start to break by been chewed in the mouth. This mechanism serve two purposes: 1 it become small to swallow.2saves body energy. Then the enzyme in the saliva breaks the carbohydrate into sugar which the body uses for energy. 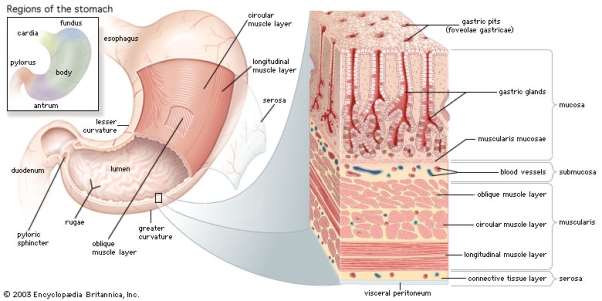 The stomach is muscular bag, where gastric stage of digestion start. The food enters the stomach via the cardiac sphincter, the latter stops the contents of the stomach from splashing up into the oesophagus. The pyloric sphincter keeps food inside the stomach by contracting and controls the amount of food that passes into the small intestine. The stomach has three layers of muscle that contract in order to digest the food mechanically, which aid in breaking the food into chyme, mixing it with gastric juices and moving it around and through the stomach. The longitudinal muscles contraction causes the stomach to shorten and widen, the circular muscles that run around the stomach causes it to lengthens and become narrow, while the diagonal muscle cause it to twist. This muscular contraction called peristalsis. The geometry of the lumen increases the churning action in the stomach, and the rugae lining flatten to create more space for food and become folds when empty.so this movements and changes to the stomach wall, combined with chemical reaction (mucosal glands secretion of gastric juice), breaks food molecules in the stomach. 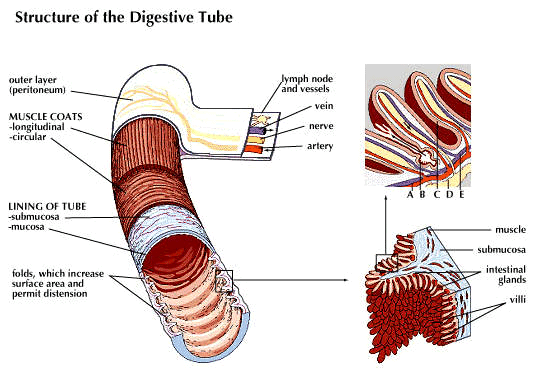 The small intestine is longer than the colon, but smaller in diameter (hence the name).When the chyme leaves the stomach it deposed in the first part of the intestine called the Duodenum. A canal is linked to this part from the pancreas and gall bladder. It’s through here that the pancreatic juice is secreted into the small intestine. The muscle coats: longitudinal and circular, contract and relax to aid the food to squeeze along the digestive tract. This is called Peristalsis. Most of nutrient the body needs is absorbed in the small intestine through its lining, which is covered by tiny microvilli, the latter gives the lining a large surface area for absorption. 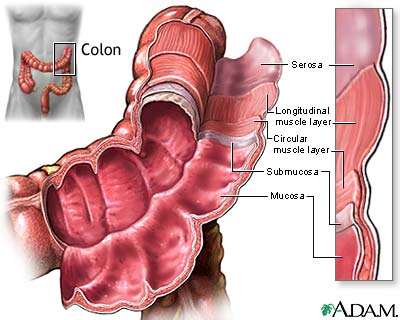 The large intestine (colon) is the last stop for food in the digestive system. Its longitudinal and circular muscles aid the movement of food in the colon. The latter is divided into four sections: the ascending colon, the transverse colon, the descending colon and the sigmoid colon. The colon is made up of the mocosa layer, which is lined with goblet cells that secrete mucous, the latter aids the food passage through the colon. The mucosa layer is in top of the submucosa layer, which is a connective tissue. The walls of the colon unlike the small intestine it has no villi, as not much absorption happen her.