Multiple sclerosis and Autism spectrum disorder are two neurophysiological diseases that are found to develop in the genetically susceptible population. The exact causes of these diseases and the exact interplay between the genetic factors and environmental factors in the development of the disease are serving to be a billion dollar question.

VISUAL IMPAIRMENT: As the disease attacks the optic nerves, visual problems arise in the patients. The inflammation of the optic nerves lead to severe pain behind the eyes. Double vision is a really common symptom in MS patients. In certain patients, even vision loss is reported.

BLADDER AND BOWEL PROBLEMS: 50% of the patients have constipation which sometimes lead to faecal impaction. Bladder problems arise which makes the patient to urinate more frequently.

The progression of disease, just like the symptoms, vary from one individual to another. There are five types of progression seen in MS patients.

The researchers have identified certain genes and environmental factors which most likely cause and progress the disease. One striking observation is that genetic linkage studies have shown the variation in the genes associated with the Major Histocompatibility complex (MHC) promotes the risk for developing MS in individuals.4 The group of genes called the human leukocyte antigen (HLA) genes encodes for Major histocompatibility complex (MHC) in our body.5 The HLA genes are present in the short arm of chromosome no 6. The MHC consists of two classes. The genes HLA-A, HLA-B and HLA-C form the MHC class I. The genes HLA-DP, HLA-DQ and HLA-DR make up the MHC class II. The MHC proteins bind to the T-cells to recognize antigens.6So, the MHC basically helps the immune system to differentiate between self and non-self cells (a property called as MHC restriction).6 It has been identified that the HLA-DRB1 mutant alleles and HLA-A alleles increases the risk of developing the disease.7,8 Though these are the most commonly reported variant gene present in MS, variants in genes present in the HLA system such as HLA-DR15, HLA- DQ6,etc have been linked to the disease as well.7 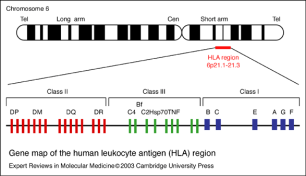 Also, variants in IL7R have been linked to MS. Presence of C risk allele of the IL7R gene decreases the expression of IL7R.9 IL7 signalling pathway is essential for the T cell differentiation of CD4-CD8- thymocytes.10It also plays a major role in maintaining the T-cell homeostasis. Variant of the IL7R results in the decrease in the expression of IL7R which affects the interlukin pathway, thereby disrupting the T cell development and T cell homeostasis.10

But with the help of genome wide association studies (GWAS), a set of 12 susceptible genes which promotes the risk for developing MS have been identified recently.11,12,13 Although the effect of variations in these genes are not as profound as the variations in the HLA gene system.11

The neuron/nerve cells comprises of a cell body and an extension from the cell body called axon. The axons play a central role in carrying the message from one neuron to another. The axons in the body usually have a coating rich in lipids, called the myelin. Myelin insulates the axon and protects it (just like an insulating coating over an electrical wire).14This helps in the efficient nerve transmission. Myelin present in the central nervous system are produced by a special set of cells called the oligodendrocytes.15

It is believe that in MS patients, a wayward immune system is unable to differentiate between the self and non-self cells and cause an inflammatory response, most likely because of the variations present in the HLA gene system and IL7. This triggers the T-cells to attack and destroy the myelin sheath of the axon or the oligodendrocytes (cells that produce the myelin sheath), keeping the nerve fibres unprotected and uninsulated. This is called as demyelination.14This consequently causes destruction to the nerve fibre (as the protective sheath is degenerated). This produces many scar tissues or lesions (hence the name multiple sclerosis) along the nerve cells, thereby limiting or blocking the transmission of impulses through the nerve cells. Consequently, the brain cannot communicate properly with the other parts of the CNS and eventually causes the various symptoms that are seen in the MS patients. In a nut shell, the disease is believed to be caused by the interplay between inflammation and neurodegeneration.1 After the episode of attack, the inflammation reaction may get halted and the neurons that are not demyelinated resume their normal function and even some recovery is possible (as seen in the relapsing-remitting type of progression). It has also been shown that the demyelinated axons tend to produce more sodium channels and this helps in the remission.16 So, sodium channels are rightfully targeted for the MS therapy now.17 Also, even though the oligodendrocytes are not present around to remylinate immediately, myelin does grow back, but it may take a real long time.15 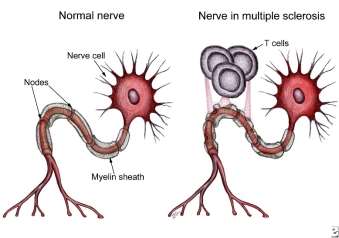 Symptoms include impairment of social relationships, lack of communication and lack of imagination skills and signs of repetitive behaviour. Symptoms vary from one individual to another significantly. 18Asperger’s syndrome patients did not have significant cognitive impairment/delays like autism patients. PDD-NOS is considered as the milder form of autistic behaviour and usually show symptoms in one area, for instance, just lack of social communication.19 The progression of the disease is also different in different patients. Symptoms in childhood may include constant crying, sleeping problems, absence of speech, repetitive movements like handshake or clapping, lack of eye contact, etc. Symptoms in the adolescence and adulthood may be mood imbalance, presence of disability becomes more obvious and prominent, increased anxiety levels, epilepsy and seizures in rare cases.19

ADS is more of a syndrome than a disease, caused by a variety of genetic and environmental factors.19 Whole genome screens, next generation sequencing (NGS) and cytogenetic studies have been carried out to figure out the genes involved in the cause of the syndrome.20 ADS is a really complex neurological condition which is linked to about 100 genes as of now. 21The genes generally fall into:

Mutation of genes that are involved in the synaptic functions are commonly observed in ASD. A few important genes are discussed below:

The genes involved in the production of Neurexin and neuregulin are commonly found mutated genes in ASD. Neurexin and Neuregulin act as neuronal cell surface receptors and organize the interaction between the pre-synaptic and post-synaptic neurons. Neurexin interacts with CASK in the pre-synaptic neuron. Neuroligin interact with PSD95 in the post- synaptic neuron. The two proteins interacts with intracellular factors as well as scaffolding protein, forming a trans-synaptic interaction necessary for a synapsis to exist. Mutations in the genes encoding for these proteins have been reported in ASD patients. Also, the targeted knock out of these genes in the mouse model have caused deregulation of synaptic function. Mutation of neurexin in mice have shown to disrupt the voltage-gated calcium channel, thereby hindering pre-synaptic release of vesicles. Mutations in neuroligin in ASD patients reduced the expression of neroligin, thereby causing less interaction with neurexin thereby causing synaptic transmission defects.22

Also, mutations in cadherin9, cadherin10 and cadherin15 are observed in ADS patients. Mutations in these genes destabilize the pre-synaptic and post-synaptic interactions, thereby inhibiting synapsis, leading to autistic symptoms.22

CNTNAP2 is a member of the neurexin family that encodes for a neuronal membrane protein that helps in the trans-synaptic interaction. Mutations in this gene have been reported in autistic patients.20

Methyl –cytosine binding protein (MECP2), a transcriptional regulator, is mutated in Rett syndrome. The gene is present in the X chromosome. This mutation occurs exclusively in females as the mutation of this gene in males is lethal. Mutation of this gene results in leads to reduced release of vesicles in inhibitory synapsis and affecting the excitation to inhibition ration. 23Another rare mutation in the form of the transcriptional regulator, ARX, is seen in autistic patients.23 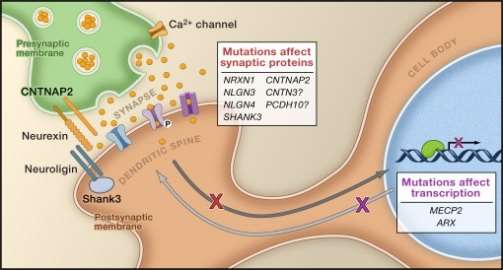 Role of demyelination in the disease:

Mutations in HLA region (like MS) and increased level of IL12 are reported in autism.24 This causes the T cells to attack the myelin sheath. The damage of myelin sheath ergo nerve cells (mechanism explained above) have been a factor of brain damage in autistic individuals. Neuropathological findings suggest a role for demyelination in the damage of amygdala, hippocampus and cerebellum of autistic patients.24

Along with the genetic factors, the environmental factors also seem to play a role in the development and progression of these two diseases. Lack of Vitamin D supposedly plays a role in increasing the risk of developing MS.2 Mercury vaccines have been suspected to increase the risk of developing ASD.25 Mercury vaccine results in the deficiency of zinc and that in turn impacts the level of vitamin B12.25 Vitamin B12 in turn is essential for myelin sheath formation.25

In sum, these two neurological diseases are really complex and not yet fully understood yet. Tonnes of research are being performed in order to understand the cause and the exact interplay of genetic factors in the development of disease. Fully understanding the diseases would also provide better ways to treat individuals affected by these devastating complex neurological diseases.