MRI for Diagnosis of Mycetoma or Madura Foot

“Dot in Circle” sign — a unique attribute of mycetoma foot on MRI: a report of two cases

Aggarwal A, Gupta M, Patel B N, Patel S B

Mycetoma or Madura Foot is a chronic localized granulomatous disease characterized by exuberant granulomatous tissue formation involving the subcutaneous plane. It is most common in tropical countries. Diagnosis has been traditionally done by microbiological culture and histopathological tissue diagnosis but these are often difficult to obtain and frequently inconclusive. MRI has recently emerged as a promising technique for early and prompt diagnosis of Mycetoma with the description of a highly specific sign called as “Dot in Circle” sign. We hereby present 2 cases showing this characteristic “Dot in circle” sign on MRI and thereby establishing the diagnosis of Madura Foot.

A 52-year-old male farmer by occupation presented with a painless swelling involving the left foot, which had been operated on elsewhere two times. Previous reports of surgery were not available. Examination revealed a non tender, large swelling involving whole of the left foot and the ankle joint. It was associated with numerous chronic discharging sinuses. (Fig 1) General examination was unremarkable and the soft tissue was normal. Rotuine blood and biochemical investigations were also unremarkable. Plain radiograph revealed a soft tissue mass in the left foot with advanced bony destruction mainly involving the tarsal, metatarsals and phalanges without any calcification. MRI scan was performed to evaluate the disease further. MRI showed a soft tissue mass lesion, diffuse hyperintensity involving subcutaneous tissue, muscles, and intermuscular fascial planes. There were also multiple focal fluid collections seen in the fascial plane with ulceration of overlying skin. The mass demonstrated characteristically conglomerate areas of multiple, inconspicuous, small 3–4 mm oval to round hyperintense lesions, which were separated by a low-signal-intensity rim in the subcutaneous plane of the dorsum of the foot. The centre of few of these lesions showed a small hypointense focus, resulting in the dot-in-circle sign (Figs. 2, 3). The underlying bones showed cortical erosions mainly involving the tarsal, metatarsals and phalanges. On the basis of the above clinical and radiological findings, a diagnosis of mycetoma foot was put forward. A biopsy was performed to confirm the diagnosis which revealed granulomatous inflammation and presence of eumycetoma (Fig. 4).

A 37 year old male, complained of mass in the left foot for the past 2 years. Examination revealed multiple numerous discharging sinuses with skin ulcerations. The discharging sinuses did not contain any grains which is usually pathognomonic of Madura mycosis. Plain frontal radiograph of the left foot shows soft tissue mass with severe destruction of the bone along with a palisade type of periosteal reaction mainly involving the tarsals and metatarsals (Figs. 5). The patient underwent MRI for evaluation and extent of the disease. Similarly, the lesion showed marked inflammatory changes in the left foot with cortical erosion, with micro-abscesses formation. The characteristic dot in circle sign (Figs. 6) was described and diagnosis of mycetoma foot was made. The patient underwent an excision biopsy. Histopathology showed eumycetoma. 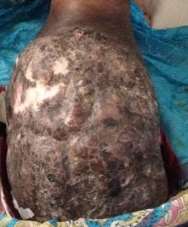 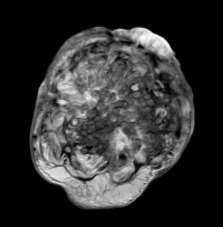 lesions which were small and round in shape and separated by tissue of low signal intensity are noted. Some of these lesions (arrows) show a central small focus of hypointensity, resulting in the characteristic dot-in-circle sign. 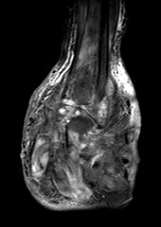 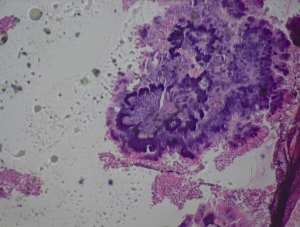 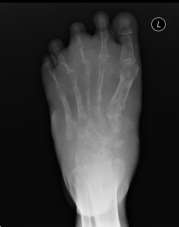 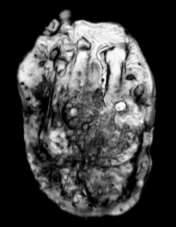 Madurai Mycosis is a chronic granulomatous disease caused by 2 group of organisms, the Eumyces which are also called as true fungi or eumycetoma, and the Actinomyces, which are the filamentous form also called as Actinomycetales or actinomycetoma. The disease was first described in the Madurai district in the state of Tamil Nadu, hence the eponym Madura foot. The infective organisms are normal inhabitants of the soil and cause infection by direct implantation into the skin, most commonly the foot in individuals walking bare foot. Patients classically present with multiple subcutaneous nodules which are characteristically painless. These may give rise to fistulae formation, often associated with a purulent discharge. The disease progresses slowly and over long term leads to abscess formation, sinus tracts, osteomyelitis, and fistula formation ultimately resulting in severe deformity and disability if treatment is not provided [4] .

Histologically the disease is characterized by formation of so called ‘‘grains’’, which are found embedded in the abscesses. These grains are nothing but aggregates of the organism and are surrounded by extensive granulation tissue. Initially there is soft tissue swelling with induration which later progresses to form multiple discharging sinus with or without bone involvement. [5]

Radiological investigations play a significant role in arriving at the diagnosis swiftly especially since tissue cultures are seldom diagnostic. Radiographs may be normal early in the disease process but later show varying degree of soft tissue swelling with destruction of the bone in form of sclerosis, cavity formation and classical palisade type of periosteal reaction. This is followed by expansion of the bone with scalloping of the cortex or osteoporosis. This condition mimics bacterial osteomyelitis but in mycetoma the bones are usually detsroyed from the outside, giving rise to characteristic “Moth eaten appearance”. [2]

The “Dot in circle” sign has emerged has a highly specific sign for the diagnosis of this condition and is based on the understanding of the pathogenesis of the disease process. It reflects the unique

pathological feature of mycetoma and consists of multiple small round hyperintense lesions of size measuring around 3-5 mm surrounded by a hypointense rim. The small hyperintense lesions represent the granulation tissue and the surrounding hypointense rim represents the intervening stroma having fibrous septations. The low-signal intensity dot in the centre is due to the presence of fungal grains which causes a susceptibility effect on MRI. This is a unique appearance and is easily recognisable in mycetoma. [1] This sign was proposed by Sarris et al. in 2003 on T2-weighted, STIR, and T1-weighted fat-saturated gadolinium enhanced images.

We conclude by saying that mycetoma is a severe debilitating disease with high morbidity. Until now the diagnosis of the disease was limited to clinical picture supplemented by biopsy and microbiological culture which were difficult to obtain and proved to be inconclusive in many cases. MRI has emerged as an excellent investigation in mycetoma and helps to arrive at the diagnosis much earlier in the course of disease thereby further helping in reducing the morbidity and rate of complications. Awareness of this characteristic sign is important in view of the scarcity of reports that describe it in the literature and with increasing use of MRI in the evaluation of soft tissue tumours. [3]