Quantification of macro and micro nutrients from earthworm (Eudrilus eugeniae) was aimed and successfully elucidated in the present study. Macro minerals like calcium, magnesium, phosphorous, potassium, nitrogen and sodium and micro or trace elements like iron, selenium, zinc, copper, sulphur, Nickel, Chromium and molybdenum was assayed using colorimeter, Micro-Kjeldahl method, flame photometer, EDTA Titrimetric method and specifically atomic absorption spectrophotometer (AAS). From the study, it is evident that the earthworm powder of E. eugeniae is a rich source of macrominerals (Calcium and Magnesium) and trace elements (Iron and selenium) together with notable quantities of other important elements, indicating that this earthworm contain potentially useful quantities of many nutrients that are critical to the health of the humans and animals who consume them.

Metals are nutrients in soil are absorbed by plants, transferred to animals and men by food chains, and finally return to the soil. Earthworms are found virtually worldwide and live in almost any type of soil that contains the right amounts of moisture and organic particles and of various sizes and colors [1]. It has dense nutritional content because of their soil based origin [2]. The earthworm is a widely used Chinese herbal medicine [3]. Although Wallace [4;5] reported more than 100 years ago the inclusion of earthworms in diets of Amerindian tribal) populations little is known about the nutritive value of those edible invertebrates [6]. Extracting medicinal compounds from the earthworm has traditionally been practiced by indigenous people throughout the world, more particularly in Asia [7]. Previous earthworm studies have shown its antimicrobial [3] hepatoprotective [4], anticancer [8] and scar wound healing characteristics [9]. The anti-inflammatory activity together with antioxidant properties seems to be due to the high polyphenolic content in earthworm tissue [10]. Moreover, crude earthworm extract has a thrombolytic effect that could significantly promote blood circulation to remove stasis [11].

Minerals are the nutrients that exist in the body, and are as essential as our need for oxygen to sustain life. Minerals are also found in organic and inorganic combinations in food. It plays a vital role for all mental and physical processes including for total well being. They are most important factors in maintaining all physiological processes, are constituents of the teeth, bones, tissues, blood, muscle, and nerve cells [12]. Therefore, since the drive of animal farmers worldwide is to source for cheaper means of nutritive dietary supplement which may replace fishmeal wholly or partly in animal diet and also supply micro and macro-nutrients [13]. Considering the above facts the present study was aimed to quantify macro and micro or trace mineral profile of earthworm species Eudrilus eugeniae.

The earthworms were washed with running tap water to remove any dirt from body surface. The earthworms were kept in 0.5% NaCl at room temperature for 1-2h with few changes of solution until their digestive systems were clean. Cleaned earthworms are taken and dried at 65-800C in forced draught, stainless-steel lined ovens. Ground the samples completely to a particle size of less than 1mm, and mixed thoroughly before a sub sample of suitable size is stored for analysis. Store the samples in a clearly labelled, airtight, glass or polycarbonate containers to prevent samples from contamination. Storage at room temperature is sufficient, but long term storage of reference material requires freezing. Re-dry the samples at 650C for 12 hours prior to weighing for heavy metal analysis.

Weigh 0.5 – 1 g sample accurately into acid washed 250 ml digest tubes. Add 6 – 10 ml concentrated HNO3, swirl to mix sample and acid. Place tubes onto a Tecator 40 system, or similar set at 1000C for 2 hours. Reduce the total volume to 1 ml. The sample solution becomes thick slurry. Remove samples from digestion block; allow cooling and diluting to 10 or 20 ml with deionized water. Allow samples to settle (minimum 2 hours, preferably overnight), and filter through Whatman No. 40 filter paper or centrifuge at 6000 rpm for 15 minutes. Run at least two digest blanks with samples. The schematic representation of analytical procedure of minerals is given in figure1. 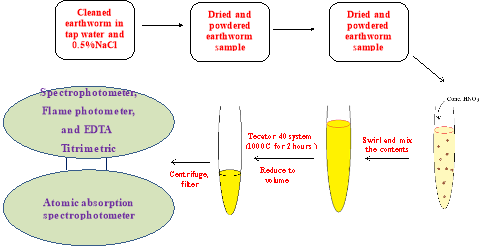 The selected earthworm species, E. eugeniae was successfully converted into powdered and subjected to mineral analysis in that six macro minerals namely calcium, magnesium, nitrogen, phosphorus, potassium, and sodium and eight trace elements like iron selenium, zinc, copper, sulphur, nickel, chromium and molybdenum was noticed and are depicted in table 1 and 2.

The higher content of calcium in E. eugenia suggests that this species of earthworm probably has a higher capacity of storage of calcium in its tissues as suggested by the presence of calcium gland in it [17]. The earthworms also contain nutritionally significant amounts of calcium, which would be important for pregnant or lactating women, young children at risk of calcium-deficiency rickets and postmenopausal women in whom there might be concern about osteoporosis and fractures [6].

Earthworms require these minerals for their day to day physiological activities. It may be because they have to burrow or swallow their way through hard packed soil. For in order to perform these various physiological bioactivities, the earthworm must maintain a constant firing (electrical potential) of the nerve and muscle cells and needed for this is the higher calcium and magnesium concentration. Calcium and magnesium have been shown to be involved in regulating nervous excitability and muscular contraction i.e. maintaining the electrical potential in nerve and muscle cells [18].

Nitrogen occurs in all organisms, primarily in amino acids (and thus proteins) and also in the nucleic acids (DNA and RNA). The human body contains about 3% by weight of nitrogen, the fourth most abundant element in the body after oxygen, carbon, and hydrogen [19]. Phosphorous works with calcium to develop and maintain strong bones, teeth and enhances use of other nutrients. It plays a key role in cell membrane integrity, intercellular communication and for proper energy processing in the body. Potassium is important in DNA and protein synthesis, Apart from this potassium is important in cell volume regulation [20]. Sodium in EWP of E. eugeniae was found to be 0.19 ppm. Sodium is the major cation of the extracellular fluid which in conjunction with potassium forms the Na+-K+ pump which effectively maintains Na+ as an impairment extracellular solute [21].

Paloetti et al. [6] reported that all of the earthworm (kuru and motto) preparations were excellent sources of iron, having iron contents that ranged from 1050 µg-1 in kuru’s meat to 2990 µg-1 in motto’s meat. They compared the iron contents of these two earthworm preparations with those of some other meats. This means that, assuming good bioavailability of the iron in the earthworms, they could be a useful food source to mitigate the risk of iron-deficiency anaemia. Selenium is essential component of teeth, key antioxidant enzyme and necessary for normal growth and development. It has a function in detoxification of heavy metals such as mercury and plays an important role in the production of antibodies by the immune system.

Zinc is an important antioxidant, which records 0.5% in the present study. It plays an essential part of more than 200 enzymes involved in digestion, metabolism, immune response and wound healing. Copper is an essential element for the formation of normal red blood cell and connective tissue formation. It acts as a catalyst to store and release iron to help form haemoglobin and also contributes to central nervous system function. Sulfur is involved in the formation of structural protein, including muscles and hair. It also severs critical role in liver detoxification. Its important function is to act as an antioxidant nutrient and oxygen handling role in growth. Nickel is found in all animal tissues and the highest concentration was noticed in nucleic acids, particularly RNA, and is involved in protein structure or function. It may activate certain enzymes related to the breakdown or utilization of glucose [22]. Chromium helps in glucose metabolism and aids to regulate blood sugar by potentiating insulin and serving as a component of glucose tolerance factor. Molybdenum contributes to normal growth and development. It is a key component in many enzyme systems involved in detoxification.

In conclusion, the minerals in earthworm powder obtained from E. eugenaie are capable of satisfying a significant fraction in daily requirements of minerals which plays a significant role in human nutrition without any adverse side effects.