Method for Measuring the Area of Radiometric Apertures

I propose and demonstrate a method for determining the area of radiometric apertures using the power ratio between Gaussian beams. The result relies on measuring the power of an optical beam of known radius with and without the radiometric aperture. The impact of the characterization of the laser beam and of the radiometric measurements on the area estimation is discussed and a 3-mm in-diameter sample is measured for validation. The contactless method is fast and simple and results in a relative uncertainty of 0.12%.

Calibration of the area of an aperture is necessary for radiometric and photometric measurements, including spectral irradiance [1- 4] and the realization of the SI unit candela [5-7]. The plethora of methods reported in literature can be assorted whether they are contact or contactless. Contact methods include probing the aperture border with an stylus, which position is mapped by an interferometric system [8].

Contactless methods are preferable as the possibility of damaging the sharp edge of the aperture during the measurement is avoided. A camera with an objective lens can be used for taking digital pictures of parts of the inner perimeter of the aperture, while an interferometric system is used for measuring the displacement of the images, allowing them to be further stithed together [9]. Another approach consists in raster scanning the aperture relative to a laser focused in a small spot in the aperture plane to determine the diameter at some radial angles [10].

Methods based on radiometric ratios have also been reported and depend on comparing measurements performed with a light overfilled aperture and a reference value. A spatially-uniform beam emerging from an integrating sphere can be used to compare the radiometric values obtained with the aperture under calibration and with the reference one [11]. Similarly a matrix of small-spot laser sources can be used [12, 13], with the reference provided by the known uniform irradiance distribution.

In this paper I propose a method for determining the area of a radiometric aperture using the ratio between Gaussian laser beams. The result is obtained from measurements of the optical power transmitted through the overfilled aperture compared to the total optical power without the aperture, with the beam radius at the aperture plane previously characterized. The technique is contactless and the measurement is relatively fast, providing an alternative way for measuring radiometric apertures.

The method proposed for determining the area of the aperture is based on measuring the radiometric ratio between the beam limited by the aperture and the full beam. Consider a Gaussian beam propagating along the zË† axis with an intensity distribution in the radial direction Ï on the transversal plane described as

Positioning the aperture in the plane orthogonal to the beam axis at Ï=0 reduces the measured optical power in eq. (3) to

The radius of the aperture is obtained by inverting eq. (6), resulting in

Equation (7) reveals the dependence of the aperture radius on the beam radius Ï‰ and radiometric ratio R measured at a given axial position. The sensitivity coefficients of the radius equation relative to those components are

The uncertainty of the measured area is composed [15] as

The area of the radiometric aperture is then trivially obtained from the circle formula, S = Ï€r2, with uncertainty given by uS = 2Ï€rur.

The first step of the method is the determination of the longitudinal profile of the Gaussian beam. This can be accomplished in practice by using the knife-edge scanning method [16] or using a spatially-resolving photodetector (for example, a CMOS or CCD camera). While the later can be troubling for beams wider than the sensitive area of the camera, the primer requires caution relative to radial asymmetries in the beam profile. The astigmatism of the beam must be verified by knife-edge scanning along orthogonal directions in the transversal plane and the mean radius is considered. The beam longitudinal profile reveals important information about the tolerance of the axial positioning of the aperture relative to the transversal plane where the beam is determined.

Next step consists on positioning the aperture in the beam path. Carefully placing the aperture front plane at the axial position where the beam has been characterized avoids the need for a correction on the beam radius value. The aperture under measurement must then be centralized relative to the beam axis. A recursive gradient search can be performed along the plane axes until convergence at the maximum optical power, where Ïâ†’ 0.

A laser diode with continuous-wave emission at 633 nm is collected with an objective lens into a meter-long single-mode optical fiber (Thorlabs SM600 [17]), which acts as a spatial filter by selecting the LP01 transversal mode. The beam is launched into free-space through the tip of an FC-PC connector and collimated using an 1″-large AR-coated plano-convex lens (L2) with a focal length of 38.2 mm, as illustrated in Fig. 1. A similar lens (L3) with 150-mm long focal length focuses the beam into the photo-detector.

The beam profile is determined using the knife-edge method. A pair of razor blades is scanned in the plane orthogonal to the optical beam in both xË† (horizontal) and yË† (vertical) directions, using a pair of linear actuators (Newport TRA25PPD and CMA25PP). The optical power is measured by an optical power meter with a diffuser probe (Thorlabs PM100). Data acquisition and transversal positioning of the knives and aperture are performed with a personal computer.

Flip mounts allow for selecting either the knives or the aperture, which are placed in the same xË† âˆ’ yË† translation stage. The translation stages, the lens L3 and the photo-detector are fixed into a platform and move together to the desired position in axial direction zË†. The aperture under characterization has nominal diameter of 3 mm and is built in anodized aluminium with sharp edges.

The offset distance between the planes of the knives and the aperture is set within 0.05 mm using a multi-probe optical reflectometer [18]. An automated routine is used to position the aperture in the transversal plane relative to the optical beam by scanning it along xË† and yË† directions until it is centralized.

The radiometric ratio is obtained by removing and reinserting the aperture using the flip mount while the power is measured using a silicon photodiode (Hamamatsu S1227-1010BQ) in photovoltaic mode. Calibrated trans-impedance amplifier (LabKinetics Vinculum) and digital voltmeter (Agilent 34401A) are used. Conditioning the signals for using a single range of these devices avoids linearity issues. The detector typical linearity is better than 10âˆ’5 [19]. 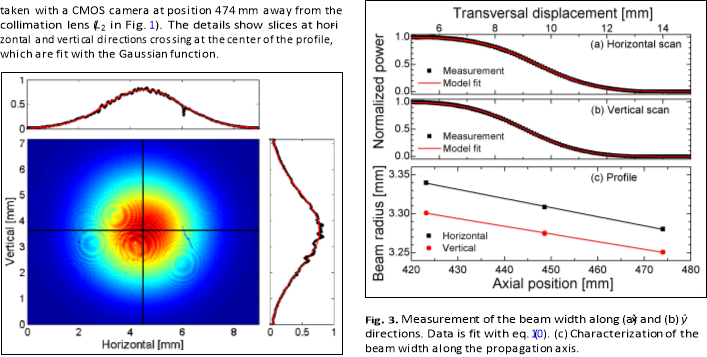 The longitudinal profile of the beam is evaluated by applying the knife-edge analysis at different axial positions. The optical power measured as a function of the knife position in xË† direction is modelled as the integral of the Gaussian intensity, resulting in the error function:

Equation (10) indicates that the measured power profile reveals the horizontal beam radius Ï‰x (z). The procedure performed along the yË† direction returns a similar result as a function of the vertical beam radius Ï‰y (z).

Figures 3a and 3b show the power measured with the knifeedge method along both xË† and yË† directions, respectively. A group of 10 scans, with 0.25-mm steps, is taken at a given axial position. Data is interpolated to steps of 0.1 mm using piecewise cubic Hermite interpolating polynomials [20]. Non-linear curve fit (Levemberg-Marquadt method) is globally applied to data with the beam radius parameter shared by all curves in the group. The beam radius values as a function of the axial distance to the collimating lens are shown in Fig. 3c.

Observe that the beam profile behaves linearly at the sampled axial positions. Fitting data with eq. (2) reveals the horizontal and vertical waists localized at about 3.3 m and 3.7 m, respectively. The slope of 10âˆ’4 indicates that a positioning error between the knives and the aperture of 0.05 mm has negligible impact on estimated radius.

The beam is slightly astigmatic (horizontal radius about 1% greater than the vertical one), so the average radius is computed from both horizontal and vertical radii as

The radiometric ratio is determined from five groups of measurement of the total beam power, alternated with four measurements of the power limited by the aperture. Interleaved measurements allows for data interpolation and avoids slow drift effects. Each measurement is composed by a group of 30 data points, corrected by the dark measurement. Three measurement were performed at each axial position. The calibration data of the trans-impedance amplifier and voltmeter are used for correction and considered in the uncertainty budget – see next section.

The average ratio of 0.3373 allows for performing both measurements (with and without the aperture) in the same scale of the amplifier and voltmeter. Keeping the measurement range of the equipment fixed avoids linearity issues, which must otherwise be corrected and could burden on the uncertainty budged.

The aperture radius is computed from the measured values of Ï‰ (z) and R (z) using eq. (7). The result obtained at three different axial distances from the collimating lens are presented in Fig. 4a.

The repeatability comes from the statistics of the ratio measurements. Stability of the laser source is the major component and could be iproved using a further power stabilization closedloop. The amplifier and voltmeter uncertainties are obtained 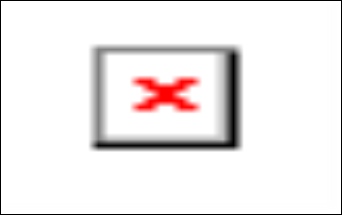 Table 1. Uncertainty budget for the measurement of the aperture radius (relative values).

from their calibration uncertainty and from the linear regression over the measurement range. The photo-diode linearity is taken from literature.

The reproducibility is taken from the independent repetitions. Among other factors, it accounts for small room temperature variation (<0.2oC), different axial positions, and repositioning of the aperture center relative to the beam axis.

The final relative uncertainty obtained for the measurement of area is 0.12%. The validation of the method is assessed by comparing the results to a certified value, as shown in Table 2. The certificates present a relative uncertainty (k=1) of 0.0065 mm2 for the area value and a calibration drift (rectangular distribution) between bi-annual measurements of 0.0410 mm2 is observed, composing a combined uncertainty of 0.415 mm2.

The relative error between the measured and certificated values is 0.11%, while the normalized error [15] is below unit, indicating the compatibility of the results. The coverage factor of the measurements, calculated for a confidence interval of 95.45%, is k=2.

The area of an aperture impacts directly on the determination of some radiometric and photometric quantities. This paper presents a simple and fast contactless method for characterizing an aperture area through the measurement of radiometric ratio of characterized Gaussian beams. The model is presented and the measurement uncertainty budget is discussed. The results are validated and indicate the method as suitable for metrology applications.