Male pawpaw tree have flowers that grow on short stalks (Chin et al., 2001). Carica papaya is a native of the tropics of America, perhaps from Southern Mixico and neighouring central American (Morton, 1987). According to Eno et al. (2000), pawpaw is the fruits, of the plant. Carica papaya belong to the genus carica. Preliminary qualitative and quantitative phytochemical analysis of ethanol and aqueous extracts of C. papaya showed the presence of many phytocompounds. These extracts were found to inhibit these eight test micro-organisms: Staphylococcus aureus, Pseudomonas aeruginosa, Salmonella typhi, Escherichia coli, Aspergillus niger, Penicillium notatum, Fusarium solani and Candida albican.(Okoye, 2011). Proximate analysis of leaves of C. papaya also showed appreciable quantity of ash content, crude protein, crude fat, crude fibre, carbohydrate and high calorific value (Okoye et al., 2011). In this present work, the author intends to study the preliminary pharmaceutical constituents of crude solvent extracts of flower and stalk of male Carica papaya since little or no work had been done in this area. The aim and objective of this work is to determined the phytocompounds present in flower and stalk of male Carica papaya; to extract the crude solvent extracts of the flower and stalk of male C. papaya and to find out whether the solvent extracts can inhibit the growth of ten pathogenic fungi. Carica papaya is composed of many biological active compounds, many of which are found concentrated in the latex, which is present in parts of the plant (Madrigal et al., 1980).

Within Carica papaya plants, the concentration of bio-actives will vary with position of plant, age of plant and cutivar. Also, concentration of bioactive differs between male, hermaphrodite and female plants. Female plants exude more latex than hermaphrodite and male plants. Carica papaya latex is rich in cystein proteinases which are proteolytic enzymes (caricain, chymopapain, papain and glucylendopeptidase) these constitute 80% of latex enxymes. Other enzymes present are glycosyl hydrolases (ï¢-1, 3-glucanases, chitiriases and lyzozynus) protease inhibitors (cystertin and ghtaminylcyclotrunsferces and lipases (Moussaoul et al., 2001). It was reported that intake of two table spoons of pulverized papaya seeds mixed with hot water twice per day is used in the traditional management of diabetes and obesity (Adeneye and Olagunju, 2009). Carica papaya (pawpaw) contains the enzyme papain, a protease used for tendering meat and other proteins (Morton, 1987). The fruits are popularly used and processed into juice and wine, and also cooked as vegetable (Gragson, 2001). The seeds are medically important in the treatment of sickle cell disease and poisoning related disorder. The lead tea or extract had a reputation as a tumor destroyer agent. The flesh green tea is antiseptic while the brown dried leaves are best served as tonic and blood purifier (Ezugwu, 2008). Due to its antioxidant and fibre content, it is used in treatment of ailments such as chronic indigestion, overweighing, obesity, high blood pressure (Everetta, 2003).

Flower stalk of male Carica papaya was collected from Adazi-enu in Anaochia Local Government Area of Anambra State, Nigeria. It was dried under air and mild sun-shine, for about three weeks and ground into powders. The ground sample was then kept in a clean polyethylene bottle until needed for analysis. Phytochemical and the extraction of the active components are determined by the methods outlined by Harbon (Harbon, 1973). The antifungal activity of flower and stalk of male C. papaya was determined by agar well diffusion method (Okeke et al., 2001). The zone of inhibition was recorded to the nearest size in mm (Norrel, 1997). After extraction of the active components using three different solvents separately (Ethanol, Water and N-hexane), the solvent extracts were evaporated to dryness at about 67, 98 and 66°C respectively in a water bath separately. 1, 2, 3, 4 and 5mg of dry ethanolic, n-hexane and water extracts were weighed into five different labeled test tubes differently. Then 10ml of the corresponding solvents used for extraction was added to the dried extracts to make 0.1,0.2,0.3,0.4 and 0.5mg/ml concentrations of the extracts.

The MIC of flower and stalk of male Carica papaya were found out by using 0.1, 0.2, 0.3, 0.4, and 0.5mg/ml of each extract which were added to test tubes containing 1ml of sterile medium. The tubes were then inoculated with a drop of microbial suspension and incubated for 48 hours at 25°C. Then 0.1, 0.2, 0.3, 0.4, and 0.5mg/ml of amphotericin B (for A. flavus, F. verticilloides, A. parasiticus, F. oxysporum and Fluconazole (for all candida was used for positive control and water for negative control respectively. The MIC value was determined, macroscopically after incubation in comparison with the growth and sterility control. MFC; the plates (petri-dishes) were divided into six different sections and labeled with the different concentration on the base of the plates, these were used to plate out the contents of each tube with the respective sections of the plate. The plates were incubated for 18 – 24 hours at 37°C after which the MFC were recorded. Three replicates were done for each extract concentration and control against the fungi.

Table 1 and 2 showed both qualitative and quantitative estimate of phytocompounds present in the flower and stalk of male Carica papaya. The phytochemical constituents of the flower and stalk are as follows: alkaloids 0.53 ± 0.01%, floaonoid 0.08 ± 0.02% saponins 0.37 ± 0.02% tannins 2.06 ± 0.01%, terpenoid 0.02 ± 0.01%, steroids 0.08 ± 0.01, phenol nil, cardiac glycoside 1.87 ± 0.02%. The flower and stalk of male Carica papaya contain an appreciable quantity of alkaloids. It could be used to remedy some diseases, depending on the type of alkaloids it contains. The presence of alkaloids signified the possession of medicinal values within the flower and stalk. Pure isolated alkaloids are used as basic medicinal agents and fungicidal properties. The presence of steroids in the sample indicates that it could be used to decrease the presence of cholesterol in the bloodstream. Saponins have been used in the treatment of cardiovascular disorders, they facilitate and ease the process of digestion and encourage the growth of beneficial bacteria within the intestine. Saponins also contribute to health and efficiency of the immune system by binding to germs and other pathogens as they enter the body. In this sense they function as natural anti-bodies. They are found to

be antimicrobial and are particularly effective when used to treat yeast a infections. The presence of cardiac glycosides in the flower and stalk of male Carica papaya indicates that it could be used, in the treatment of congestive heart failure and cardiac arrhythmia. 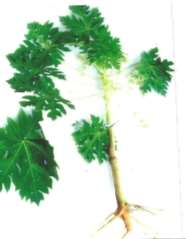 9.Adeneye A. and Olagunju J, (2009): Preliminary hypoglycemic and hypolopideimic activities of the aqueous seed extract of Carica papaya lin, in wister rats, Biology and medicine,pp.1-10.

10.Everetta B.M., (2003): Carpaine an Alkaloid of Carica papaya, Journal of Chemistry and Pharmac

To export a reference to this article please select a referencing stye below:

“Thank you UK Essays for your timely assistance. It has helped me to push forward with my thesis.”

If you are the original writer of this essay and no longer wish to have the essay published on the UK Essays website then please request removal.