Liver is the organ which is most important, and it plays a pivotal role in regulating various processes in the body, such as storage, metabolism and secretion. It has great capacity to detoxify toxic substances to nontoxic substances and synthesize useful principles (Shanmugasundaram et al 2006).

1.1 Anatomy of the Liver

The liver is a triangular organ that extends across the entire abdominal cavity inferior to diaphragm. Most of the liver’s mass is located on right side of body, where it descends inferiorly toward right kidney. The liver is madeup of very soft, pinkishbrown tissues encapsulated by connective tissue capsule. The capsule is covered and reinforced by the peritoneum of the abdominal cavity which protects liver and holds it in the place within abdomen. 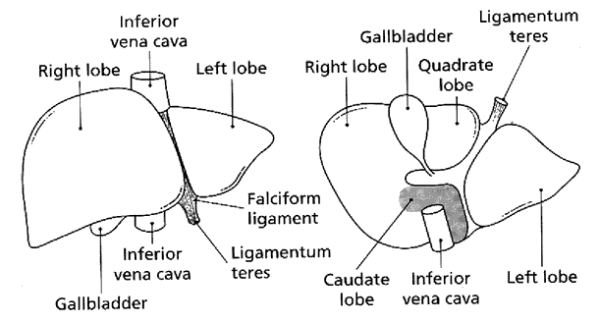 Liver disease is any disturbance in functions of the liver that cause illness. The liver is responsible for various critical functions in the body and when it becomes injured or diseased, loss of those functions can cause significant damage to body. Liver diseases are also referred as hepatic disease.

In 2000, cirrhosis was 1 of the leading causes of death in U.S.A. (United States). Alcoholic liver disease usually develops after large amount of alcohol intake. The long period during which alcohol excessively consumed, larger the amount ingested, high the rate of developing alcoholic liver disease and other liver problems.

Primary cancer of the liver which is a growing liver problem called primary liver cancer, it generally remains undetected until when this disease has reached the advanced stage because most people do not exhibit these symptoms early on.

Liver cirrhosis is generally considered to the fourth stage of the alcoholic liver disease, it is progressive condition which causes liver damage. chronic alcoholism is the most common cause of this disease. 40% of the 27000 people die from this disease. Cirrhosis is characterized by the replacement of normal healthy tissue by fibrous tissue, regenerative nodules and scarring of the liver that is liver scarring. The resulting hardening of the liver, hard liver interferes with the blood circulation in the body, it leads to irreversible damage to the liver and a completely loss of liver function.

Liver cyst also known as hepatic cyst, a simple liver cyst is a bubble (thin walled bubble), a fluid filled cavity in liver. A common liver problem, liver cyst can normal benign and pose no health risks. but in some cases, liver cyst may grow large enough to cause pain and discomfort in the abdomen, liver enlargement, infection of bile ducts, and bile ducts obstruction, that leads the cyst itself to become infected. In this case, it is necessary to drain and remove the cyst.

Fatty Liver Diseases (steatosis) are generally considered to the first stage of Alcoholic Liver Disease. The exact causes of Non Alcoholic Fatty Liver Disease (NAFLD) are unclear. Many researchers, however, believe that the metabolic syndrome—a cluster of disorders that increase risk of diabetes, heart disease, and stroke—plays a crucial role in development of NAFLD.

Liver fibrosis is generally considered to the third stage of Alcoholic Liver Disease, liver fibrosis is a liver condition which is very progressive. Liver fibrosis is characterised by the formation of the fibrous tissue, regenerative nodules and scarring of liver, which interfere circulation of blood and lead to loss of functions of liver. caused by chronic alcoholism and hepatitis C, cirrhosis is a disease which is degenerative disease of liver.

Signs and Symptoms of Hepatitis:

It is not directly the disease of liver but rather symptom that can occur as result of variety of diseases. Jaundice appears a yellow discoloration of skin and white of the eyes caused by the abnormal formation of bilirubin in the blood. Orange yellowish pigment bilirubin, bilirubin is the part of bile, it forms in the liver as a byproduct of old cells of blood. When there are many blood cells (RBC) dying for liver to cope with yellowish pigment forms in the body resulting in jaundice, it is visible sign of liver problems.

Jaundice is an indicator that a person is suffering from 1 of a many diseases including,

1.7 Mechanisms of liver injury by some hepatotoxic substances

1.7.2 Mechanism of liver injury by acetaminophen 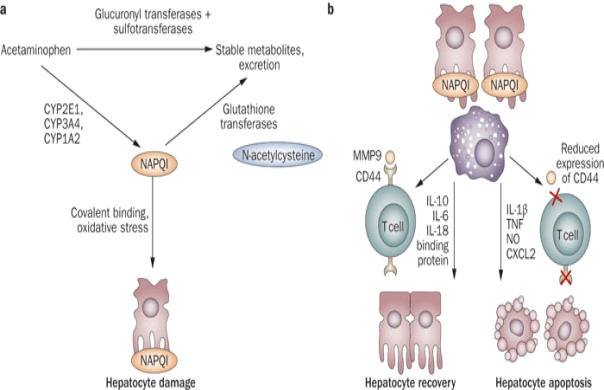 1.7.3 Mechanism of liver injury by alcohol 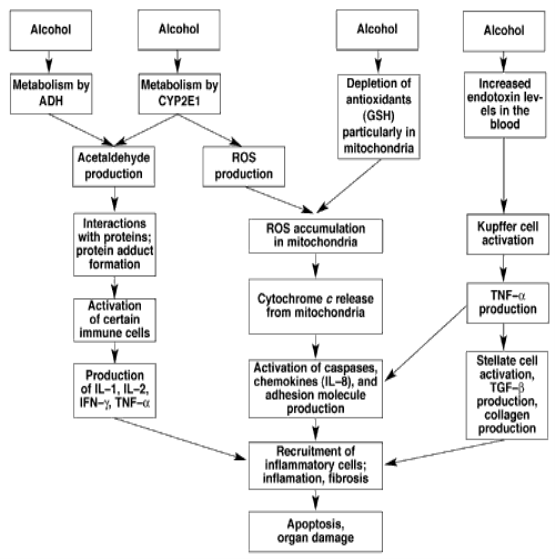 Fig-4 : Pathways through which alcohol (ethanol) can contribute to apoptosis.

Hepatoprotection is the ability to prevent damage to the liver.

One medicine of hepatoprotection is silymarin, derived from Milk Thistle which selectively inhibits formation of leukotrienes by Kupffer cells.

Table2: Plant tested in animal models for their hepatoprotective activity and found to be active.