Cheese is the dairy product which has been considered as important food as a point of nutritional value. Cheese has been produced by traditional procedures since past years ago in Iran. Lighvan cheese, the semi-hard cheese, is the most popular traditional cheese made from raw sheep’s milk in East Azerbaijan Province of Iran. Lighavan cheese is characterized by high taste acceptability and considerable amounts of proteins especially casein which is beneficial for indigestion disease [1] but it is naturally poor in essential fatty acids. A large body of scientific reports suggests that high essential fatty acids dietary intake associated with health and reductions in cardiovascular diseases.

Protucala Oleracea is an herb, known as purslane, which has considerable amount of poly unsaturated fatty acids. Purslane has been considered as rich sources of antioxidants, Vitamin A,B,C and E, beta carotene and essential amino acids as well as minerals such as potassium, calcium, magnesium and iron [5,8]. Fatty acid composition of purslane contains palmitic acid (C16:0), stearic acid (C18:0), oleic acid (C18:1 n9c), linoleic acid (C18:2 n6c) and α-linoleic acid (C18:3 n3). α-Linolenic acid is an ω3 fatty acid that is essential in the human diet as a precursor for the synthesis of longer chain fatty acids and the prostaglandin group of mammalian hormones. Oil seeds such as brassica, flax and soya are main sources of linoleic acid and particularly purslane seed contains considerable amounts of linoleic acids [10]. There are several reports in the literature corresponding to the health effects of omega 3 fatty acids on cholesterol reduction, arthritis treatment, mental depression therapy , burns healing and prevention of cancer cells growth[3]. Studies on omega 3 fortification of dairy products using fish oil have been found in the literature. However, the major problem with this kind of fortification is unacceptable sensory properties. The objectives of this study are i) to formulate of Lighvan cheese with purslane oil extract and ii) to study the effects of purslane fortification on characteristics of Lighvan cheese.

About 24 kilograms of sheep milk were hygienically filtered at 30 °C and then divided into four portions in steel containers. Purslane seed oil was mixed with sheep milk at three ratio of 1:5, 2:5 and 3:5 using Blender (MJ-176NR, National, Japan). Then rennet was added to sheep milk in order to curd formation after one hour. The curds were pressed in textile filter in order to separate whey. The curds were then cut longitudinally and transversally and pressed again to remove residue whey. The curds were moulded and placed in 15% salt brine after 3 hours. Finally, the moulded curds salted and stored in 11% salt brine at 8±2 °C for 3 months for ripening.

The sensory quality of cheese sample was evaluated by a 15 member panelist group who were skilled with quality attributes of food products. Panelists scored for sensory characteristics including color, odor, texture, internal and external appearance using a five point hedonic scale (1; very bad to 5; excellent).

The means of treatments were subjected to one-way analysis of variance (ANOVA) at 95% confidence level using SPSS 16 software. Sensory results were analyzed using nonparametric Fridman test at 0.05 significant levels. All analysis was performed at three replications.

There is no significant difference (p>0.05) between pH and acidity of samples due to purslane oil addition however, the significant reduction in pH and acidity after aging process was observed (p<0.05) which can be attributed to lactose fermentation and lactic acid production by bacteria (Table 2).

Protein content of cheese decreased significantly (p<0.05) during aging due to proteolysis. Proteolysis lead to increased solubility and water absorption of proteins due to releasing of polar groups such as amines and carboxylic groups of amino acids and peptides. Therefore, the more proteolysis causes the more soluble content, the more water absorption and subsequent the less total solid [5].

The results of gas chromatography were shown in Table 4. The considerable amounts of omega fatty acids especially omega-3 fatty acids in purslane oil was observed and the omega-6 to omega-3 ration calculated as 1.5 which is an ideal ratio. 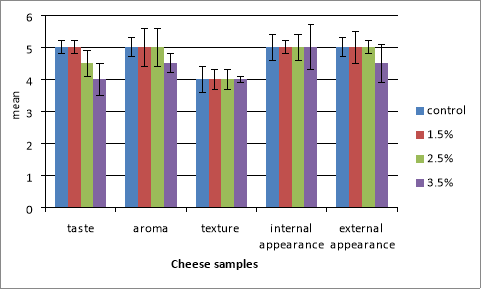 [M1]include detail of the method of milk analysis

[M3]Include detail of analysis and reference

[M6]Conflict of interest should be included