Critical Review of a Scientific Paper

Food demand from agriculture has never been higher due to the increasing world population. Issues such as climate control and built up overpopulated areas of the world limit the availability and resources to produce crops. The need to enhance the yield of agricultural crops, as well as breed crops with correct traits such as viral resistance to common diseases which can devastate many farmers produce has never been more pressing. As a world population we are a lot more conscious of how we produce are food ethically and need to consider the genetic diversity of crops within agriculture.

Over the past century improvements in sequencing technologies has allowed the mapping of the genome more specifically within plant species that are exploited for agriculture around the world. The first commercialised GM food was the ‘Flavr Savr’ tomato in 1994, and now commonly rice, maize, potato, soybean and many others (Hamilton et al. 2012; Vanburen et al. 2015). Next generation sequencing technologies have allowed us to target the genome sequencing genotypes and identifying specific alleles that express favourable phenotypes to improve crop populations from their wild-type relatives (Lin et al. 2014; Neves et al. 2013). Our understanding of the structure and function of plant genomes within agricultural plant genetic species has fuelled the development novel biotechnologies and approaches to their application for breeding. The isolation of genes that underpin characteristics of interest and how we can target these specific genes and transfer them into new varieties of crops to improve yield or enhance genetic disease resistance (He et al. 2014; Gurskin et al. 2012).

Until the last decade the focus has been on transgenic plants in agriculture, where isolated genes of interest from unrelated species are transferred into the genome of crop plants. Public acceptance of these crops has been controversial and forced the environmental food safety authority for GM organisms to strictly regulate the commercial use of these crops to protect the environment. Cisgenesis as a natural biotechnology approach that only utilises genes from the same plant or within the same species has tackled some of the associated problems within GM agriculture. Cisgensis was recently under review worldwide from the EFSA to be excluded from the strict regulations set for transgenic produced plants, it was finally defined that cisgenic approach to gene transfers is as safe as traditional breeding techniques (low level risk) (Hunter et al. 2014). Herewith in, the cisgenesis approach to integrating late blight resistant R genes to potato varieties is reviewed as a biotechnology tool, the ethical advantages it addresses as well as limitations to its application. 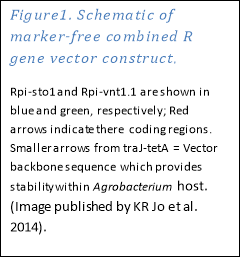 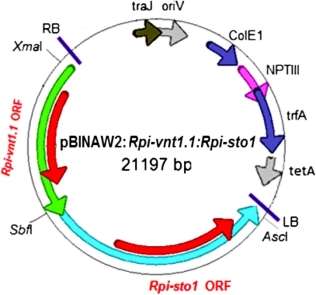 The study successfully introduced an ‘effective cisgenic marker-free transformation strategy’ into three varieties of potato. The transformed plants expressed two stacked late blight R genes, through the infiltration of agrobacterium effectors proved the R genes functionality. It was also confirmed that marker-free transformation is less prone to vector backbone integration compared to marker-assisted transformation (Jo et al. 2014). According to the recent conclusion of the European Food Safety Authority (EFSA) GMO Panel, cisgenic plants have a low risk level in comparison to transgenic produced plants. Therefore, the potatoes produced in this study, are an environmentally friendly alternative to both controversial transgenic agriculture, as well as the use of chemical agents to treat late blight disease (Jo et al. 2014).

Cisgenesis relies on the transfer of sequences from the same or related species, therefore, knowledge of specific sequences as well as its position and function in the genome is essential. In the future it is expected this knowledge will accelerate the application of this technology in place of transgenesis. One advantage of cisgenesis approach over more common techniques is reduced duration of selection steps and linkage drag (Hou et al. 2014). Although both transgenesis and cisgenesis use the same genetic modification techniques to introduce genes into plants, cisgenesis introduce only genes of interest from the plant itself or from a crossable species. Therefore, cisgenesis is not any different from traditional breeding and there is no environmental risk as associated with transgenic species.

The expression of a foreign gene or suppression of a native genes function allowed the movement of DNA between different species, forcing public perceptions of GMO food as ‘unnatural’. Although proved to be a promising tool for the enhancement of crops and economic development, the concern of public acceptance is a major limiting factor (Espinoza et al. 2013). Therefore, cisgenesis may be the future of plant breeding and crop development as it excludes foreign genes and strict regulation by the EFSA for GMO transgenes.

Despite considering all the advantages of cisgenic approaches there are limitations to its application. Namely the specific requirement of the regulatory sequences origin as well as the type and size of its constructs. For example, although achieving scab resistance in apples the difference in expression level R genes was dependant on using promoter from the same species or the native promoter of different lengths (Vanblaere et al.2014; Wurdig et al. 2015). Gene expression can also have a lot of variability, through random insertion of cisgenes. Therefore this random introduction of cisgenes into a host genome can be similar to that of transgenes, through loss of functionality of endogenous genes, reverting back to the same ethical issues cisgenesis aims to avoid. Finally, Jo et al. and similar studies report plants produced by cisgenic transformation methods report the integration of vector backbone sequences, therefore the specific number of genes copied and amount of vector backbone sequence transferred is an important factor (Vanblaere et al. 2014; Jo et al. 2014). In potato varieties Jo et al. failed to find a difference in vector backbone integration frequencies between different varieties or when marker-assisted only transformations were compared. However, when marker-free and marker-assisted vector backbone integration frequencies were compared, they found that marker-free transformation was associated with less vector backbone integration (Jo et al. 2014). Alternatively now there are new vectors developed containing buffer plant sequences within the backbone that limit the negative affect of unspecific vector backbone integration of cisgenes (Holme et al. 2013).

An overlooked issue by many experts in within the field is the implications of large scale introduction of transgenic crops containing resistance genes through the exploitation of antibiotic resistance. Many GMOs have a gene which relates to resistance to antibiotics inserted into their genome to serve as a marker. Bacterial resistance to antibiotics is already a risk associated with animal agriculture through feed being supplemented with antibiotics, and now antibiotic resistance may be further facilitated by the production of GM crops with these genes integrated in their genome. In potato varieties Jo et al. chose to pursue marker-free transformation of R genes which excluded the use of kanamycin as the marker for gene transfer. However, they also carried out the experiment with kanamycin as a gene marker as a comparison to the effect on vector backbone integration frequencies. Resistance to antibiotics could spread through the use of bacterial genes in the production of transgenic plants, also the genes often remain in the genome with no further use and future transgenic approaches should think about new ways we can remove these genes. It is possible that antibiotic resistance genes will migrate from transgenic plants to bacteria. There is then the possibility that antibiotic resistance bacteria produced from this pipeline could harm future human generations. Therefore, the future focus should remain on cisgenic strategies to GM plants that focus on marker-free transformation technologies.

Finally, according to the EFSA GMO panel cisgenesis is an environmentally safe approach to introducing new disease resistant genes and quality traits into plants. In different potato varieties it has been successful in the regeneration of light blight resistant potatoes by cisgene stacking, it is quicker to achieve than traditional agriculture and less controversial in the public’s perception than transgene GM crops. However, there are limitations in particular the unpredictability of cisgene integration and expression from a biotechnology point of view, but also the impact that may have on its regulatory status and changing public perceptions. In the future cisgene approaches may benefit from being combined with new biotechnologies and GMO techniques, to help reduce the concern with cisgene integration specificity, and develop improved agriculture approaches to disease and crop quality.