Knowledge of Causative Agent of Tuberculosis Among Patients

Knowledge of causative agent of Tuberculosis among TB patients in Jaipur district (Rajasthan).

ABSTRACT :Background: Tuberculosis is known since ages and its causative agent was discovered eight to nine decades ago and still misconception is present regarding its cause in india. India is facing TB epidemic at present. Objectives: to assess the knowledge of TB patients regarding causative agent of the disease. Results: Total 300 TB patients participated in the study, 75% were male and 25% were female, 60% were married and 25% were unmarried 15% were widow or widower, 77% were hindu and 22% were muslim,49% were literate and 51%were illetrate, 59% patients belonged to social class 4. 56% of patients knew the causative organism, 72% of the female don’t know the causative agent. 71% to 73% literate patients knew about the causative agent. Evil eye(56%), past sins(52%) were main myths as cause of TB. Lower socio economic class had more myths about the causative agent (23% in class 4) (58% in class 5). Conclusion: In poor country like india emphasis must be paid regarding awareness of tuberculosis among poor and low socioeconomic group people and patient.

Tuberculosis is turning out to be greatest epidemic of this century, so great is the concern about tuberculosis epidemic.

Tuberculosis is the oldest known disease to mankind and is caused by mycobacterium tuberculosis. The causative organism was discovered long back but myths regarding cause of tuberculosis is still prevalent not only in general population but also among the TB patients.

The present study aims to study knowledge of TB cases regarding causative agent of tuberculosis and myths related to its causation.

Study was conducted on the tuberculosis patients of the Jaipur treatment unit at DTC and at 20 DOTS enters:

The present study was conducted as District tuberculosis centre and randomly selected DOT centres of Jaipur treatment unit. Patients attending DTC and DOT’s centre to which they belonged to.

During the period of study a total of 173 TB patients were registered for treatment at District TB centre Jaipur of which 167 were included in the study while 6 refused to participate in the study.

The study was conducted by taking interview of TB patients attending DTC and DOT’s centre.

Data were collected in pre designed and pre tested proforma.

All the details of TB patients, which included socio-demographic and clinical profile of the patient such as age, sex, marital status, religion, education, occupation, socio-economic condition etc. Clinical profile consisted of symptoms of tuberculosis, past history, family history, diet, bowel habits BCG vaccination etc. Environmental factors such as type of housing was also taken in account. Revised B G Prasad classification was used to determine the social class of the tuberculosis patient in the present study.

Knowledge of the causative agent of tuberculosis patients regarding their disease and myths regarding causation was studied in pre tested proforma.

Observation showing cases distribution according to

Distribution of cases according to the

The difference was statistically significant.

Distribution of TB cases as per literacy status 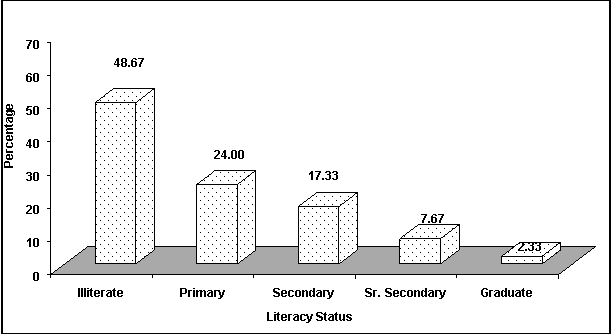 Observation showing myth about disease in relation to social class

The difference was statistically non significant.

Present study is an attempt to explore various socio-demographic factors and knowledge of TB patients regarding the causative agent of the disease, factors like personal habits were not taken. Study was carried out in 300 patients of tuberculosis attending DTC and DOTS provider.

intrusion (31.00%). The myth were prevalent more frequently in lower social class cases then upper class. Javed Ahmed khan (2006) 14 also found that 50% of the respondents had myths regarding the cause of tuberculosis.

Observation on correlation between knowledge of duration of treatment and literacy status reveal a positive correlation i.e higher the literacy higher the knowledge .It was 42.20% in illiterate while it was 85.71% in graduate.