Escherichia coli is a Gram-negative bacteria, which discovered and named after Theodor Escherichia and belong to Enterobacteriaceae family. E. coli is classified as same group as other bacterial such as Bordetella pertussis, Borrelia burgdoferi, Chlamydia trachomatis, Helicobacter pylori and many more species that are well known in medical world. E. coli infection can be found all over the world and more common in tropical country. This infection especially can be transmitted through diet because the infections are mainly due to contaminated food. Thus, this infection can be called as food-borned disease. An individual can get infected when consumed foods that are contaminated with dirt. However, not every individual that consumed contaminated food can get the infection. This is because, there are certain criteria to be fulfilled. Firstly, there must be source of infection, which means, E. coli must present in the food. Then, the individual is eating food contaminated with pathogen, as the main route of infection is through orofecal. Lastly, the body’s immune system cannot get rid of the pathogen, which eventually causing disease. This study is conducted to isolate, characterize and evaluate antimicrobial activities of E. coli in media and milk. A total of 3 sample is collected from the stock culture and labelled as EY1, E27 and E31. Isolation is made on the eosin methylene blue (EMB) agar and identified by using gram staining under microscope. To check for the antimicrobial activities, minimum inhibitory concentration (MIC), minimum bactericidal concentration (MBC) and time kill assay are done. Results reveals that the MIC value for E. coli is 128 and MBC value is 1024. Time-kill assay curve disclose that the reaction of tetracycline to the bacteria in media and milk slightly different but yet, able to achieve bactericidal effect of the drug.

Mastitis, or inflammation of the mammary gland, is predominantly due to the effects of infection by bacterial pathogens, although mycotic or algal microbes play a role in some cases (Ronald J. Erskine, 2016b). There are many factors that influence the development of mastitis including microbial, host and environmental (Contreras & Rodríguez, 2011). Any opportunistic microbes that can invade tissue and causing infection can lead to mastitis. The pathogen that use this transmission mode are Staphylococcus aureus, Streptococcus agalactiae and Corynebacterium bovis. They may spread from cattle to another cattle through aerosol transmission and invade the udder causing bacteremia. There is other route of infection, which is through the environment of the cattle. The pathogens that associated with environmental reservoirs are Escherichia coli and Trueperella pyogenes (Ronald J. Erskine, 2016a) 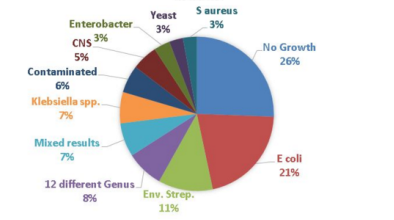 Once inside the udder, E. coli multiply rapidly, causing influx of the inflammatory cells. As neutrophils ingest and kill bacteria, endotoxin is released and along with other inflammatory mediators causes severe local inflammation. This inflammatory response is characterized by increased vascular permeability, changes in milk composition and damage to the mammary epithelial cells, which may result in the characteristic watery or serous milk secretion.

The treatment for mastitis include administration of antimicrobial via the intramammary route or parentally (Gruet, Maincent, Berthelot, & Kaltsatos, 2001). Unfortunately, despite the best possible antimicrobial treatments, failures of bacteriological cure are common, especially for S. aureus mastitis, and antimicrobial resistance (AMR) is considered one of the reasons for low cure rates (Candrasekaran et al., 2014).

There are other reasons, which are the management and iatrogenic factors, drug factors, mastitis-causing organism factors and also mammary gland factor. However, the major reason is the insufficient contact of the antimicrobial with the mastitis-causing organisms at the site of infection is a major cause of mastitis treatment failure (Kiro R. Petrovski, 2007). Some bacteria such as S. aureus can localize inside host cells thus restrict the concentration of drug in the cells. E. coli can form biofilms, a condition where the microorganisms structured within an array of exopolysaccharides (EPS) and adhering to a living or inert surface with the function of protecting the microorganisms in stress environments (Costa, Espeschit, Pieri, Benjamin, & Moreira, 2014). The sessile cells arranged in biofilms tend to be more resistant to antimicrobial therapy compared with plantonic free cells, due to the slow diffusion of the antimicrobial in the inner layers of the biofilm (Costa et al., 2014). Also, to be effective, drugs need to be free and not inhibited by other components. Some drug may have high affinity binding towards protein. Thus, some component in the milk, for example, casein, may bind to the antibiotic and reduce the free the drugs in the udder. In the case of S. aureus infections during lactation, it has been estimated that the bacteriological cure rate is only within 25% to 50% only (Kiro R. Petrovski, 2015).

Escherichia coli is one of the major cause of mastitis development. Based on the research done in Wisconsin dairy farm, 21% of the mastitis case result from the E. coli infection. Despite of all the treatment given, the therapy has not been successful. Hence, the aim of this study is to investigate the antibacterial activities of Tetracycline against E. coli from clinical mastitis in growth media and milk.

This study is designed to answer either tetracycline can demonstrate equivalent antimicrobial efficacy against E.coli in growth medium and in milk?

This study is constructed to answer the hypothesis, either tetracycline demonstrates equivalent antimicrobial efficacy against E. coli in growth medium and milk.

This study is conducted to achieve a set of following objectives :-

Mastitis is swelling of the mammary gland that frequently caused by bacteria ingoing the teat canal and moving up to the udder and there are two types of mastitis, which are contagious mastitis and also environmental mastitis (Dairy Australia, 2007). Contagious or cow-associated mastitis generally related to the bacterial infection that causing disease, which are Staphylococcus aureus and Streptococcus agalactiae (Dairy Australia, 2007). The bacteria present in the udders or on teat skin and spread either by splashes of disease-ridden milk or sprays during stripping on milker’s hands or teatcup liners and by cross flow of milk between teatcups (Dairy Australia, 2007). Meanwhile environmental mastitis occur when the bedding which used to house the cattle is contaminated (Ronald J. Erskine, 2016a). It is not only concern on the bedding of the cattle, the infected soil, manure, calving pads and water host bacteria can also causing this disease to developed (Dairy Australia, 2007).

Mastitis come in two forms, which are subclinical and clinical, however, subclinical form is rare to be find (Ronald J. Erskine, 2016a).

Escherichia coli is no longer bizarre in our communities. This Enterobacteriaceae is a Gram-negative bacteria. It cannot sporulate and can be found commonly in the intestine. This bacteria have a characteristic of glucose fermenting, acid producing, nitrate reducing and oxidase negative. It also have facultative anaerobic characteristic which can grow easily at 37°C. Physically, E. coli is small in size, approximately 1-2 µ x 30-30 µ, with flagella. It has no capsule and also no mucus layer. There are several antigen structures that play an important role for the identification of this bacteria, which are K antigen, H antigens and O antigen. K antigen can be found in the capsules, a compound in the group of polysaccharide. H antigen can be found in flagella and O antigen can be found in the cells or the body as it is a substance in the group of lipopolysaccharide and polysaccharide (Wiwanitkit, 2011).

Despite the fact that most of E. coli are harmless and beneficial, there are species that have the ability to cause disease, and they are divided into groups according to the mechanism of pathogenesis. The groups are enterohemorrhagic E. coli (EHEC), enteroinvasive E. coli (EIEC), enterotoxigenic E. coli (ETEC), enteropathogenic E. coli (EPEC) and enteroaggregative Escherichia coli (EAEC). EHEC is a group that can cause haemorrhagic colitis and can end up with a specific complication called uremia haemolytic syndrome. EIEC or also known as Shiga toxin-producing E. coli (STEC) causes diarrhea. ETEC is a major cause of traveler’s diarrhea and diarrhea in group of infants in developing countries. E. coli toxic products from the gut causes problems to the patient’s body. EPEC is a major cause of diarrhea in infants and EAEC is a new pathogen (Wiwanitkit, 2011).

Mastitis is the inflammation of the mammary gland and udder tissue, and is a major endemic disease of dairy cattle. It commonly occurs as an immune response to bacterial invasion of the teat canal by variety of bacterial sources present on the farm, and can also occur as a result of chemical, mechanical or thermal injury to the cow’s udder (AHDB Dairy, 2017).

This study is conducted in laboratory of Faculty of Veterinary Medicine in University Malaysia Kelantan. The bacteria sample, which is Escherichia coli is isolated from the stock samples of the laboratory. There are three samples, which are EY1, E27 and E31.

3.3 Isolation and identification of Escherichia coli

The bacterial colony on the nutrient agar is then cultured on the eosin methylene blue (EMB) agar and gram staining is done.

Minimum inhibitory concentration (MIC) are determined using the broth micro dilution method. A range concentrations of antimicrobial is prepared in a 96 well microplate, followed by inoculation of bacteria culture to yield approximately 5×105 cfu/ml in a 250Î¼ final volume. The plate is then incubated in 37°C for 18 hours. The lowest concentration of antimicrobial that inhibit bacterial growth is taken as MIC value. 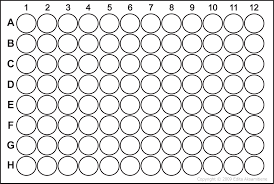 Tube containing designated concentration of antimicrobial will be inoculated with 105 cfu/ml of bacteria in Nutrient agar, followed by incubation at 37°C, in an incubator shaker at 200 rpm. At 0, 1, 4, 24 hour post inoculation, 50µ aliquots will be taken out, serially diluted in saline and plated on Nutrient agar. Plates will be incubated for 18 hours at 37°C followed by colony counting. An antimicrobial is considered bactericidal if there is ‰¥3-log decrease in cfu/ml of bacteria counts, as compared to the growth control.

4.1 Isolation and identification of Escherichia coli

Colony of E. coli on EMB agar is small to medium circle in size and shape, with dark green and glossy, raised and polish appearance. 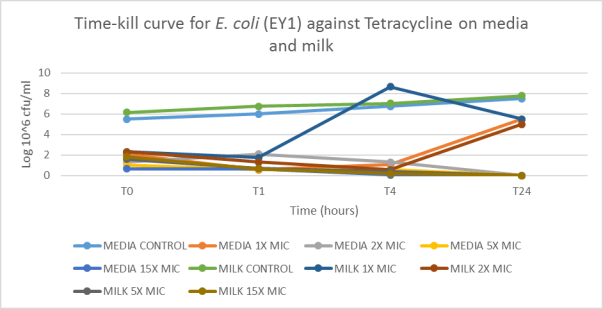 Figure 3 : Time-kill curve for E. coli (EY1) against Tetracycline on media and milk 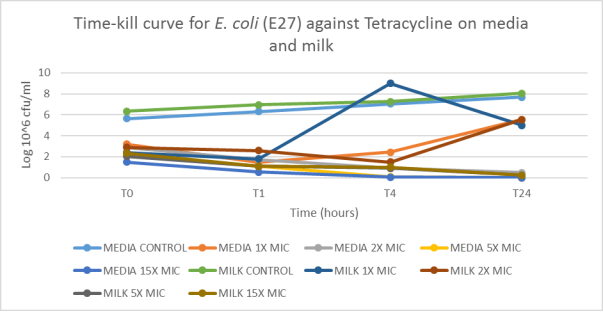 Figure 4 : Time-kill curve for E. coli (E27) against Tetracycline on media and milk 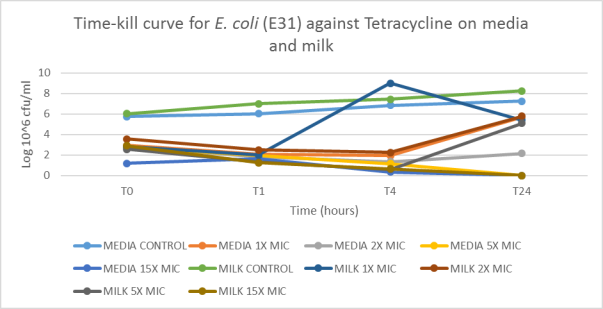 Figure 5 : Time-kill curve for E. coli (E31) against Tetracycline on media and milk