Introduction to Immunoglobulins: Structure and Research

The immunoglobulins or antibodies are a group of proteins present in the serum and tissue fluids of all mammals. Antibodies are produced by cells (B type) on interaction of membrane antibody with antigens. Secreted antibodies moves in the blood; and serve as the effectors of humoral immunity by neutralizing antigens. They therefore also constitute an element of the adaptive immune system. Secreted antibodies circulate in the blood stream where they acts as the effectors of humoral immune response by searching and neutralizing or eliminating antigens. The immunoglobulins are present in highest concentration and most easily obtained in large quantities from blood serum. The antibodies produced are specific to each of the epitope. 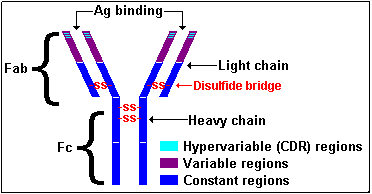 The development of Molecular Biology and production of mono-clonal antibodies have allowed us tohave diagnostic tools with a great sensitivity and specificity. They are known as KITS, which are both easy and simple to use and read.

The techniques developed in recent years are:

Among the above methods available now, we can point out,those that have more possibilities of performing serologic studies on a large scale level, and without the need of highly technical resources.

The popular methods used are:

Few types of ELISA are used for the detection of ANTIGENS and ANTIBODIES.

So far the following types of ELISA are used for the detection of specific antibodies:

It is the common method used for antibody detection.It involve thecoating of the ELISA plate with the antigen against the specific Ig’s that may be present in the serum. The antigens can be from viral or bacterial product, and or even whole virus molecules. It is more common to use only those proteins with immunological interest, instead of using all the antigenic mixture.Thenext steps will include the addition of serum, incubation and washing;addition of the conjugate, incubation and washing and at last, the addition of the substrate, stopping the reaction and reading the results. 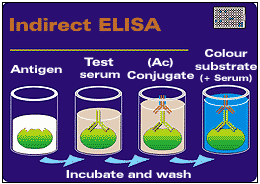 This technique is also very common for the detection of specific antibodies. We have an I.G (monoclonal of polyclonal) of a known antigen. This antigen has previously been bound to the plate.It is known as competitive ELISA because the serum is incubated with the antigen previous to its incubation with the antiserum bound to the plate. Therefore, both compete for the antigen. 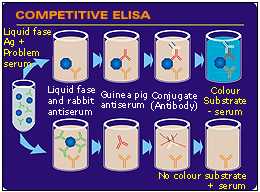 Immunoelectrotransference, “Immunoblotting ” or “western blot”is an immune-enzymatic technique used for the detectionof specific antibodies.This method is recommended whenever it is necessary tostudy a large number of sera which have not given proper results using other techniques. 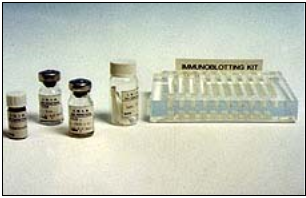 In order to obtain the antigen-nitrocellulosesheets, proteins are first separated by polyacrylamide gel electrophoresis (SDS-PAGE). Later, these proteins are electrically transferred from the gel to the nitrocellulose sheets. These sheets are then cut and will act as the antigen substrate. Each one of these pieces are then incubated with the test sera and washed. Then, a labelled anti-immunoglobulin (IgG or IgM) is added. If there is any antibody bound to the antigenic protein, they will be revealed by the addition of the conjugate.One or more specific precipitation lines will be observed depending on the existence of specific Ig’s against one or more proteins.

It is a very sensitive and easy technique to perform and to understand. No special equipment is needed.

This technique is especially for the study of small numbers of sera.As it does not require special tools, it is possible to perform it in laboratories with little equipment. 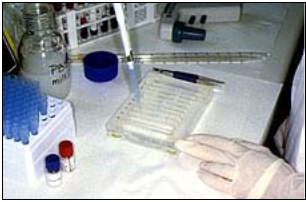 Fig. The last step of the method. We can observe thedifferent lines where testand control serum have reacted.

Indirect immunofluorescence or immune-peroxidase are techniques that use the specifity of histology and the sensitivity of the immunological methods.

These techniques usually involve the use of cell cultures infected with the virus or bacteria from which we need to know whether or not the unknown sera have antibodies. In the case of Ig’s being present in the unknown sera, after an incubation period, those antibodies will bind to the infected cells. This reaction can be observed with a fluorescence or ordinary microscope after the addition of an anti-immunoglobulin labelled with peroxidase respectively. 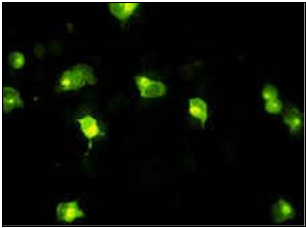 Fig. Indirect immunofluorescence technique. Mammalian cells infected by the swine fever virus. Antibodies bound to the infected cells can be seen, the areas of the cell with higher viral replication have more bound Ig’s and therefore, a higher light intensity.

This method is known asthereference method for every serological study. The use of this technique has made it possible to measure the capability of Ig’s present in the test sera of neutralizing the biological activity of an antigen.

Inseroneutralization, we go a step further, and the potential of the serum of neutralizing the biological activity of an antigen can also be known.These tests are very common in labs when theassessment of the capability of a serum against microbial toxins, or viruses is needed. They are however, highly specific and sensitive and are considered as reference methods for every serological evaluation.

In the case of viruses, we can determine the capability of a given serumfor neutralizing the virus infectivity on a susceptible cell line.A viral solution, of a uniform concentration and which has previously been in contact with different dilutions of the test serum, is added to the cell culture. The observation of the cells at different times allows one to see if these cells are being infected or not by the virus, using either conjugated dyes or looking for the cytopatic effect. We can measure, in this way, the serumcapability for neutralizing the virus. 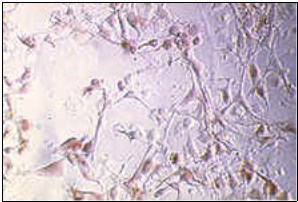 Each of these five protein groups moves at a different rate in an electrical field and together form a specific pattern. This pattern helps in identifying diseases. 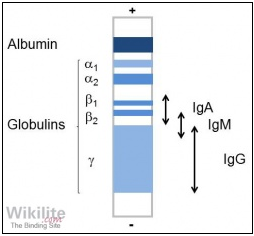 Fig.Schematic of serum protein electrophoresis.The position of polyclonal Ig’s in normal serum and the anode (+) and cathode (-) are indicated.

This method is an alternative way to agarose gel electrophoresis for the measurement of serum proteins. Protein separation is performed in a liquid buffer system. The separated proteins pass an U.V detector that measures absorbance at 200 to 215 nm to determine the protein concentration.

For this method, a patient’s serum is applied to several wells of an agarose gel, and after electrophoresis, specific antisera are overlaid on individual lanes of the gel. These antisera are typically against IgG, IgA, IgM, and λ, although other specificities may be useful for identifying unusual bands. A lane fixed with acid is also included for comparison. Following removal of the antisera, gels are washed and stained with Brilliant Blue or Amido Black. Although IFE is non-quantitative, it is regarded as the “gold standard” method to confirm the presence of a monoclonal protein and to distinguish its heavy and light chain type. 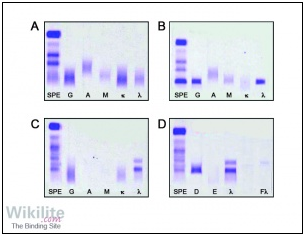 Immunosubtraction can be used in place of IFE for typing the majority of monoclonal bands, but it is less sensitive. In this technique, Ig’s against IgG, IgA, IgM, are incubated with serum aliquots, then CZE is performed to determine which reagent remove an electrophoretic abnormality. 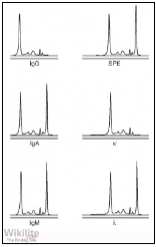 The measuring of urine proteins by CZE is more challenging than serum analysis because urine have electrolytes, organic acids and other metabolites that can interfere with the test. To prevent this, urine samples need to be pre-treated by filtration, or dialysisand for this reason, the routine use of urine CZE is limited.

Measurement of Ig’s is performed for two reasons:

In 1950s, the radio-immunoassay (RIA) was developed by Rosalyn Yalow and Solomon Berson. This group was later awarded the Nobel Prize in 1977 for developing an RIA to detect and measure blood glucose levels in diabetic patients.