How Do Technological Advancement, Combined With Our Extensive Knowledge From The Human Genome Project, Help Us To Eliminate Genetic Diseases?

The aim of this project is to answer the question ‘how do technological advancements, combined with our extensive knowledge from the Human Genome Project, help us to eliminate genetic diseases?’ I want to find out more about genetic diseases, such as Myotonic Dystrophy and Cystic Fibrosis, and the stage that scientists are at in curing patients. I’ll explore the ethical issues of possible ‘gene editing’ in the future. I’ve carried out a lot of research on the background of genetic diseases and one could speculate that gene editing could eliminate diseases within the next decade or two, if technologies continue to expand at the current rate. This report has enabled me to recognise the work of scientists and furthermore, encouraged me to pursue a career in STEM[DS1].

History of the Human Genome Project

The Human Genome Project was a ground breaking discovery in the understanding of how we evolved as human beings (Carey, 2015). Their aim was to map and understand all the genes for building human beings by going through 3.2 billion bases. A genome can be defined as “an organism’s complete set of DNA, including all of its genes” (Genetics Home Reference, 2016). This research has clearly revolutionised genetics as the cost of gene editing and testing has decreased by 99 percent (Kurzgesagt, 2015[DS2]).

My research is based on secondary qualitative research from published journals, scientific reports and books. It didn’t cost any money to conduct. I’ve approached my question through Jennifer Doudna’s lens on future technology such as CRISPR to eliminate disease. “They’re all diseases that have known genetic causes, and we now have the technology that can repair those mutations.” (Jennifer Doudna, 2016). I’ll apply CRISPR in contrast to current technologies used.

What is the genetic code?

DNA is made up of many nucleotides containing three molecules: a deoxyribose pentose sugar, a phosphate group and a nitrogenous organic base. These bases are Cytosine (C), Adenine (A), Thymine (T) and Guanine (G) (Toole, 2015). 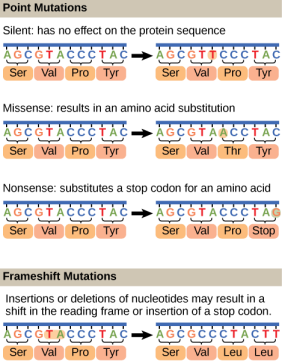 How does genetic codes link to genetic diseases?

Three bases code for an amino acid. The code is non-overlapping which reveals there’s only twenty different amino acids present in proteins. Changes to the base sequence or quantity results in a ‘mutation’. There are four types of mutations that can occur during DNA semi-conservative replication: nonsense, missense, silent and frame shift. Any of these changes to the DNA sequence leads to ‘gene mutation'(Toole, 2015). This is shown in figure one.

Figure one – Effects of single base mutation In DNA Code[DS3].

How does Myotonic Dystrophy differ from other genetic diseases?

This genetic disease has different characteristics to a ‘typical dominant disorder’. Normally, the symptoms of genetic diseases don’t get worse when they are passed on from parent to child. This is the case with Myotonic Dystrophy. The disease is unique due to the gene containing small sequences of DNA that’s repeated multiple of times. Type 1 is caused by a mutation in the ‘DMPK gene,’ which appears to regulate the production and function of structures inside muscle cells. The mutated DMPK gene contains three DNA nucleotides – CTG – repeated in the ranges from 5 to 34. On the other hand, type two is caused by ‘CNBP gene’. This consist of four DNA nucleotides – CCTG – repeated fewer than 26 times (Carey, 2015).

What technologies have been made to eliminate Myotonic Dystrophy?

Currently, there’s no cure or specific treatment for Myotonic Dystrophy but there is ‘a promising step forward toward muscular Dystrophy treatment’ (the University of Rochester Medical Centre, 2012). Their research involves reversing the symptoms by creating synthetic compounds that will eliminate a buildup of toxic RNA in muscle cells. This was tested on mice and results showed that symptoms were reduced for up to one year. According to Charles Thorntom (2012), “these results give us strong encouragement about the possibility of developing a treatment.” Is testing mice the best research method? How will we know if the research would eliminate the genetic disease in humans[DS4]?

What are the implications of the research?

As the cure is still to be found, it is not possible to test on humans due to “limitless RNA targets involved in disease; the question is how to find small molecules that bind to them,” (Disney,2012). Because of ‘limitless RNA targets,’ it complicates the target amplification system. This is an enzyme-medicated process, therefore, millions of targeted enzymes are copied within several hours; the copies made would be used for research. As a result, the techniques are sensitive to contamination. This could lead to false-positive reactions which cause implications for future research (McClatchey, 2002).

What has been done to prevent ‘false-positive reactions?’

Perhaps the University of Rochester Medical Center should consider using Kaspersky Lab technology to test for false-positive reactions. The machine can automatically create files for results that are common or not. Results that are not common are ignored and won’t affect research. This upgrade in technology would make their results more clear (Kaspersky Lab, 2015). But should they accept the false positive results as side effects of their research? Could these false positive results be significant in their research?

Cystic fibrosis is an inherited disease causing a build up of mucus to damage the body’s organs. Mucus is a lubricant that protects the linings of the airways and digestive system. People with cystic fibrosis, produces thick mucus that clogs the airways causing problems with breathing. Over time, it can permanently damage the lungs by producing scar tissues. Scar tissues are thicker and less elastic than normal tissues so the tidal volume is reduced (Genetics Home Reference, 2016).

If you’re missing two letters out of 3.2 billion of the sequence, ATT CTT GATT, you have cystic fibrosis (Sabatini,2016). Mutation in the CFTR gene disrupts the flow of chloride ions across cell membrane, which is necessary to produce freely flowing mucus (Genetics Home Reference, 2016).

What technologies have been made to eliminate Cystic Fibrosis?

From the Human Genome Project, we know which genome codes for lungs, and with the help of stem cells and tissue engineering, scientist believe it is possible for human lungs to be ‘successfully grown in a lab for the first time,’ (Medical News Today, 2014). Due to shortage of donor organs, using stem cells (which are able to differentiate in to other cells) is a desirable approach for organ replacement. Whilst the field of tissue engineering has successfully reconstructed cartilage frameworks for ears and bones in the skull and face; they struggle to use stem cells to grow lungs that’ll survive and function properly (Lui etal.,2013). This means maintaining blood and oxygen supply inside the body without clotting (The Guardian, 2015). Will growing organs give a better quality of life to those who suffer from Cystic Fribrosis? Would this be as effective as gene editing technology?

CRISPR-Cas9 is a technology, using bacteria, that enables parts of the genome to be cut out and replaced, or to add parts of DNA sequence.The CRISPR-Cas9 system consists of two key molecules: enzyme Cas9 (a ‘molecular scissors’ that cuts a specific location of DNA) and RNA (The New York Times, 2015).

Figure three (in appendices) will show the steps of gene editing. Once the DNA is edited, the mutation causing the genetic disease would be eliminated (Your Genome, 2016).

Layla recovered from leukaemia thanks to gene-editing technology. ‘For children as young as Layla, the cure rates are only 25 per cent’ (Sujith Samarasinghe, 2015). As a result, her doctors proceed to ‘gene therapy’ to removing immune cells from her body and genetically engineer them to attack cancerous cells (Nature, 2015). She received T-cells (exposed to a DNA-cutting enzyme called a TALEN) from a healthy donor. The process was done so that the modified T-cells injected were not recognised as ‘foreign.’ T-cells are significant because receptor – CAR19 – helps programs the T-cells to kill any cells with protein – CD19 – found on cancer cells. Is the process this simple?

There’s a risk of the enzyme being cut the wrong place resulting cells turning cancerous (New Scientist, 2015). Research on gene editing is now expanding to minimise this risk. Soon “there are a whole bunch of other disorders we cure” (Qasim, 2015). Since she is the first person to be cured using gene editing does this mean it’s safe to proceed this process on other diseases?

As the technology is at its early stages, scientist are creating a modified version of Cas9 that’ll change specific letters to remove the mutation that caused genetic disease. In most eyes, gene editing is unjust since the technology is limited to individuals. Researchers are mainly testing on reproductive cells to prevent children from having the condition. They’re plan to carry human trial by the end of 2016. Do we know enough information for humans to participate as the effects are unpredictable? (Your Genome, 2015).

According to David Baltimore (2015) ‘we sense that we are close to being able to alter human heredity.’ CRISPR is opposed by a lot of people as they want new laws and regulations to protect the human gene pool of our entire species. The process is irreversible. If technology advancement and researchers have enough information to create modified humans, we have to consider the cost. This is a valid point as wealthy parent maybe tempted to treat unwanted characteristics that are not actually diseases. Do we want stronger, smarter, taller children with specific colour eyes? Could designer babies be the answer to eliminate genetic diseases? These are the questions that pose potential flaws is the advancement of technology[DS5].

Gene editing research and technology advancement is the step forward in eliminating genetic diseases. From my selective mention of genetic diseases such as Myotonic Dystrophy and Cystic Fibrosis, we can see technologies such as growing organs using stem cells and synthesis of compounds to cure disease are making progress. The focus of gene editing will an effective treatment if the trials are successful. This is the beginning of revolutionising human genome and eliminating genetic disease as a whole. 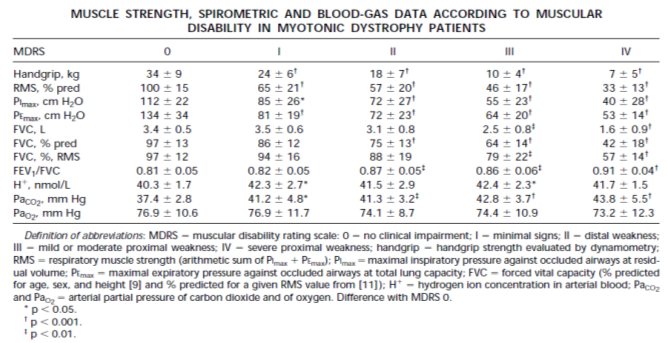 Figure two – Results of muscle weakness in Myotonic Dystrophy patients in contrast to those who don’t have the disease. 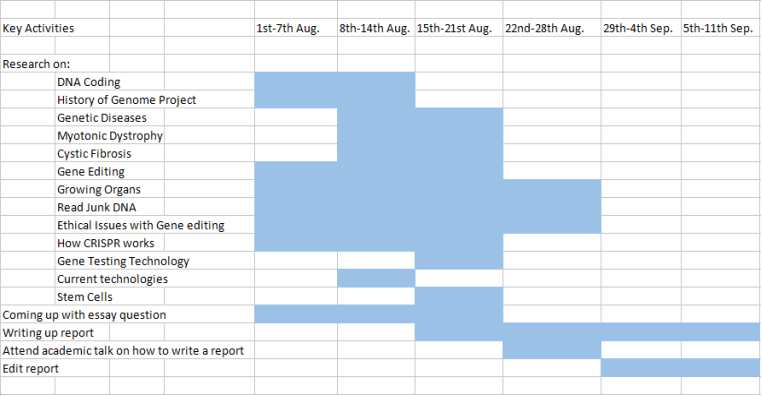 Deoxyribonucleic acid (DNA) – a molecule that is consist of instructions for an organism needs to develop, live and reproduce.

Non-overlapping – each base in the sequence is read one.

Dominant allele – the disease is present even if the individual only has one copy of the allele.

False positive – A result that indicates that a given condition is present when it is not.

Cell membrane – the partially permeable membrane surrounding the cytoplasm of a cell.

Stem cells – an undifferentiated cell of a multicellular organism which has the ability to differentiate to repair and replace damaged tissues and organs.

Tissue -Â  group of similar cells working together to perform a special function.

Organ – Combination of tissues that are coordinated to perfrm a variety of functions. Eg. Heart, lungs.

T- Cells – Type of lympocyte matured in the thymus gland that is involved in humoral immunity.

Enzyme – a protein with a specific active site and tertiary structure. It acts as a biological catalyst to bring about a biochemical reaction.

Cas9 – a protein that guides the RNA to enter cells without undergoing transcription and translation.

[DS1]Good start. In future, try to practice academic language. Such as “This paper willâ€¦” or “The research in this paper will discussâ€¦” avoid using I, me, we my etc.