Aim: To assess the action of homeopathically prepared Aconitum napellus in a 6CH, 12CH and 30CH potencies in the treatment of generalized anxiety in an experimental model using rats.

EPM is a commonly employed anxiety model because it is based on two conflicting tendencies: 1) the ability of rodents to explore new environments and 2) their aversion to high and open places.

EPM is comprised of two closed arms perpendicular to two open arms. The closed arms are so named because they have a lateral and an end wall, whereas the open arms have no walls. Anxiety is measured by the total rate of exploration of open arms, thus, increase of the permanence time and number of entries in the open arms is considered an index of anxiolytic action of drugs.

The animals were individually tested and conditions remained consistent. Each rat was filmed for five minutes and the data was recorded by software PlusMZ.

Rats are placed in a previously unknown sand square divided in smaller squares that allow assessing the exploratory activity of animals to observe their locomotor activity.

Each rat was filmed for five minutes and the data was recorded by software OpenFLD. This test assessed the number of crossed squares.

Treatment with Acon induced anxiolytic effect, but did not exhibit linear progression according to ascending potencies. The number of entries in the open arms increased with dilutions 12cH and 30cH compared to the control (Figure 1). The animals treated with dilution 12cH also exhibited higher permanence time in the open arms (Figure 2). 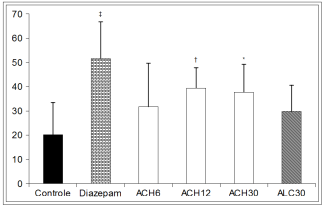 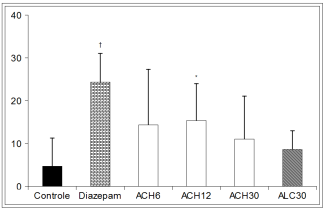 A complementary parameter used to evaluate whether the response of the rats indicates anxiolytic effects of the investigated treatments is the number of entries in the closed arms . In this study, it exhibited significant difference in the groups treated with Acon 12CH and 30CH and the positive control diazepam (Figure 3). These results suggest that the anxiolytic effect did not interfere with the mobility of the animals in the EPM. 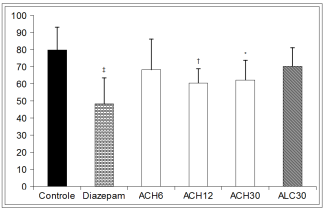 Treatment with Acon did not show any change of the locomotion of the rats compared with both saline solution and diazepam controls (Figure 4). 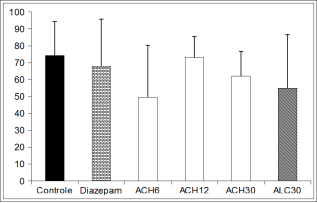 Conclusion: Potencies 12CH and 30CH of Acon exhibited anxiolytic effects on the CNS in an animal experimental model without affecting motor coordination.

Anxiety is an emotional state comprising of psychological and physiological components. Measurable parameters that can be used to assess the treatment of anxiety is limited in rats because rats cannot communicate feelings of apprehensive anticipation, insecurity, fear or the flood of thoughts that accompany anxiety. Testing physiological components of anxiety such as increased arterial blood pressure, increased breathing rate and increased heart rate would also prove to be very challenging. It could also be argued that anxiety in rats cannot be compared to the complexities of human anxiety and that although the tests yielded positive results in rats it’s not enough to validate its application in human beings. However, being rats they cannot be subjected to bias treatment. Rats also behave in a similar way and their reactions and behavioural patterns are more predictable therefore yielding more consistent and reliable results. They are also able to be kept in highly controlled environments where they are unaffected by outside influences that could have an effect on their anxiety levels. EMP and open field tests are acceptable and valid pharmacological models used to measure anxiety in rats, therefore their application to homeopathy and the positive results yielded should contribute towards evidenced based medicine for homoeopathy.

Aim: To evaluate the effectiveness of Gelsemium 5CH and 15CH on provoked anxiety in healthy volunteers, in comparison with placebo.

Methodology: A double-blind, single-centre, randomized, placebo-controlled study was conducted. 180 eligible volunteers from both sexes aged 18 to 40 years with no history of psychiatric disorders were included in the study. Participants were distributed homogenously into 3 groups and randomly allocated to receive Gelsemium 5CH or 15CH or placebo. During the study participants took five doses of globules: a morning and an evening dose on the 2 days preceding the study and the last dose on the morning of the study. Performance of a Stroop colour word test (SCWT) was used to provoke anxiety. The main criterion used to quantify anxiety was the State measure of the State-Trait Anxiety Inventory (STAI-S). The STAI is a questionnaire widely used in clinical practice and clinical research; it consists of 2 parts of 20 questions each and takes about 15–20 minutes to complete. An anxiety visual analogical scale (VAS) was used as secondary outcome criterion. VAS is an auto- evaluation scale composed of three sub-scores: self- confidence, cognitive anxiety and somatic anxiety. The Trait part of State-Trait Anxiety Inventory (STAI-T) was also measured and performed a continuous recording of arterial pressure, heart rate and respiratory rate. In the days preceding the study it was checked with the volunteers that they did not experience any stressful events.

On the fifth morning before the main study visit participants were asked to complete the STAI-S, STAI-T, EEAC forms and VAS scale, whilst in the comfort of their own homes in calm surroundings. These measures were used as the baseline data.

Conclusion: Gelsemium 5CH and 15CH had no effect on anticipatory anxiety in the conditions used in this study, whatever the judgement criteria used.

Discussion: There were many noticeable flaws in the study. Homeopathic principles for prescribing were completely ignored. There was a gross misunderstanding how homeopathy works; it seems homeopathy was applied with the expectation of a physiological effect. There was also a misunderstanding for the indication of the remedy. Gelsemium is indicated for anticipatory anxiety, the test was set up in a way that actually tested acute, provoked anxiety, whereas anxiety leading up to the test pertains more to the indication of the remedy. Participants who had no history of psychiatric disorders were included in the study; the study would’ve been better suited to individuals with a long history of anticipatory anxiety. The study should’ve been set up in a way where participants were told they were going to have to perform a test and anxiety levels leading up to that event should’ve been measured. I believe the potencies used, which act more on a physical plane, is also a noticeable flaw. Anticipatory anxiety is a mental condition with physiological components, higher potencies which have an action on the mental and physical plane should have been administered. More importantly inclusion into the study should have been set up to promote Similimum prescribing; a questionnaire that listed indications of the remedy should’ve been used to match participants for suitability.

Because the study doesn’t follow homeopathy principles and there seems to be a general misunderstanding of how homeopathy works I don’t believe this article can contribute to evidence based medicine for homeopathy.