History of RedMed and Developments for Sleep Apnea

ResMed is a principal developer, manufacturer and distributor of pioneering medical equipment for the administration and treatment of respiratory disorders, with its major focus on obstructive sleep apnea (OSA). It was started with a moto to commercialize a treatment for OSA in 1989. It has corporate offices in 26 countries distributing their range of products in around 100 countries throughout the world.

In 1981 Colin Sullivan and his colleagues introduced their invention of continuous positive airway pressure (CPAP) for the treatment of obstructive sleep apnea (OSA). CPAP was a practical, effective, and dependable treatment for the millions of OSA victims around the world. Dr Peter Farrell who was the Vice-President of R&D of Baxter Healthcare and Director of Baxter Centre for Medical Research Pty Limited (BCMR) in early 1980s is an expert in bioengineering area. He sensed tremendous business opportunities of CPAP when he meet Sullivan in an academic conference in 1986, and then CPAP treatment was commercialised by Peter Farrell and Colin Sullivan through BCMR. Three years later, Farrell planned to acquire the rights of certain technology relating to CPAP treatment from BCMR and as a result, ResCare Holdings Limited, which had a $1.2 million registered capital, was registered in Sydney in August 1989.

In order to experience a better development, company changed its registration place to Delaware, USA in 1994 and changed its name to ResMed as the original name ResCare was already registered in USA. Through the CPAP technology, the company started gaining success in American medical market and got listed on the NASDAQ (1995) national stock market, New York Stock Exchange and Australian Securities Exchange (1999). As a result of these listings, ResMed became the biggest company in the sleep disordered breathing (SDB) marketplace in late 1999.

With the success in SDB marketplace, company paid more attention to do research in newly related areas and in 2000. Clinical research showed that untreated SDB was very likely a pivotal factor in both stroke and cardiovascular diseases. This finding helped ResMed in conducting further research in stroke and congestive heart failure (CHF). The novel outcome of this research has attracted Australian Technology Award for the company in biotechnology area in 2000. Eventually, the company was ranked number I in Medical Products Company according to Investor’s Business Daily in 2001.

Continuing innovation, the company has released a series of updated products between 2003 and 2005. Bubble Mask –Series 3 and Constant CPAP were released in 2003 and the historically significant product S8, which received Australian Design Award in 2006, was introduced in 2005. The extensive product line made company become the largest corporation that focused exclusively on providing therapies for improving the quality of sleep in late 2010.

In order to adapt rapidly changing world market, company made changes to its management structure by creating a new strategic business unit. It revised roles in the contemporary commercial, manufacturing, supply and corporate staff sections in 2011. These measures improved the working efficiency and promoted the company to continue as a leader in SDB market.

With the victory over the injunctions in Germany against patent infringing behaviours by APEX and BMC in 2013, ResMed finally become a global leader in SDB market and other respiratory disorders. 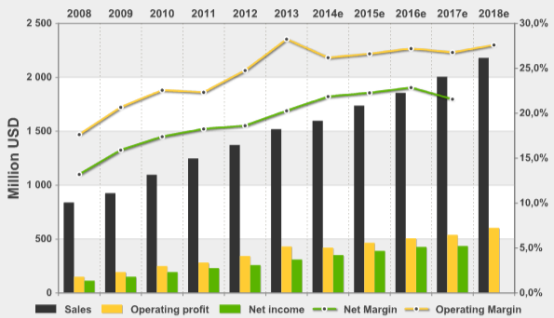 The graph shows ResMed’s healthy financial growth in recent years and actively estimates a steady and consistent development of ResMed in the following several years.

The share price of ResMed on ASX fluctuated frequently within most recent one year, while it continues increasing from ~2.50 to ~5.50 since 2012. According to analysts’ report, the increase was majorly due to:

ResMed is committed to ongoing investment in R&D and product enhancements. During FY13, they invested approximately US$120.1 million on research and development activities, which represents approximately 8% of net revenues.

Furthermore, in quarterly financial result ended March 31 2014, R&D expenses of ResMed were US$31.4 million for the quarter, or 7.6% of revenue. R&D expenses increased by 12% compared to the quarter ended June 30, 2012. Such R&D investment was even favorably impacted by the depreciation of the Australian dollar against the U.S. Dollar.

Graph 1.3 The change of ratio of ResMed’s R&D expenses to total operating expenses 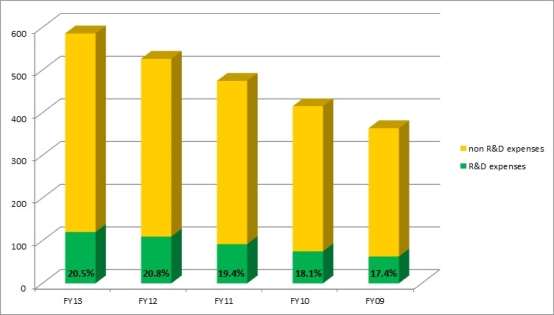 ResMed is regarded a leader company in developing, manufacturing, and distributing the medical device for treating sleep-disordered breathing (SDB) and other respiratory disorders. In spite of this, ResMed is highly competed with various companies in its principal markets, the US and Europe. ResMed’s fierce competitors may include Respironics, DeVilbiss, and Nellcor Puritan Bennett. ResMed relies on its four strategies below to compete with them.

One of the strategies aims to develop market is expand geographic presence. ResMed markets its products in over 70 countries. ResMed sells their products by several approaches such as distribution network, direct sales force and independent manufacturers’ representatives. ResMed fills out its distribution network by acquisitions. For example, ResMed recently acquired Mediserv and Unimedis, which both are distributors of equipment for the treatment of SDB and respiratory disorders. These acquisitions help ResMed increase market opportunities and enhance the distribution of products in Europe. Similarly, ResMed had acquired some companies in the US to develop market and strengthen its competitiveness in local. This may suggest that ResMed expands the scope of market to increase the revenues by acquisitions. Despite ResMed’s frequent actions of acquisitions, ResMed decides to acquire which company for marketing their products based on regional awareness of SDB, physician referral patterns, consumer preferences and local reimbursement policies. Currently, ResMed has wholly owned subsidiaries in Australia, the UK, the US, Germany, France, Spain, Finland and Sweden. 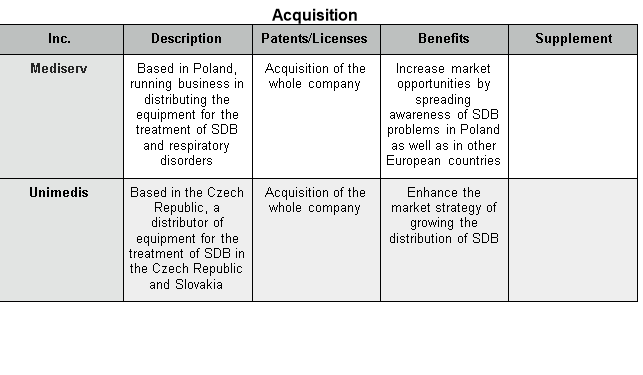 ResMed expects the SDB market will grow up by increasing the awareness of the SDB among the general population and physicals because sleep clinics, home health care dealer and the third party who sells the products to patients are the primary customers. In addition, ResMed tends to deliver the knowledge and information of SDB to the interest groups or organisations such as the National Stroke Association, the American Heart Association and the National Sleep Foundation, which may help to spread the awareness of SDB in relation to other diseases and the importance of SDB.

ResMed is also seeking the potential applications of their technology. For example, the recent studies show that SDB has been confirmed as a cause of high blood pressure or relevant disease and obstructive sleep apnea (OSA) is associated with both stroke and congestive heart failure. Followed by the more studies in medical journals, ResMed has more market opportunities of developing the new applications. 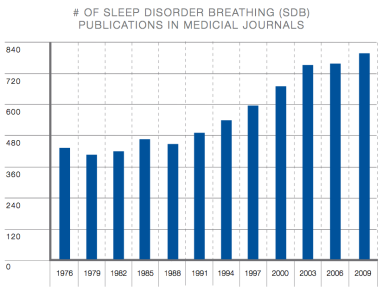 Basically, ResMed pursues things to be simple and adopt the low-risk strategy by staying at the areas of their expertise. ResMed is in a strong competitive market, in which the consolidation is a trend inducing ResMed implemented the strategy of acquisition to maintain their competitiveness and broaden the scope of market. In order to seek more market opportunities and enhance reputation, ResMed puts a great effort on product development and innovation as well as increasing public and clinic awareness of SDB.