At what speed will the helicopter fall by adding more paper clips to its base (the bottom)?

My hypothesis is that the more paper clips added to the base of the helicopter, the speed will increase.

For our helicopter lab, we first measured two meters on the wall so we have will drop the helicopter at the same place. Then, Eliah will drop the helicopter and Holly will time how long it takes with the stopwatch. We repeated this step for three mores tests and with two, three, four, five and six paperclips attached to the base. Then, we found the average speed of each paperclip and recorded our results into a graph.

To make our test a fair test, we made sure it’s the same person timing and dropping the helicopter. Also, we always dropped the helicopter from two meters. 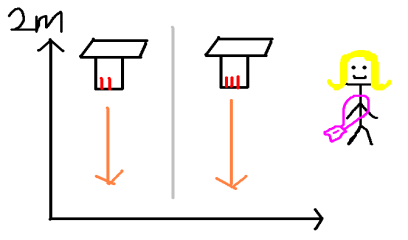 Amount of Paper Clips on a Helicopter

To get the mean, you have to add the three trials together then divide it by three. For example:

To get the speed, you have to divide 2 by the mean of the three trials. For example: 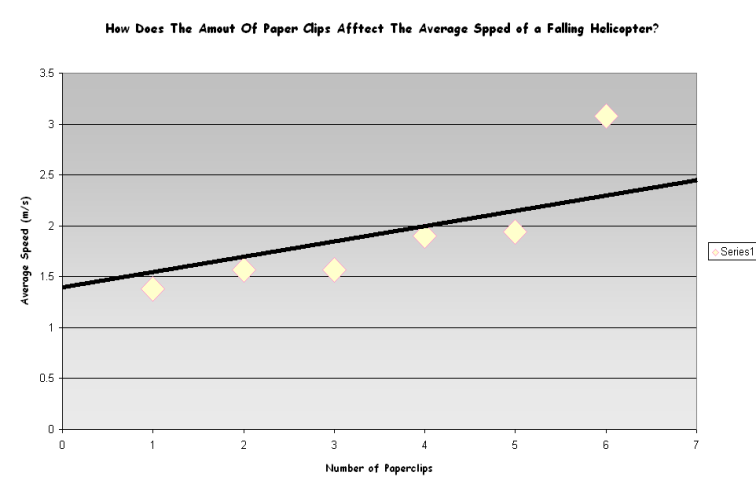 According to our graph our hypothesis was correct: The more paper clips added to the base of our helicopter the more the speed will increase. Our data corresponds with the line of best fit really well up until our last data point which was 6 paper clips and was 3.08s. It is much higher than all the other points, I think this one particular piece of data is unreliable because it dose not correspond to the rest of the data as well as the graph. This may be because our timing methods when timing the last one was different then the rest of our graph. To make sure that this would be an accurate experiment, we did three trials for each paper clip(s) and then calculated the mean and speed.

Our Method was reliable and extremely accurate because for each amount of paper clip, we had three trials so we could create an average speed. Also, we used the same person for timer and the dropper of the paper helicopter.

If I could re-do the experiment, I would have made the height higher, such as 3-4m so we could have more accurate readings.