Genetic engineering has developed at a very dramatic rate. It was pioneered in 1973 by Stanley Chen and Herbert Boyer. They invented the technique of DNA cloning, which allowed genes to be transplanted between different biological species. Their discovery signalled the birth of genetic engineering. As a result Herbert Boyer and Stanley Cohen received half million dollars for their efforts in invention and innovation. They further founded Genentech,Inc where Herbert Boyer became the director. Dunne and Eisenbeis (1969).

Genetic Engineering involves extracting DNA (deoxyribonucleic acid) from one organism and combining it with that of another organism to produce new hereditary traits to the organism receiving the donor’s DNA. It has been used for so many different purposes such as manipulation of embryos and cloning, Dunne and Eisenbeis (1969). In the field of animal science, recombinant protein in the form of genetically engineered bacteria is being used to increase milk production in lactating cows. Eennaam(2008).

Commercial companies are deriving therapeutic proteins, such as monoclonal antibodies, from the milk of transgenic cows, goats, rabbits, and mice, and using them to administer drugs in treatment protocols for rheumatoid arthritis, cancer, and other autoimmune disorders.Glenn(2013).

For example, mice have been used in genetic engineering for biological and biomedical research and have generated a lot of vital information about human diseases.Alzheimers and eye diseases have been bio medically researched through transgenic animals including livestock species.It has also been extensively used to study animal diseases notably mad cow disease,Eennaam(2008).

Genetically modified crops have used to produce vaccines and other medicines. For example, potatoes have been modified to produce edible vaccines against E. coli bacteria which causes diarrhoea.This allow cheap and easy distribution of the vaccine,Bioethics (2014).

Crops can be genetically modified to contain additional nutrients that are lacking in the diets of many people, especially in developing countries. One of the examples is Golden rice, which has been modified to have high level of β-carotene. Β-carotene helps to prevent vitamin A deficiency. This disease causes child blindness and it affects 14 million children under the age of five according to Nuffield council on bioethics( ).

A research says that half of the cotton grown in china in 2002 was genetically modified.This was done to kill the pests (bollworm) that devastates the cotton crops. Before then farmers used to apply toxins by spraying the cotton crops which caused a lot of health issues for the farmers who often applied the pesticides without any protective clothes on. The benefit of this modified cotton was: a reduction of pesticides use, increase in yields and profit and good health benefits for the farmers,Bioethics (2014).

In addition to all these benefits, genetic engineering can be used to save endangered species such as the American Chestnut tree, which is currently being repopulated by Chinese-American chestnut hybrids- specifically engineered with a genetic resistance to the chestnut blight—the deadly fungus that nearly decimated native populations in the early 1900s,Glenn (2013).

Researchers from Cornell University created a genetically modified human embryo which is believed to be the first modification of a human embryo. Through their research, the scientists said that modified embryos could be used to research human disease. If these embryos were allowed to developed, it can be used passed to prevent diseases. It might also be used for other reasons such as physical appearance, intellectual prowess and personality enhancements,Keim(2004).

Below shows a diagram of the first genetically modified human embryo: 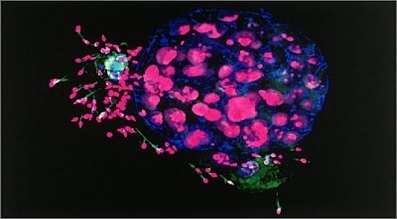 Also one of the areas where genetic engineering has been used is in cloning. It’s the process of producing similar population of genetically identical organisms. Cloning has been used in plants, animals and human cells and tissues. One benefit of cloning human tissue is that it can be used to grow vital organs, which can be used to replace ailing organs. One example is the heart disease, if the heart of a patient becomes dysfunctional, an exact replica can simply be grown to replace it through cloning. Department of science and technology (2014)

In 1997, artificial cloning was used to clone dolly the sheep, it was the first cloned animal. Producing animals that are genetically engineered can provide human products such as insulin or organs for transplant. Cloning animals can also be used for research purposes and to pursue basic knowledge about cell differentiation, BBC (2014).

Genetic engineering is a testament of advances that science has made in biotechnology. Although the benefits to genetic engineering cannot be ignored; it carries with it some controversies and misgivings: about how the sick should be treated and how research should be conducted.Risks, safety and ethics has been at the forefront of these debates leading to a whole discipline of Bioethics,Bryant(2007).

Ethical theories in genetic engineering involves recommending concepts of what is right and wrong and also basing it on moral diversity. In all what is right in one’s culture might be wrong in another and vice versa. There are different types of ethical theories: utilitarianism, situation ethics, discourse ethics and many others,Wikipedia (2014)

Utilitarianism broadly supports the general well-being and not just the treatment and prevention of diseases. In the field of genetics, utilitarianism supports genetic testing, genetic selection of offspring that will lead to optimal benefits, gene therapy and genetic enhancement, Savulescu and Birks(2012).

Savulescu and Birks (2012) outlined the following: according to utilitarianism, an action is right if, and only if it maximises well-being; utilitarianism entails that it is morally required to kill an innocent person if it promotes overall well-being; for a utilitarian, allowing a person to die or suffer when that could have been avoided is just as bad as directly inflicting suffering or killing the individual.

Situation ethics is a moral decision based on love; which means desiring and acting to promote wellbeing of the individual or persons involved, Barn (2011).Moral judgments are decisions, not conclusions and decisions ought to be made situationally not prescriptively. In making these decisions the well-being of people, rather than love principles should suffice, BBC website archives.

Discourse ethics is a communication centered framework where all the opinions of willing participants are equally important.Stasbury,(2009),outlined the following: in this ethics the principle of generalisation serves as a rule of argumentation which assumes that all participants involved in the discourse are rational, and able to reach the same reasonable judgment while accepting the consequences and side effects that may arise; for satisfaction of all affected individuals interests, only norms that are considered moral by all affected participants, and those involved in the discourse will be assumed valid.

Churches and ethicists have various opposing views about what is right or not. Some churches like the Catholics, has publicly supported the adult and umbilical cord stem cell research and the church leaders were the first to applaud the discovery of the amniotic stem cells and to ask for further research. The church however opposes the embryonic stem cell because the preparation of the stem cells destroys the embryo which is against their beliefs and they view it as gravely immoral,(Peter Baron, march 2011).

Consider the case of Euthanasia which involves the deliberate action to end or assist in ending the life of another person on compassionate grounds,Lavery et al,1997.Is Euthanasia morally right or wrong ?What will be the logical judgments of a utilitarian, a situation ethicist and a proponent of discourse ethics?

Proponents of discourse ethics may not reach any practical conclusion on euthanasia as there could be varying opinions on the case at hand.Pro-life participants in the group will object outright the idea of deliberate death. Because all opinions in a discourse ethics must be respected they may not be any consensual agreement on the decisions.

All three ethical theories can lead to three contradicting views; however it can help provide a guiding framework for genetic engineering. Genetic Engineering has played a vital role in industrial biotechnology, agriculture and medicine but it also has its risks as well.

In Agriculture, GM crops could compete or breed wild species which threatens biodiversity. Also some genes may escape and find their way into other members of the species or other species. Example is if herbicide-resistant genes found their way into weeds.Makula (2014).

Also in medicine, drug testing on participants is still very crucial because lives are always at risk. As stated on US National library of medicine website, where an issue has generated a considerable debate since 1999, when an 18 year old Jesse Gelsinger died while he participated in a gene therapy trial at the University of Pennsylvania. It goes to show that with all the advances the world of science is making in genetic engineering it also carries with it a lot of risks.

It is obvious that genetic engineering presents both challenges and opportunities. In view of the various ethical issues involved in genetic engineering, there should be the need to understand beliefs and doctrines as this allows coexistence within and across societies, and prevents social conflict. A technology’s acceptance should not only be on technological soundness but on how it is perceived to be socially, politically, economically and morally feasible from the viewpoint of the wider society. An understanding of ethics helps determine what information is needed by society and how to deal with different opinions, Pockect K.No18 (2006).

”God has given humankind a mandate to care for the earth and its resources, utilising them wherever feasible for the good of others”, noted Bryant(2007).There is a case for the use of genetic engineering in our world, ethics can define the limits of what should be acceptable for the greater good for the wider society.