Flesh fly belongs to the family of Sarcophagidae, and the name is a Greek word that consist of two word which are: sarco means flesh and phage means eating and commonly known as flesh flies. They differ from most flies in that they are ovoviviparous (their eggs hatch at the moments that they are expelled), and they opportunistically deposit a maggots on carrion (meat), dung, decaying material, or open wounds of mammals, hence getting their common name (Marshall, 2012). Some flesh fly larvae are internal parasites of other insects such as Orthoptera, and some, in particular the Miltogramminae, are kleptoparasites of solitary Hymenoptera; although most of the more 3000 world species of Sarcophagidae probably develop om invertebrate tissue as scavengers, predators, parasitoids or kleptoparasites (Marshall, 2012) . 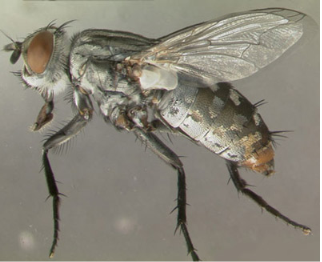 The flesh fly, (Sarcophagidae: Diptera) is an important ectoparasite as it causes myiasis in human and other mammals (Dutto and Bertero, 2010). It has become a great concern in many parts in the world such as Bangladesh as it is a serious agent affecting human health, livestock, fish and other animal food processing factories. The maggots of this species take their nourishment from unprotected fish and meat, thus contaminate them and reducing their nutritional value (Majumder at al. 2014). The adults of most genera are easily recognizable by the gray thorax possessing longitudinal black stripes (Fig. 1).

Some members of this diverse genus are significant parasitoids of locusts as well as cicadas while other have the ability to locate their hosts by sound. It can be found in everywhere in the world, even in city parks and backyards, where some breed abundantly in mundane debris (Marshall, 2012).

Sarcophagids are a very useful tool for the forensic entomologist, like many other insects, they can be used to estimate the time of the death of the person (Nishida 1984, Oliveira-Costa and Mello-Patiu 2004). Weather conditions and geographic location are key factors to consider when using insect evidence to estimate the time death time of a corpse as the variation associated with time of colonization after death is not completely understood at this time (Catts 1992).

The reproductive organs of insects show an incredible variety of forms, but there is a basic design and function to each component so that even the most unusual reproductive system can be understood in terms of a generalized plan. Individual components of the reproductive system can vary in shape, position and number for example, the number of ovarian or testicular tubes, or sperm storage organs so on; are different between the insect groups, and sometimes even between different species within a genus. Knowledge of the homology of the components assists in interpreting structure and function in different insects (Gullan and Cranston 2014). The General male reproductive system is shown in the below picture (Fig: 2). 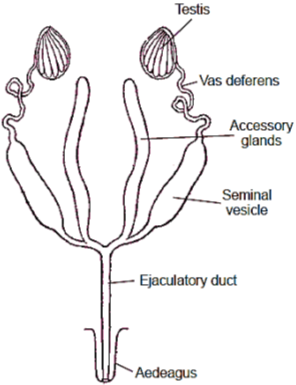 It is important to note here that variation among insect reproductive systems is great since they are the most diverse organism that live in our world. Even closely related species are often isolated from one another through small variations in the morphology of reproductive organs which prohibits interspecies mating and to keep each species his existence. However, a generalized system can be constructed that closely represents all reproductive systems insects. Sometimes it’s very difficult to see the reproductive systems of the insect we dissected and we do not want to be alarmed if you we are unable to locate the structures on your dissected specimens. We need to be familiar with differences in male and female genitalia and be able to identify structures when given a diagram. The best approach to understand the insect reproductive systems and the insect internal morphology in general is to preform insect dissection; in this way one can see clearly if he/she follows the correct procedures to form the dissection.

The male adult fly was captured from Ongku Omra college area and the flesh fly was kept alive in the Center of Insect Systematic Center (CIS) in the Faculty of Science and Technology at UKM until the dissection time. The insect were killed with an alcohol which the concentration was 70%. 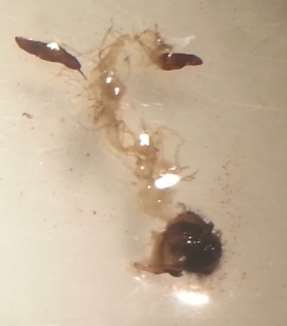 Eshcherich (1894) reported that there was pairs of tubular type accessory glands in the male genital system of Musca and Tabanus. Also Keuchenius reported that in Culex. In the current dissection of the flesh fly the accessory glands are almost similar to that in Musca and Tabanus. The base part of the ejaculatory duct showed a muscular sacâ€like structure known as ejaculatory sac, located before the aedeagus. Hewit (1912) reported the ejaculatory sac in Musca and Keuchenius (1913) also confirmed the existence of ejaculatory sac in many Dipteran species. The flesh fly dissection showed the occurrence of a small muscular sacâ€like which located behind the male genitalia. The end part of the ejaculatory duct was enclosed and it forms the male aedeagus. After the insect was dissected and the reproductive system was removed from the rest of the body and it has been drawn and the (Fig: 4) below indicates the reproductive system that was observed under microscope of the flesh fly. 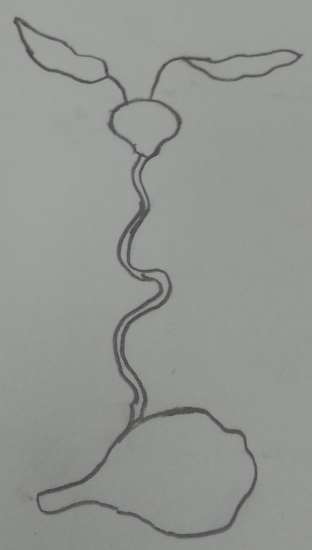 The dissected insect had the same structures and features of Boettcherisca peregrina (Diptera :

Sarcophagidae) that was dissected by Majumder (2014) and the picture below (Fig: 5) shows the similarity of the two reproductive systems. 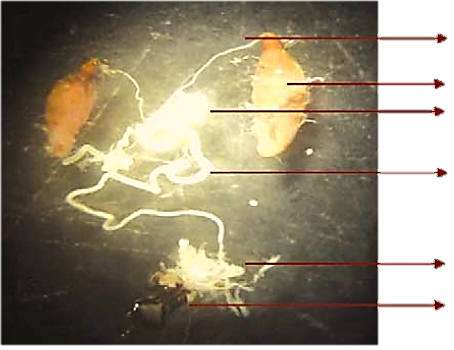 In conclusion carrying out an insect dissection experiment will enhance one’s knowledge of the insect’s internal morphology as well as identify and learning about the different parts that associated. It will also give opportunity to understand the functions of specific structures that are associated with the insect reproductive systems.

Oliveira-Costa, J. & De Mello-Patiu, C. A. 2004. Application of Forensic Entomology to Estimate of the Postmortem Interval (Pmi) in Homicide Investigations by the Rio De Janeiro Police Department in Brazil. Emergence 234(3978): 165.175.