Transmission of HIV-1 exhibiting reduced susceptibility to protease and reverse transcriptase inhibitors is well-documented, but is evolving for integrase inhibitors and is limited for the fusion inhibitor enfuvirtide. We describe here a case of transmitted 5-drug class resistance involving protease, reverse transcriptase (nucleoside and non-nucleoside), integrase, and fusion inhibitors in an antiretroviral naïve patient that subsequently was successfully treated based on the optimized selection of an active antiretroviral drug regimen.

Drug susceptibility can be a key determinant in choosing an initial antiretroviral (ARV)regimen for patients who are naïve to ARV therapy.The selection of aregimen in which individual components have less than full susceptibility can result in virologic failure.Transmission of HIV-1 exhibiting resistance to protease (PR) and reverse transcriptase (RT) inhibitors is well-documented[1-3] andbecause of this,DHHS guidelines recommend baseline genotypic resistance testing to guide drug selection in patients who are ARVnaïve[4]. However, given the relative newness of the integrase (IN)inhibitor class and the limited use of enfuvirtide (ENF), transmitted resistance for these drug classes is less well-defined[5-7]. To date, two cases of raltegravir resistant HIV-1 transmission have been reported in the literature[5-6].

Although transmission of virus resistant to more than one ARV class occurs less frequently than a single class[2-3], when it occurs, the selection of a baseline regimen can bemore challenging. Such was the case in 2005 when a New York City man acquired a dual tropic, multidrug-resistant HIV-1 strain[8], during a time when fewer therapeutic options were available. Here, we describe the first documented multidrug-resistant HIV-1 strain containing variants that exhibit resistance to five ARV classes. This reportnot only demonstrates one of the earliest cases of transmitted resistance to the integrase strand-transfer inhibitor (INSTI) class, but also exemplifies the need to develop a detailed resistance profile prior to initiating therapy.

Initial phenotypic analysis for ENFsusceptibility (FC 6.31)fell within 0.2 log10of the biological cutoff(FC 6.48). This cutoff is based on a reference population of ENF-naïve baseline isolates from the TORO clinical trials [10]. Given the proximity of the measuredENF susceptibility of the patient sample to the biological cutoff and considering both the broad distribution of the susceptibility of the reference population and the inherent variability of the phenotypic assay (±3-fold), further analysis was warranted. Consequently, envelope gp41 sequencing was performed on 44 molecular clones generated from the virus population. Phenotypic analysis to determine ENF susceptibility was performed on 20 of the 44 clones that had unique gp41 sequences relative to the consensus sequence of the virus population. Two clones, (#10 and #25), exhibitedreducedENF susceptibility(FC 46 and >MAX, respectively), well above the biological cutoff. The gp41 sequence of these two clonesrevealed novel substitutions (Q40R, N43S) at amino acid positions previously associated with ENFresistance [11]. Co-receptor tropism testing indicated that 19 of the 20 selected clones exhibited R5 tropism, consistent with the R5 tropism determination for the overall virus population.

Based on resistance and co-receptor tropism testing, the patient was placed on a regimen of ritonavir-boosted darunavir, tenofovir/emtricitabine, and maraviroc, which successfully suppressed viral replication to <200 copies/mL at 2 months that was maintained one year post-initiation of treatment. CD4 count improved from 376 cells/mm3 at diagnosis to 614 cells/mm3 at one year of treatment. At three years post-initiation of treatment, the patient’s virus remains suppressed with a CD4 count of 865 cells/mm3 (Table 1).

To our knowledge, this case representsthe first confirmed report of the transmission of HIV-1 containing variants exhibiting resistance to five antiretroviral drug classes,as well as the third confirmed report of transmitted INSTI resistant HIV-1.The selection of tenofovir/emtricitabinein the treatment regimen was based upon an assumption that anM184V variant might have been present below the limit of detection for population sequencing. Often, lamivudine or emtricitabineis incorporated intoARV treatment regimens toexploit the impaired replication of M184Vvariants, despitelimited evidence to support this approach. Detectable reductions in phenotypic susceptibility due to M184V variantsrequire a viral subpopulation approximating 40% of the total viral population[12]. Here, the absence of an M184V-containing subpopulation below the limit of detection of genotypic assays was confirmed by deep sequencing.Thus, the observed reduction in phenotypic susceptibility to emtricitabine and lamivudine waslikely due to the combination of L74V and V118I substitutions along with the thymidine analog substitutions M41L and D67N.

Envelope substitutions associated with ENFresistance include Q40H and the N43D.Clonal analysis of this case virus led to the identification of two novel substitutions Q40Rand N43S that were demonstrated to confer high level phenotypic resistance to ENF.

‡ Fold change is defined as the ratio of the measured IC50 for the patient-derived virus to that of the NL4-3reference virus. 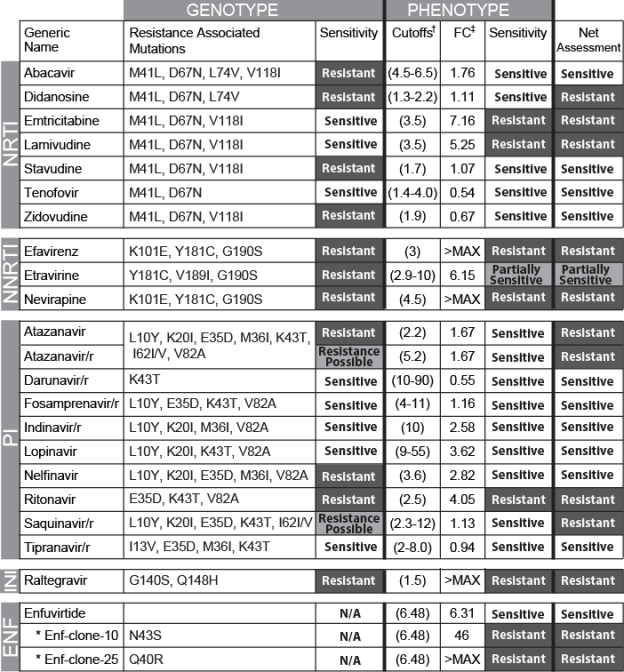