Consent: The patient consented for the use of the details of the illness in this report.

Mr DW is a 50yr old male who was admitted to hospital on the 12th of February after suffering from nausea, vomiting and diarrhoea the previous day. He reported vomiting about 3-4 times during the day but only very small amounts of vomitus as he felt too unwell to eat anything but very small amounts of food. This was on a background of a 5-month history of multiple myeloma (MM), as well as chemotherapy induced pancytopenia. He received a Melphalan peripheral blood stem cell transplant on the 8th of February 4 days prior to his current admission

His symptoms were managed by medication, but on the 15th of February he had a spike in temperature overnight. His mucous membranes became mildly erythematous on the 14th of February. He has experienced no other symptoms and overall his symptoms have gradually improved during his stay.

Relevant past medical history includes multiple myeloma which was diagnosed on the 9th of September 2016 which he has been undergoing chemotherapy for. He also received an autologous stem cell transplant on the 8th of February 2017. At the time of the diagnoses, Mr DW presented with vertebral fractures and symptomatic anaemia. Mr DW also has pancytopenia which is a consequence of his chemotherapy. Aside from hospital admissions related to the aforementioned conditions, Mr DW has never been to hospital and has no other relevant past medical history.

The patient had no family history of any conditions

Mr DW is currently employed as a cinematographer and regularly has to travel around and to different states due to his line of work. He is a non-smoker, drinks approximately 1 or 2 standards in a fortnight and denies recreational drug use. He lives with his wife and 2 of his 5 children at his house and describes himself as feeling very well supported by his family. The diagnosis of multiple myeloma was a big shock for him and his family and he is quite concerned about his current prognosis. He stated that he has accepted it and is trying to stay positive and to continue living life as normally as possible.

On general inspection there was no visible bruising, scars, masses or other abnormalities except for some slight erythema around a PICC line on his right arm. His hands had no nicotine stains, nail changes or palmar erythema but there was palmar crease pallor. There was good dentition, mucous membranes were moist.

Pulse was palpable bilaterally and of normal rate and rhythm.
Carotid pulse was strong in character.
JVP was not elevated.
Heart sounds dual no murmur.
No audible bruits nor palpable thrills or heaves.
No signs of peripheral oedema.

Trachea was midline.
Chest expansion symmetrical and not reduced.
Clear lung sounds throughout as well as normal percussion and vocal resonance.
No signs of peripheral or central cyanosis.

Abdomen was soft and non-tender.
Spleen and kidneys not palpable.
Liver of normal span (10cm)
Bowel sounds were present.

Based on his initial presentation and considering his recent stem cell transplant his treating team suspected his symptoms were likely to be due to side effects of his treatment as opposed to infection. Following the spike in temperature he was considered to have febrile neutropenia and was treated according to the guidelines (with a slight modification that shall be discussed later in report) and based on his symptoms as well as the mildly erythematous mouth Mr DW was considered to have mucositis. He is currently being managed with anti-emetics as well as prophylactic treatment considering his vulnerable state. They are also awaiting the results of blood cultures to ensure that he does not have any severe opportunistic infections.

Pancytopenia is an important entity encountered in regular clinical practice. It is not a disease but is instead a finding and can have multiple causes most of which primarily involve the bone marrow. Pancytopenia consists of a low haemoglobin count, low white cell count, and platelet count (Gayathri & Rao, 2011). In Mr DW’s case, his pancytopenia was caused by bone marrow suppression due to his chemotherapy treatment.

Currently the physiology of platelet production from megakaryocytes (MKs) are not perfectly understood. MKs are a type of nucleated bone marrow cells that studies have shown develop into polypoid structure via a process that is known as endomiosis followed by a maturation process before producing platelets in circulation (Machlus & Italiano, 2013). 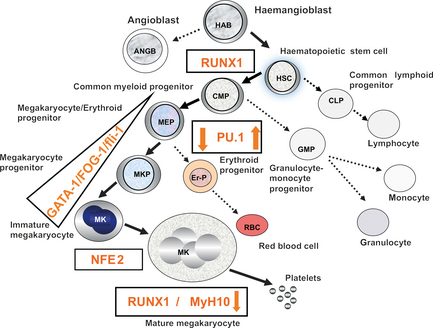 MKs are derived from haematopoietic stem cells (HSCs) which are the precursors to all other blood cells (see Figure 1) and they themselves are derived from haemangioblasts. HSCs progress into becoming common myeloid progenitor cells (CMPs) that mature into either monocytes or granulocytes, or they can continue developing into MK-erythroid progenitor cells (MEPs) which go on to produce MKs (Deutsch & Tomer, 2013). 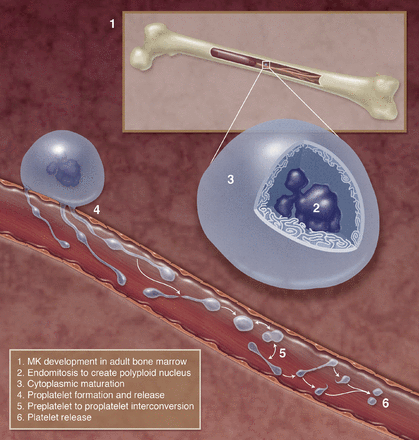 In the first phase of maturation MKs undergo nuclear proliferation and enlargement of their cytoplasm which is filled with platelet-specific granules as well as sufficient membrane to complete the platelet production process. The second phase involves MKs remodelling their cytoplasm into proplatelets and then into preplatelets which go on to release platelets through fission events (see Figure 2) (Machlus & Italiano, 2013).

There are a number of growth factors and interleukins that regulate the development of MKs but the primary and most potent one is thrombopoietin (a glycoprotein produced in the liver). It is crucial in the development and proliferations of HSCs as it stimulates the MKs to undergo hyperplasia and hypertrophy as well as stimulating the formation of the platelet projections from which release platelets into the circulation (Deutsch & Tomer, 2013).

Erythrocytes are vital to the functioning of the human body as they transport oxygen to the tissues. As such the complex developmental process known as erythropoiesis has to be carefully regulated and managed (Luo et al., 2017). The process mainly occurs within bone marrow and begins with the differentiation of HSCs into burst-forming-unit erythroid (BFU-E) cells which are the earliest erythroid progenitors (see Figure 3). These cells then go onto become the colony-forming-unit erythroid (CFU-E) cells which undergo further differentiation and maturation to become mature erythrocytes (Luo et al., 2017). 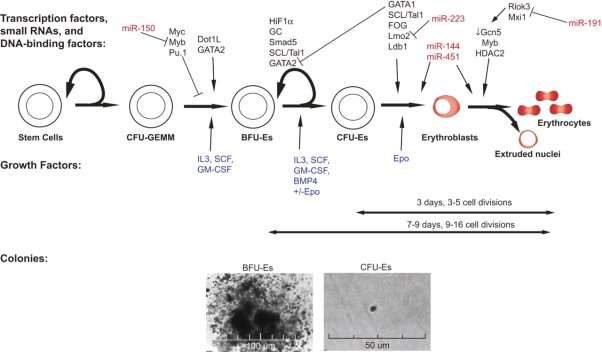 Erythropoietin is produced in the kidneys and acts as one of the most important physiological regulators of erythropoiesis. It is produced primarily in response to hypoxic conditions detected by specialised interstitial cells in the outer medulla and inner cortex of the kidneys. Erythropoietin regulates erythrocyte production, prevents apoptosis and controls the rate of release. It also acts on CFU-Es (see Figure 3) which then go on to become proerythroblasts (Hattangadi et al., 2011). These cells undergo maturation to eventually become polychromatic, basophilic, and orthochromatic erythroblasts. The orthochromatic erythroblasts differentiate to reticulocytes and become mature erythrocytes (Luo et al., 2017).

Mr DW’s pancytopenia is consistent with myelosuppression and is a common side effect of chemotherapy treatment. Normally HSCs from which blood cells develop are capable of self-renewal but chemotherapy affects cells within the bone marrow and greater numbers of HSCs are needed to be activated. Unfortunately, with the diminished capability production of the myeloid cell lines is unable to keep up and leads to low counts which is reflected in Mr DW’s blood tests (see investigations) as he has low amounts of white cells, red cells and platelets. Unlike other conditions where there may be infiltration of bone marrow he still makes normal cells but just in a diminished amount, consequently, he has normal mean cell volume, mean platelet volume and mean corpuscular haemoglobin.

Fever in neutropenic patients occurs frequently early in a course of chemotherapy and in diseases which disrupt the bone marrow. In these cases fever could be considered a medical emergency as it requires immediate evaluation as well as the use empiric broad-spectrum antibiotics (Lyman & Rolston, 2010). Patients with febrile neutropenia have mortality rates ranging from 5% – 20% and mortality rates can be greater than 50% in patients who develop septic shock or pneumonia even with the use of antibiotic treatment (Kuderer, Dale, Crawford, Cosler, & Lyman, 2006). The importance of managing febrile neutropenia swiftly and as effectively as possible cannot be understated and as such the guidelines around this area are extremely important. 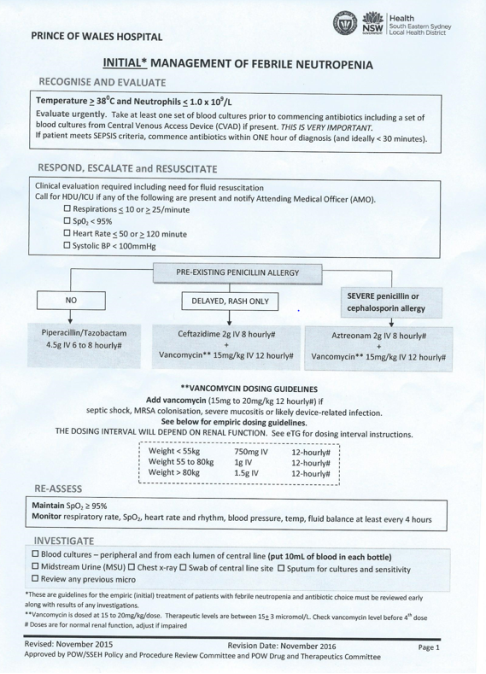 The Prince of Wales hospital where Mr DW presented has a specific guideline for initial management of febrile neutropenia. Since he has a severe penicillin allergy he was treated following the guidelines with Aztreonam but his treating team chose to differ from the guidelines and gave him Vancomycin immediately. Mr DW did not have any of the indicators for the use of vancomycin (see Figure 4) but during a discussion with the treating team it became apparent that they believed it was safer and resulted in overall better outcomes to begin patients on vancomycin immediately. As such they believed that vancomycin should be used immediately in cases with any penicillin allergy and used following the dosing guidelines when there’s no penicillin allergy.

3.2.2 Use of Empiric Antimicrobial Therapy

In terms of the use of empiric antimicrobial therapy in the initial management of febrile neutropenia the Prince of Wales guidelines essentially perfectly follow the national recommendations. The changes that Mr DW’s treating team wished to make to the guidelines is at odds with the current literature and guidelines (Freifeld et al., 2011; Paul, Dickstein, Borok, Vidal, & Leibovici, 2014). Based on most studies into this topic, non-selective use of vancomycin reduced relative risk of mortality but was not found to be significant and there also was no significant difference in overall 30-day patient mortality (Lugtenberg, Burgers, & Westert, 2009; Paul et al., 2014).

The Prince of Wales guidelines closely adhere to the national guidelines and what the current literature deems as the most effective (Freifeld et al., 2011; Paul et al., 2014). Even so, it’s clear that the treating team for Mr DW felt that the current guidelines were inaccurate. It is difficult to assess which version is more effective specifically for the population they are dealing with at the Prince of Wales hospital but based on current research following the current guidelines (as opposed to modifying them) appears to be the best course of action (Lugtenberg et al., 2009). That being said, in specific cases where the specialists in this area strongly feel that they should act differently it may be best to defer to their experience and expertise.

This assignment has been an interesting and thought-provoking experience. The most surprising thing I found was how the views of the treating team differed from the guidelines. I realised I place a lot of value upon their views and thus was very surprised when looking at the literature as it seemed to be contradict what they told me. It’s clear that I was biased at the beginning but even after researching this topic I’m still unsure if there is a correct view or side. Although, what this whole process has taught me is that more research, consultation, and evaluation in regards to current treatment guidelines and policies still can and should be done.

This time around when doing the assignment again I tried to ensure that I took the advice and feedback on my previous assignment seriously. Finding a patient was difficult and I ended up with a patient that had similar aspects to a previous assignment but I tried to explore different aspects and it also allowed me to incorporate things that I did not include previously. There have been issues and difficulties with writing this assignment but I feel that overall, it’s been quite rewarding and that I hope to maintain a higher level of quality in my work going into the future.