The purpose of this experiment was to better understand how an ecosystem changes over time by simulating the interaction between the aquatic, terrestrial and decaying parts of an ecosystem. Several variables of an aquatic chamber, terrestrial chamber, and decaying chamber were monitored to provide evidence for the changing of the ecosystems. Dissolved oxygen, pH, temperature, and turbidity, were some of the things measured and used as evidence to prove that the ecosystem was undergoing change. Obvious aesthetic changes were also noticeable, these were observed and recorded as changes within the environment. Without a complete and complex food chain, and with the small size of the ecosystem, it was not likely that the ecosystem would remain stable for a extended period of time. The lack of a food chain will not allow for larger organisms such as the fish and beetle to remain alive for a long time. The chambers should undergo similar changes that a normal ecosystem would.

The setup for the experiment was begun on September 9, 2013. Two liter soda bottles were used as the chambers for each environment type. The bottles were cleaned, cut to appropriate size, and taped together. Openings were cut into both the terrestrial and aquatic environment to allow access for testing. The top chamber was the decomposition environment. Two rotting banana peels, decaying leaves, and… were added to the decomposition column, the top column. Rocks, soil, grass, moss, sticks, three earthworms, and one beetle were inserted into the middle, terrestrial chamber. A long stick was inserted through the decomposition chamber, into the terrestrial chamber to connect the two chambers. The bottom aquatic chamber was filled with local lake water and some aquatic plants. At the beginning of November the dissolved oxygen levels in the water were high and had stabilized, so a fish was added to the chamber. Upon each sampling event several variables were measured in the aquatic and terrestrial chambers. In the aquatic chamber turbidity, color, Nitrate, Dissolved Oxygen, alkalinity, pH, and temperature were measured and recorded. In the terrestrial chamber Nitrogen, Phosphorous, Potassium, and pH levels were measured and recorded. Also during each sampling event visual observations were made and recorded for both chambers. The sampling events were biweekly for most of the experiment. Throughout the experiment there were six sampling events; these were on September 9, October 1, October 8, October 22, November 5, and December 3. The experiment lasted a total of 75 days, with the last sampling event on December 3, 2013.

The ecosystem appeared to be stable until around the third sampling event. The ecosystem was growing and stabilizing. In the aquatic chamber dissolved oxygen was slowly increasing as well as alkalinity. In the terrestrial chamber potassium increased from an adequate level to a sufficient one. On October 22 the nitrogen, potassium, and phosphorous levels in the soil declined significantly from the last sampling event. There were also small fluctuations visible in the aquatic variables we tested. The dramatic depletion of almost all variables observed on the November 5th sampling event was foreshadowed by the turning of the water from clear to yellow. This showed the first signs of changes within the environment. On the November 5th sampling event the water in the aquatic chamber was green, the dissolved oxygen and alkalinity levels dropped considerably. Nitrogen, potassium, and phosphorous levels were all depleted in the soil. 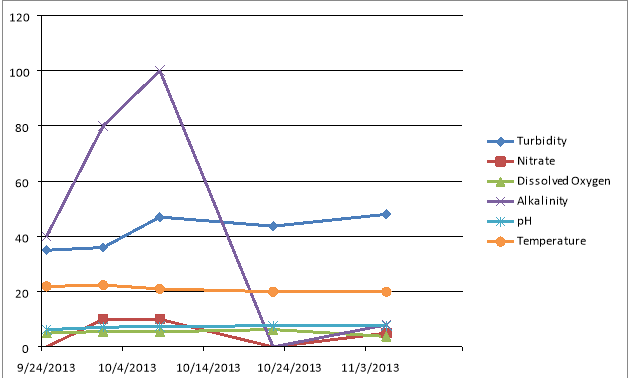 With the exception of alkalinity most of the aquatic variables that were measured and recorded stay remotely constant. Turbidity did increase steadily toward the end of the experiment and the dissolved oxygen levels decreased. This was shown by the green water color that was observed.

ANSWER THE FOLLOWING QUESTIONS. NUMBER EACH QUESTION. YOU DO NOT HAVE TO RETYPE THE QUESTIONS!!

The ecosystem is closed with the exception of when things were added such as the fish or “rain water.” There are no outside forces working on the ecosystem, such as wind.

One group whose ecocolumn water turned completely black in the first few weeks of testing experienced succession. Eventually the water cleared and the oxygen levels rose.

Eutrophication is the excessive increase in nutrients that causes an overgrowth in aquatic plant life, the plants become so dense it causes death in organisms and a loss of oxygen. If a large amount of nutrients drains from the soil of the terrestrial chamber into the aquatic chamber, then eutrophication may occur.

The group in front of us has several sources of error such as bad lake water, and lack of precision during sampling events.

Write a brief summary paragraph as your “conclusion”. Address what did you learned that you did not know prior to the experiment? What were the most important findings of the project and why?

The ecocolumn remained fairly stable and function for the first few weeks of the experiment. Not until three weeks before the experiment was concluded were fluctuations in the tested variables observable. Eventually due largely to the small size of the ecosystem and the incomplete food chain within it, the ecosystem broke down and the levels of nutrients began to greatly decline, as well as the dissolved oxygen levels within the aquatic chamber. Prior to this experiment I had never seen eutrophication in person. The opportunity to observe and further study eutrophication will help me later. The most important finding of this experiment was that different parts of an ecosystem (aquatic, terrestrial, decomposing) are all linked together. The variables in each part can easily influence variables in another part.

References (on a separate page)

You must use at least three (3) sources in your report. Cite them using the correct parenthetical or footnote format as indicated by the APA style guide that was handed out in class. If you do not know how to format the parenthetical citations or the bibliography, please see Mrs. Houston for help before the paper is due!