This report was aimed at providing an insight into the environmental geochemistry of copper (Cu). It gave a brief overview of the occurrence of copper and areas in which it is located globally. It went on to discuss its various physical and chemical properties, after which it evaluated the extraction and processing techniques which are used to recover Cu. The diverse uses of Cu in various industries were also looked at, and then the wastes generated during the Cu processing were discussed. The vast routes of Cu pollution in the environment were also analysed, and the toxicity of Cu in humans, animals, aquatic species and micro-organisms were appraised. Lastly, the standards put together to curb Cu exposure and toxicity were equally identified.

The quantity of copper beneath the Earth’s surface is approximately 50 parts per million (ppm) and it occurs as large star-like structures (Emsley, 2011). It takes different natural forms in the likes of cuprite which is a copper(I)oxide mineral, malachite and azurite which are copper carbonates, as well as chalcocite and chalcopyrite which are copper sulphides (McLemore & Mullen, 2004). These various copper-bearing minerals and their distinctive copper percentages are shown in Figure 1. It is argued that the distribution of Cu and Zinc (Zn) are quite similar to that of Pb (Lead) (Franklin, Gibson, Jonasson, & Galley, 2005), however, further studies show that this is majorly predominant in roadside soils (Bakirdere & Yaman, 2008). In the current advancing world, recycling has proven to be a reliable alternate source of copper (Gomez, Guzman, & Tilton, 2007). Another key source of copper is skarns, which form by hydrothermal fluid reactions in high temperature igneous environments, usually above 2500C (Hammarstrom, 2002). 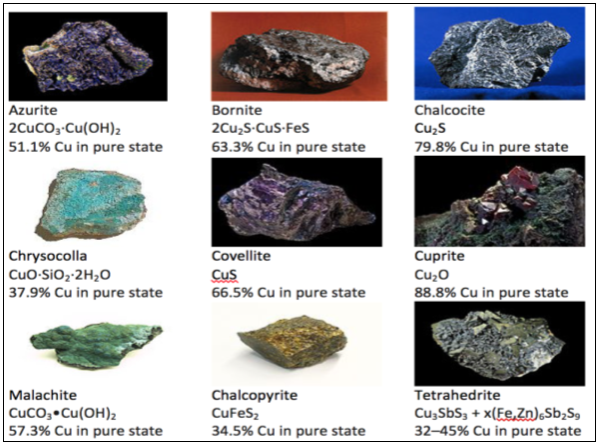 Copper is normally extracted or mined in the form of copper sulphides in 0.4 -1.0% Cu-containing porphyry copper deposits from massive open pit mines (Melchiorre & Enders, 2003), as shown in Appendix A-1. Various mining sites of copper around the world include the USA which has the El Chino Mine in New Mexico and the Bingham Canyon Mine in Utah, as well as Chuquicamata in Chile (Crowson, 2012). In 2005, the British Geological Survey highlighted that Chile produced about one-third of the world’s copper, making them the top copper producer globally in front of USA, Indonesia and Peru respectively (Nishiyama, 2005) as seen in Appendix A-2. An in-situ heap leaching process is one feasible technique for copper recovery, as most sites in Arizona have implemented this technique with recorded successes (Dreisinger, 2006). Since the inception of copper extraction for thousands of years, the last two decades have accounted for more than half of copper extraction (Martinez-Alier, 2001). It is proposed that over 1014 tons of copper exists in the Earth crust’s top kilometre which could last up to 5 million years based on current extraction rates. Nonetheless, the extraction of these vast reserves of copper is limited by current technologies and prices, making only a little portion of it to be economically feasible to exploit (Camus & Dilles, 2001).

It is typical for the ore in mining operations to be concentrated, thereby making the processing methods to be dependent on the nature of the ore (Sadowski, Jazdzyk, & Karas, 2003). Ores like chalcopyrite which are sulphide copper minerals are usually crushed and ground to release the important minerals from the waste, and then beneficiated using mineral flotation (Peng, Grano, Fornasiero, & Ralston, 2003). The next process involves smelting the sulphide concentrates in furnaces to yield matte, which is then converted and refined to give anode copper before the last stage of electrolysis comes in (Biswas & Davenport, 2013). Due to environmental and economic factors, there is always a reclamation of the by-products during the processing of copper, just like the turning of sulphur dioxide into sulphuric acid (Agrawal, Sahu, & Pandey, 2004). Any copper ores which are oxidised during the refining process are treated through hydrometallurgical extraction (Biswas et al, 2013). A flowchart of the extraction, processing and manufacturing is shown in Figure 2. 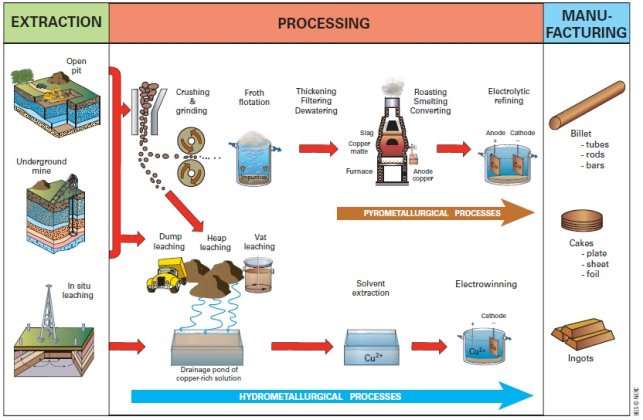 Copper is the 29th element on the periodic table in Group 11 with symbol Cu, and it is a ductile, malleable and soft metal that possesses high electrical (59.6×106 S/m) and thermal conductivity (401 W/(m.K) (BGS, 2007). Native copper usually has a reddish-orange colour when exposed to air as shown in Figure 3. It has a face-centred cubic crystalline structure, with density of 8.96 g/cm3 at room temperature (Núñez Aguilar, 2013). This solid element has a boiling point of 2567 0C and melting point of 1083 0C (BGS, 2007). Copper reacts with oxygen when exposed to air to form a protective layer of copper-oxide, which prevents the metal from corrosion, unlike in iron (Fe) (Balamurugan & Mehta, 2001). Various alloys of copper exist including brass (copper and zinc) and bronze (copper and tin), amongst many others (BGS, 2007). 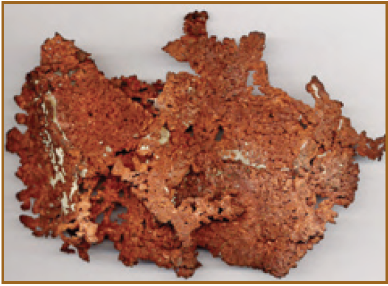 60% of copper is used for electrical wires and cables, 20% for plumbing and roofing, 15% for industrial equipment and 5% for use as alloys of bronze and brass (Ayres, Ayres, & Råde, 2003) as seen in Figure 4 and Appendix A-3. It is also used as an antibiofouling agent to regulate plant and shellfish growth, and also has antimicrobial function as fungicides and nutritional supplements in the agricultural sector (Pelletier, Bonnet, & Lemarchand, 2009). Its use also cuts across folk medicine for bracelets that relieve arthritis, as well as its use for compression clothing suggested to treat certain ailments (Richmond, 2008). It also serves as a wood preservative, musical instruments, especially the brass instruments like gongs and string instruments like guitars and pianos (Sachs, 2012). Its use is also predominant in the beverage industry for distilling spirits like whisky (Lu & Gibb, 2008).

Copper could be recycled from its raw state and also from produced materials, and it ranks as the third most recycled metal behind iron and aluminium as seen in Figure 5 (Agrawal et al., 2004). About 80% of all globally extracted copper is still in use currently, probably because the recycling process is similar to the extraction process, only with the exception of few steps (Biswas et al, 2013). Scrap copper of high purity is melted in a furnace, and afterwards reduced and cast into ingots and billets; while those of lower purity are electroplated in sulphuric acid (BGS, 2007). Certain bacteria like Pseudomonas fluorescens and Chromobacterium violaceum aid in copper degradation (Faramarzi, Stagars, Pensini, Krebs, & Brandl, 2004).

Slag wastes, as shown in Figure 6 are usually the by-products after copper refining processes, and the Sarcheshmeh Copper Complex in Iran produces over 370,000 tons of slag waste annually (Khorasanipour & Esmaeilzadeh, 2016). These slag wastes are deemed to be multi-elemental contaminants with very high toxicity, and pose anthropogenic risks to the natural environments (Ashley, Lottermoser, & Chubb, 2003). However, in weathering environments, their toxicity is somewhat reduced as low soluble glass compounds, oxides and silicates encapsulate them (Khorasanipour et al, 2016). These slags act as environmental contaminants through leaching and weathering processes of potentially toxic elements (Luo, Yu, Zhu, & Li, 2012). It is suggested that 1 ton of copper could generate about 2.2 – 3 tons of slag waste, and worldwide copper slag production is about 24.6 million tons (Hammarstrom, 2002). However, smelting slag wastes serve as useful additives for abrasive, construction and building materials (BGS, 2007). 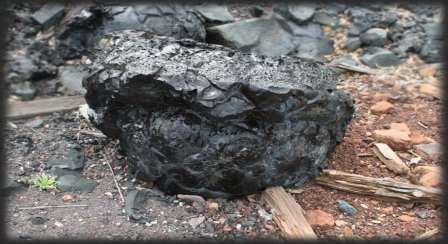 Due to continuous increase in global copper production, more copper ends up in the environment as shown in Figure 7 (BGS, 2007). Wastewater that have copper have been deposited at the river banks while the air has also been polluted with copper through combusting fossil fuels (Luo et al., 2012). These copper held up in the air then fall back as rain, alongside dumped slag waste which then contaminate the soil (Wong, Li, & Thornton, 2006). Some natural routes of copper pollution are sea spray, forest fires, decaying vegetation and wind-blown dust (Ashley et al., 2003). Human contributions include mining, as well as phosphate fertilizer, metal and wood production (Raufflet, Barin Cruz, & Bres, 2014). 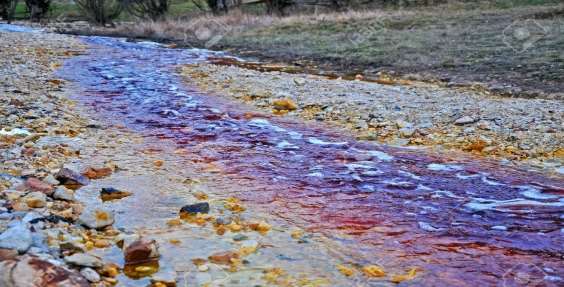 Copper levels above 2.0 mg/l in drinking water is suggested to be lethal to humans as highlighted in Figure 8, however, this also depends on the source of contamination (Zietz et al., 2003). It could cause eye irritation, lung disease, dermatitis, upper respiratory tract infection, acute renal failure, liver damage and death in humans (Blanusa, et al, 2005). The oligodynamic effect poses toxicity to bacteria in even little levels of copper (Shrestha, et al, 2009). For aquatic species, it affects their nervous system, kidney, liver and gills, as well as their sense of smell which hinders their usual mating process (Kiaune & Singhasemanon, 2011). 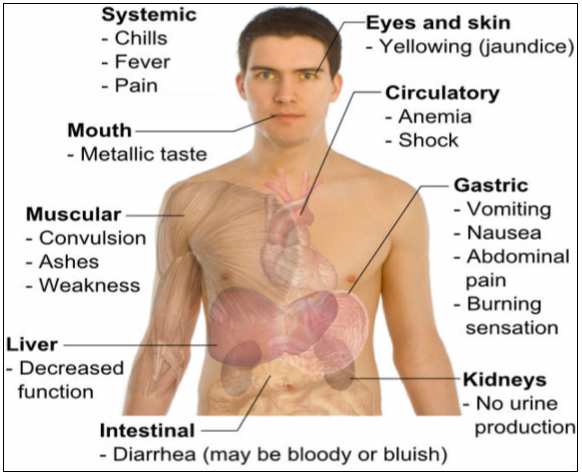 There are several standards and specifications that are necessary for proper handling and exposure to copper (BGS, 2007). Amongst these are the Unified Numbering System (UNS), as well as ASTM Standard Designation for Wrought and Cast Copper and Copper Alloys (CDA, 2016). The permissible exposure limit (PEL) of 1 mg/m3 time-weighted average (TWA) for copper dusts is being set by the Occupational Safety and Health Administration (OSHA), which also tallies with the recommended exposure limit set by National Institute for Occupational Safety and Health (NIOSH) (OSHA, 2016). However, the level that is immediately dangerous to life and health (IDLH) is 100 mg/m3 TWA (Fthenakis, 2003). For copper fumes, the OSHA and NIOSH exposure limits are set at 0.1 mg/m3 TWA (Coble, Lees, & Matanoski, 2001), however, the American Conference of Governmental Industrial Hygienists (ACGIH) sets their threshold limits at 0.2 mg/m3 TWA (Cohen & Powers, 2000).

Copper is normally a reddish-orange polycrystalline, ductile, malleable and soft metal with high electrical and thermal conductivity (Ayres et al., 2003). It could be extracted from various minerals, as well as skarn deposits, landfills, waste dumps and open pit mines (Emsley, 2011). The use of copper also spans across the electrical, architectural, plumbing, industrial, jewelry, agro-allied, microbiological, music and beverage industries (CDA, 2016). The major method through which copper could be discarded is deemed to be recycling, although certain bacteria aid in its mobilization (Agrawal et al., 2004). The processing of copper also involves several stages that cut across crushing, grinding, mineral flotation, smelting, conversion, refining and finally electrolysis (Peng et al., 2003). At the end of these processes, slag wastes are generated and have the potential to cause damage to the environment (Khorasanipour et al, 2016). It has also been found to be very toxic in humans and animals, causing damage to the liver, skin, lungs and kidney (Zietz et al., 2003). To this effect, OSHA and NIOSH are two of many other organizations that have set certain standards and exposure limits to curb its toxic effects (OSHA, 2016).

After gaining an understanding of the environmental geochemistry of copper, it can be seen that its exploitation and mining remain very vital for daily activities in various sectors. However, the standards that have been set by OSHA and NIOSH should be taken into consideration to mitigate any environmental and health impacts that may be associated with its exposure. Furthermore, regions with very high copper reserves like Chile should also ensure that mine sites are effectively protected from having direct contact with the environment.

123RF. (2016). Contaminated mine water pollution of a copper mine exploitation. Retrieved from https://www.123rf.com/photo_24914808_contaminated-mine-water-pollution-of-a-copper-mine-exploitation.html

APPENDIX A-1. Types of Copper Deposits 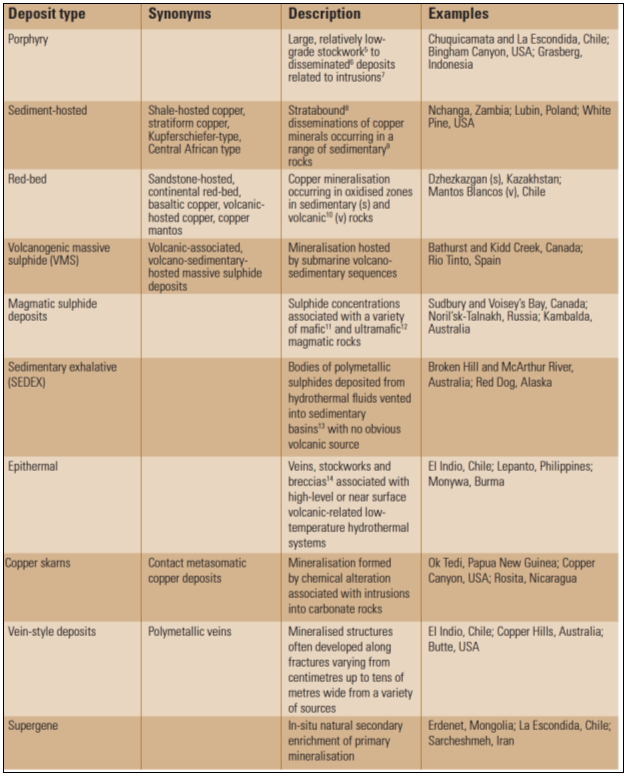 APPENDIX A-2. TOP COPPER PRODUCING COUNTRIES IN THE WORLD 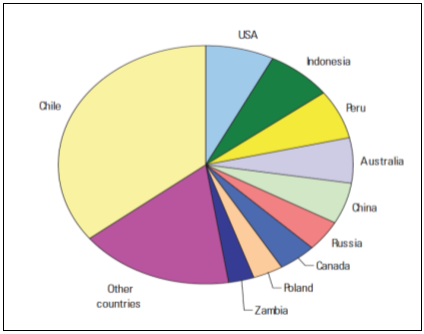 APPENDIX A-3. APPLICATION OF COPPER IN VARIOUS INDUSTRIAL SECTORS 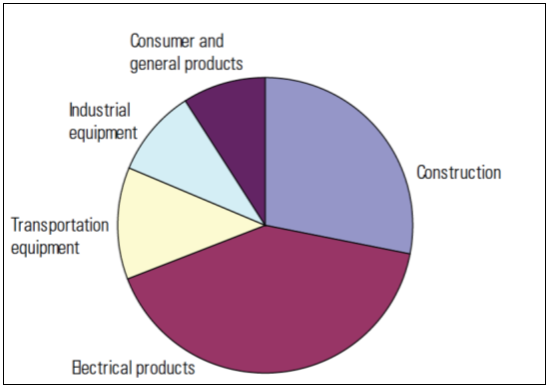