Electrical Energy Storage technology is proficient in coping with key characteristics of electricity. One trait is its ability to hourly vary in demand and price. Soon electrical energy storage will become essential in bringing relevant markets together to use more renewable energy, to accomplish low CO2 levels for Smart Grids

Electrical Energy Storage has three main objectives. These are: –

In general, the definition of Smart Grid is to modernise the electricity grid. It involves all aspects related to the electrical system between any point, from generation to consumption. Now that Smart grid technology has been implemented the grid has become more flexible and interactive and gives immediate feedback. The Smart Grid will provide information concerning the price of electricity and the state the power system can be exchanged between electricity production and consumption to realise a more efficient and reliable power supply

Electrical Energy storage is significant in the development of Smart Grid.

Types of Energy Storage and Features

Pumped hydro storage technology uses to reservoirs at different altitudes. At off peak times water from the bottom reservoir is pumped to the top reservoir. This is can be referred to as charging. Once electrical energy is need water from the top reservoir flows back down to the bottom reservoir, which in turn powers turbines positioned between the top and bottom reservoir. The turbines are connected to generators to then produce electricity. This is known as discharging. Pumped hydro relies on environmental locations. For high and low reservoirs dams, flooded mine shafts, other underground cavities and the open sea are suitable locations to construct a pumped hydro energy system plant. Currently in the UK there is one pumped hydro station located in Dinorwg in North Wales. This is the power station depicted in figure two below.

Discharge time periods can last up to several hours to a few days. This depends on the size of the plant. They are seventy to eighty-five per cent efficient.

Some advantages of pumped hydro technology is the long lifetime and practicability unlimited cycle stability of the installation. Disadvantages are its dependency on topographical conditions and large land area used. 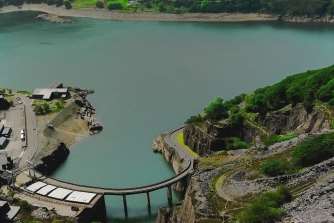 Compressed air technology is used as a storage means due to its obtainability. Air is compressed and kept in underground structures or above ground systems of vessels or pipes. Natural gas is then mixed with the compressed air and burned, which is expanded in specialised gas turbines. Usual underground storage system locations are caverns, aquifers or abandoned mines. This process is illustrated in figure three below. Heat cannot be released during compression dissipation as it will cool while in storage. The air needs to be reheated before expansion in the turbine. This is called Diabatic Compressed Air Energy Storage. This method gives low round trip efficiencies of less than fifty per cent. This system is well established with plants having high reliability and are proficient at starting without extraneous power.

The main advantages of compressed air energy storage are its large capacity. The disadvantages the technology develops is low round trip efficiency and location restriction. 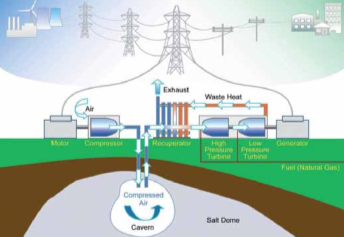 Flywheel energy storage generates energy using a rotating cylinder and stores its energy in an accelerated rotor. The flywheel is made up of a rotating body/cylinder within a compartment. There are also bearing and a transmission device. The electrical energy is generated by the flywheel by keeping the rotation of the body at a constant speed. The higher the speed the more energy stored. To function the flywheel is electrically supplied by a transmission device. If the speed reduces then electricity my by gathered from the system by the transmission device.Â  The rotor of the flywheel is made out of high strength carbon filaments. These are suspended by magnetic bearings. The rotor can reach speeds of twenty thousand to over fifty thousand revs per minute in a vacuum enclosure.

The advantages of using flywheels enables a long-life span, little maintenance, high power density uses environmentally inert material and has excellent cycle stability. The disadvantages to flywheels have high levels of discharge to the resistance in the air and bearing losses. They also suffer from low current efficiency. 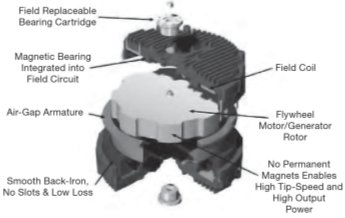