Cleaning products are an essential part of maintaining any home or workplace. However, many of the well-known household cleaners contain chemicals that can harm the environment. This is a main reason as to why a consumer’s choice upon choosing a cleaning product should rely on the safety of not only humans but the environment as well. For example, cleaning products that contain Volatile organic compounds can affect indoor air quality as well as contribute to the formation of smog in outdoor air (EPA, 2010). Therefore, an experiment has been conducted to accurately determine which cleaner-vinegar, Comet, All Purpose, baking soda, or a mixture of vinegar and baking soda- is the most environmentally safe and the most efficient. The end result should display the mix of Vinegar and Baking Soda as being the most environmentally safe and efficient household cleaning product.

To begin the experiment, draw two lines on each tile (five tiles total) 10 centimeters long. Label each line as either a 1 or 2 on each tile to distinguish the trials. (Note: each line will be used for separate trials.) Also, label each tile as the name of the cleaner being used. Then, measure 10 milliliters of vinegar using a graduated cylinder. Depending on paper towels available, fold as needed to where it does not rip or bleed through while scrubbing. Next, pour the vinegar from the graduated cylinder slowly onto the line marked as trial 1. Scrub the stain that has vinegar on it vigorously using the paper towels. Same person scrubbing the vinegar will do so for the rest of the products and trials. Start the stopwatch once the scrubbing begins and stop as soon as the mark is completely removed. Record results immediately after the stain is erased and clearly state any observations obtained. Repeat this procedure for both Comet and All Purpose cleaners. However, a different method must be taken when removing the stain with a baking soda and water solution. In a plastic cup mix two scoops of baking soda with 30 milliliters of water. Measure 10 milliliters of that solution into a graduated cylinder. Pour the solution onto the tile labeled trial 1. Scrub vigorously using paper towels as needed. Record observations and the amount of time it takes to remove crayon stain. Repeat the procedure with baking soda and water except replace the water with vinegar. It will now be a baking soda and vinegar solution. Finally, record observations and time taken to remove the crayon mark. Repeat all procedures for each solution an additional time but instead using the mark labeled as trial 2. Make sure to record all data and observations after each crayon mark is thoroughly removed from the tile. 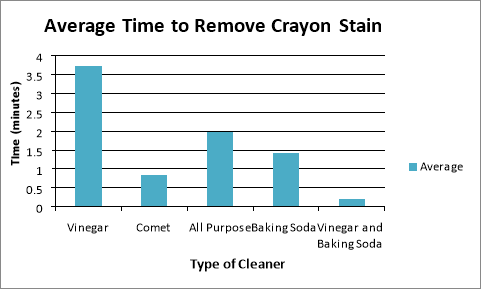 Observations were made immediately following each trial. For instance, vinegar was clear and watery. It had a sour scent and was not messy. Unlike vinegar, baking soda was messy, milky, and gritty. Comet was a thick, green, slimy, and bleach-smelling product. Like baking soda, Comet was also messy. All Purpose, however, was not messy and had a bleach stench. It was also watery and made bubbles once the scrubbing began. Vinegar and baking soda mixture was milky, gritty, and made a reaction when mixed together.

In conclusion, this experiment was successful in displaying which cleaning product was the most efficient, while being environmentally safe. In this experiment there were four specific cleaning products that were experimented. The hypothesis is supported by the data that was obtained; the combination of vinegar and baking soda is the most efficient in removing a crayon stain. Moreover, as well as being the most efficient, vinegar and baking soda is the most environmentally safe. The data that was concluded from each product are as follows. The first cleaning product tested was vinegar and was found to be inefficient time wise, taking over 3 minutes to remove the stain. Vinegar has an ingredient of acetic acid. If acetic acid is released into the environment it will either evaporate or natural waters will neutralize the solution into acetate salts, either of which are not harmful (Iowa State University, 2001). The next product tested was Comet. It was found to be inefficient, but on average was the second to fastest in removing the stain, taking only over a minute compared to vinegar’s 3 minutes. Comet contains fragrance, surfactant, sodium hydroxide, sodium hypochlorite, water, and cleaning agent. Of the ingredients, sodium hypochlorite was found to be the most harmful because it is a toxic chemical. Although sodium hypochlorite is only entered in the environment by a spill or misuse, overexposure can result in harm to aquatic wildlife such as freshwater fish (SDA, 1997). Another product tested was Great Value All Purpose Cleaner. All Purpose took almost as much time as Vinegar to remove the stain, making it inefficient as well. Like Comet, All Purpose contained 2% sodium hypochlorite; therefore, they have similar effects on the environment, both of which are harmful to aquatic wildlife if overexposed. An additional product tested was baking soda. The data for baking soda in the first trial of the experiment can be classified as inconclusive as a result of the baking soda sinking to the bottom of the cup when mixed with water. However, when conducting the second trial the time made an enormous decrease, taking a little over 30 seconds to remove the crayon mark. Baking soda is made up of sodium bicarbonate. Sodium bicarbonate occurs in nature. Therefore, further studies indicate that under normal conditions and use of sodium bicarbonate there are no harmful effects pertaining to plant life and the environment. In fact, research studies show that sodium bicarbonate improves sewage treatment by effectively using pH and enhancing anaerobic digestion of solids (Arm and Hammer, 2012). The final cleaning product tested was a mixture of vinegar and baking soda. This mixture was concluded to be the most efficient in time, taking less than 20 seconds to remove the crayon mark in both trials 1 and 2. Due to this mixture of acetic vinegar and basic baking soda, the resulting solution is a neutral substance- carbon dioxide- that is not harmful to the environment. Ultimately, as previously stated, the hypothesis was supported by this experiment; vinegar and baking soda mixed is the most effective and environmentally safe product. The cost of both vinegar and baking soda is not the cheapest, being a little over 3 dollars, but the effectiveness and safety override that factor. An error recorded for this experiment is that the lines drawn onto the tiles were too thick, making it harder to scrub off with the cleaning product which may have altered the overall data for that trial. Furthermore, the tiles itself had different textures which could have had an overall effect on the amount of time taken to remove the crayon stain.

The Soap and Detergent Association. (1997). Sodium Hypochlorite. Retrieved from http://www.aciscience.org/docs/sodium_hypochlorite.pdf