Panchagavya is an organic formulation, which is prepared out of unique combination of five products of cow viz., cow milk, curd, ghee, urine and fresh dung at appropriate quantities collected from lactating heifers. It is an organic plant liquid fertilizer. It is organic growths that act as a stimulant for all types of plants, milk producing animals such as cow and goat. Panchagavya is also a traditional method, used to safeguard plants and soil micro-organisms and to increase plant production. Panchagavya application is found to be more profitable than recommended fertilizer application and chemical spray. The modified versions used for organic farming have been standardized by experimental trials. The market demand for organic produce gave further momentum to the organic movement, and eventually sporadic attempts have been made to detoxify the land, dispense with chemical fertilizers, pesticides, fungicides and herbicides, and grow crops organically. There was no organic substitute for these chemicals, yet the cause of organic agriculture picked up momentum. The current global scenario firmly emphasizes the need to adopt eco-friendly agricultural practices for sustainable agriculture. Chemical agriculture has made an adverse impact on the health-care of not only soil but also the beneficial soil microbial communities and the plants cultivated in these soils. This eventually has lead to a high demand for organic produce by the present-day health conscious society and sporadic attempts are being made by farmers all over the world to detoxify the land by switching over to organic farming dispensing with chemical fertilizers, pesticides, fungicides and herbicides. Organic manure replaced chemical fertilizers, herbal extracts replaced pesticides and fungicides, but nothing was available to replace growth promoting hormones and immunity boosters for plants. The organic system was imperfect and continued to be incomplete for want of an input to replace growth- promoting hormones and immunity boosters, to maximize the efficiency of cultivated crops and coordinate the process leading to sustained higher productivity.

Panchagavya is a living elixir of many micro organisms, bacteria, fungi, proteins, carbohydrates, fats, amino acids, vitamins, enzymes, known and unknown growth promoting factors micronutrients trace elements antioxidant and immunity enhancing factors. When taken orally by animals and human beings, the living micro organisms in the Panchagavya stimulate the immune system and produce lot of antibodies against the ingested microorganisms. It acts like vaccine. This response of the body increases the immunity of animals and humans and thus helps to prevent illness and cures disease. It slows down the aging process and restores youthfulness. The other factors present in Panchagavya improve apetite, digestion and assimilation and elimination of toxins in the body. Constipation is totally cured. Thus the animals and humans become hale and healthy with shining hair and skin. The weight gains are impressive.

The trunk produces side shoots, which are sturdy and capable of carrying maximum fruits to maturity. Branching is comparatively high.

The rooting is profuse and dense. Further they remain fresh for a long time. The roots spread and grow into deeper layers were also observed. All such roots help maximum intake of nutrients and water.

There will be yield depression under normal circumstances, when the land is converted to organic farming from inorganic systems of culture. The key feature of Panchagavya is its efficacy to restore the yield level of all crops when the land is converted from inorganic cultural system to organic culture from the very first year. The harvest is advanced by 15 days in all the crops.It not only enhances the shelf life of vegetables, fruits and grains, but also improves the taste. By reducing or replacing costly chemical inputs, Panchagavya ensures higher profit and liberates the organic farmers from loan.

A thin oily film is formed on the leaves and stems, thus reducing the evaporation of water. The deep and extensive roots developed by the plants allow withstanding long dry periods. Both the above factors contribute to reduce the irrigation water requirement by 30% and to ensure drought hardiness.

Vermiwas is a watery extract of compost, collected after water had passed down through several layers of waste in a barrel or container and also through a column of worm action which is very useful to crop producers. Furthermore, it is actually a collection of earthworm’s mucus secreation, excretory products together with micronutrients from the soil organic molecules. Physical characteristics of vermiwash is that it will appear as clear, transparent, pale yellow fluid provided it was collected properly. Sometimes it will turn to be honey-brown colour which is also commonly used in the agriculture field. Earthworms are the main agent that helps fasten the process of decomposting and reduce the period for the vermiwash to be ready. Main reason on why earthworms are being used is due to the coelomic fluid in their body which helps keeping the body wet and are always secreted by their body. Vermiwash originally derives from the coelomic fluid which was released by the earthworm and Coelomicites, Granulocites and Limphoidocites cells were found to be present in the coelomic fluid. Advantages of having those 3 cells are that it facilitates wound healing in earthworms and provide immune power to them. They are found to be protected from diseases caused pathogen due to the failure of pathogens in surviving in that fluid. Having added earthworms in the vermiwash helps decomposing organic matter and turning nutrients into a form available to plants. Earthworms fed on decaying plant and soil where they digest it and excrete it. Liquid consisting of nutriets such as calcium, nitrogen, potassium and phosphorus are the excretion matter by the earthworms. this liquid makes up vermiwash hence helping plant to be able to absorb it. 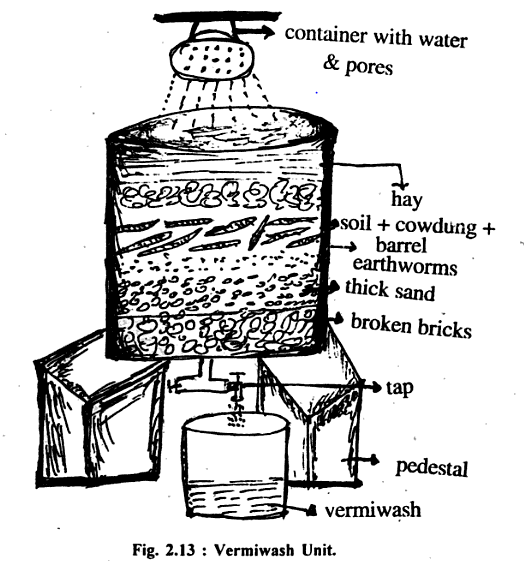 After the success production of vermiwash, the physic-chemical characteristics of the vermiwash can be measured. It is better to measure because it can determine or proves that the vermiwash that had been prepared manually have the correct range of physic-chemical characteristics. The first characteristics is the pH where it is normally around pH 6.9. the dissolved oxygen reading would be 1.14 ppm whereas its alkalinity is around 70.00 ppm. Other than that, vermiwash have 110.00 ppm levels for chloride and 177.00 ppm for sulfates content. Besides that, it had been recorded in previous study that the reading for inorganic phosphate was around 50.9 mg/l ahile its ammonical nitrogen was around 2.00 ppm. Furthermore, it had 69.00 level for potassium and 122.00 ppm for sodium content in the vermiwash.

The common practice to apply vermiwash can be either by pouring it onto the soil at the base of the plant or it can be sprayed at the leaves of the plant. It had been said that by spraying it onto the leaves, the epidermis of the leaves will be strengther or stronger thus decreasing the level of damage that had been caused by aphids and penetrating fungal spores. In large farms that had been practicing irrigation method as part of their water management for the crop, they can apply vermiwash using irrigation method for example in the drip system.

Effect Of Vermiwash On The Quality and Yield Of Crops

According to a recent findings, antibacterial properties can be found in the coelomic fluid produced by the earthworm body. previous studies had shown that the quality and quantity of yield had improved remarkablely after vermiwash was sprayed on the vegetables. Furthermore, even the foliage of the crop turned dense green in 2 to 3 days. Karuna et al. (1999) had studied on two different concentrations of vermiwash of Eudrilus eugeniae which was sprayed on anthuriums to study its effect. Findings of the study showed that the most effective percentage of vermiwash to be used was 50 percent which is good in inducing vegetative growth such as number of suckers, length, breadth of leaves, length of petiole and develop early flowering in plants. Next study done by Balam (2002) on biopesticidal properties of vermiwash produced using cowdung and vegetable wastes by inoculating earthworm species (E. foetida) in the laboratory also to determine the effect of using the vermiwash on cowpea for vmildew disease. Findings from the study showed that usage of 20 percent to 30 percent of vermiwash will cause the inhibition of mycelial growth of pathogenic test fungi. Vermicompost and vermiwash were proven to be able to control disease powdery mildew at 75.14 % rate when applied. On the other hand, another effective treatment was combining vermicompost, vermiwash and 10 % cow urine which said to be able to control disease at 73.37 % rate.

As a conclusion, there are many things found around us that can be turned into something useful for us humans. Daily, human produces many waste either at home, farm production and other activities. All those waste which were once simply being thrown away in the river, on empty land, and other places on earth that ends up polluting the environment can now be make use of. Methods had been discovered on how and what to be done with those waste that can benefits us all either by suppling nutrients to the soil or crop which is environmental friendly, made without a single harmful chemical, nutritious and more importantly, cheap to be produced compared by using the chemical fertilizer, pesticide, fungicide and others. The usage of worms which was known to be useful in the degradation of stuff helps in vermicomposting thus vermiwash. Proves can be found in journals and books done by researches that approves the usage of vermiwash which was said to be more beneficial towards producers, crops, soil and not to forget mother nature.