Effect of Various Factors on DNA of Human Sperms

Aim: Effect of various clinical compound and environmental conditions were studied for the in vitro fragmentation of the human sperm DNA, as well on the quality of semen samples. Method: The semen samples obtained from different males were then treated further to check the effects of the chemicals taken into consideration. The effects were studied through sperm chromatin dispersion test. Results: Primary results showed that the antibiotic tetracycline was the most effective chemical causing DNA damage, as compared to the other chosen compounds. Conclusion: The study concludes that the tetracycline drug is more efficient then the others in causing fragmentation of the DNA.

The germ line is the most sensitive of all and can be considered as a good candidate for the measurement of the effects caused by the compounds of choice [1-4]. Today infertility is linked to many reasons such as mutation in the sperms or the egg, irradiation, and certain chemicals such as food additives, packaging materials, heat etc. Many articles have been put forward proving the adverse effects of these chemicals on the germ line especially the sperms and its DNA. The paternal genome in mammalian spermatozoa is condensed in a manner that is specific to the cell type presumably to protect the DNA during the transit from the male to the oocyte prior to fertilization. Damaged DNA has been observed in testicular, epididymal and ejaculated sperm. Temporary nicks have been observed in the sperm which were, linked to the topoisomerases activity, facilitate histone-protamine replacement, but if these nicks are not fixed they would evolve into DNA fragmentation on mature sperm [5].

Bisphenol A (BPA) used to make plastics and epoxy resins mainly comes through diet is an organic compound with the chemical formula (CH3)2C(C6H4OH)2[6-8]. It is part of the bisphenols group of chemical compounds with two hydroxyphenyl functionalities. It is a colourless solid that is soluble in organic solvents, but poorly soluble in water. Many studies also have shown that BPA has estrogenic activity in several in vitro and in vivo preparations [8-10].

Monosodium glutamate, also known as sodium glutamate or MSG, is the sodium salt of glutamic acid, one of the most abundant naturally occurring non-essential amino acids[11-13]. Industrial food manufacturers market and use MSG as a flavour enhancer because it balances, blends and rounds the total perception of other tastes. Many experiments have been carried out which have shown the harmful effects of excessive intake of MSG on the development of seminiferous tubules as well as the spermatids[14-15].

The tetracyclines are a family of antibiotics that inhibit protein synthesis by preventing the attachment of aminoacyl-tRNA to the ribosomal acceptor (A) site. Tetracyclines are broad-spectrum agents, exhibiting activity against a wide range of gram-positive and gram-negative bacteria, a typical organisms commonly given in treatment[10, 16].Many studies in the past indicated that when rats were administered a significant amount of Tetracycline on daily basis the animals showed a decreased level of testosterone ultimately affecting the development of the leydig cell. No direct relationship has been observed till date on changes in the humans but many studies are being carried out to study the detrimental effects of tetracycline on human sperm cells and its DNA[17] (fig.1). 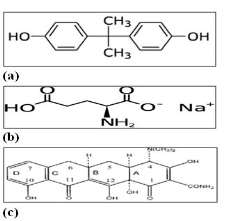 Sample analysis was done for the healthy men between the ages 25-30 yrs. The inclusion criteria were only healthy men with the age between 25-30 yrs considered. On the hand exclusion criteria of the male were they should free from various diseases like Diabetes, Blood Pressure, Tuberculosis, Sexual Dysfunction & Cardiac problems.

Sample preparation: 10 semen samples of perfectly healthy male were collected at a collection centre in a sterile jar and were brought to the laboratory. Direct swim-up technique was utilised for preparing the sperm cells for the analysis[18]. The sperm debris including the dead sperm cells was removed prior using by centrifuging the sample in a Phosphate Buffered Saline (PBS) medium at 1000 rpm for 10 minutes[19]. The sperm pellet obtained was overlaid with PBS and incubated at 37oC and the supernatant containing the motile sperms were used for the assay. Effect of heat was comparing with normal cells discussed later in the discussion section.

Physical analysis of Semen: Semen sample were physically analysed after the liquefaction, and viscosity were checked by observing the droplets falling from a disposable plastic pipette.

Vitality Staining: The semen sample was studied for the presence of any unwanted materials using vitality staining test. The sample was mixed and a smear was prepared on a glass slide along with eosin-nigrosin stain and was observed under the microscope at 100X magnification after the smear dried completely. The live sperm heads were seen white in colour while the dead sperm heads were stained as pink.

Analysis of DNA fragmentation using the SCD Test: Slides precoated with 1% agarose were used as a base slide. Final concentration of 15-20 million sperms were mixed with 1% low melting point agarose overlaid onto base slide and covered with coverslip[21]. The slides were kept at 4°C to get the gel solidified and later the coverslips were removed carefully. No reduction was observed, however minute reduction was there maintained with PBS.

Chemicals of different concentrations i.e. 4%, 6%, and 8% (Tetracycline, MSG and BPA should be prepared freshly prior to the analysis). The slides were kept in these individual solution for time 1.5hrs and 3hrs respectively, study effect of heat was made by heating the agar mixed sample containing the slides of sperm the agar bath was heated at 45oC 55oC and 60oC.

Semen Analysis: The result of physical analysis of semen is as shown in Table 1. The semen samples studied were free of any contaminants and appeared normal. The pre and post wash count were also carried out which showed that the semen samples were perfectly healthy. The viscosity and the volume of each sample under study were within the normal range as suggested by the world health organisation standard.

The SCD test carried out depict the effect of the chosen compounds on the sperm DNA which are represented as below.

(A) Effect of Heat:- Sperm sample were subjected to heat treatment in water bath for 1.5 hrs at the temperature of 45oC and 55oC, where normal temperature of 28oC was used as control. The results are shown in fig 2.0.

It was observed that tetracycline causes the maximum damage of about 92.4% after an incubation time

Statistical Data Analysis: The table 2.0 depicts below is the statistical representation of the data obtained after the SCD test. Anova test was applied using t-Test Software (Excel). It shows that the data obtained from the SCD are significant and valid. P=0.05, It was significant at 55°C. Control groups are healthy individuals where sperm cells were preserved and treated at 28°C without additive chemicals (MSG, BPA, and Tetracycline). Samples collected from the normal subjects. The table exhibit that F value of Tetracycline Bisphenol A and MSG are 22.24, 13.435 and 14.405 respectively the observation are significant Thus it can be said that the hypothesis given by the author is correct i.e. It was significant. Tetracycline gives a higher percentage of damage to the DNA of the sperm cells in vitro.

Image Analysis of Damage after the Treatment

The figures.5 (a to f) given were obtained after under a visible light observation. The figures below show the extent of damage caused by the treatment given to the cell after 3hrs of incubation.

The control slide cells have a normal halo around which depicts healthy DNA while the cells seen in tetracycline treated cells lack the halo which shows that the DNA of the sperm cells have been damaged to a greater extent. The slide treated with Bisphenol A shows a less amount of damaged cell in comparison to that of Tetracycline. The least damage has been in the sample treated at 45°C shown by large halos around the cells. Hence from these figures it can be said that the tetracycline treatment produces the highest damage to the DNA of sperm cells. 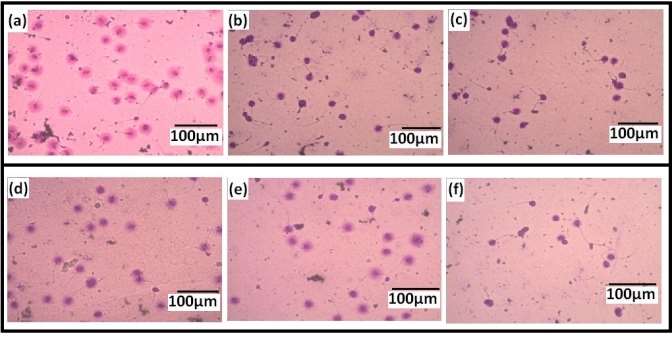 The study concludes that the drug tetracycline used for antibiotics for patients & is proven to cause damage to the sperm DNA along with monosodium glutamate which is a flavour enhancing substance, as well as Bisphenol A which is a component of food packaging materials such as plastic bottles, feeder bottles etc. Though the exact mechanism by which the DNA is being affected is not known it can be said that exposing the sperm with the highest concentration of the above considered chemicals can be one of the many reasons which cause DNA damage which may lead to infertility in the present lifestyle. These observations also lead to conclude that the drug tetracycline is more effective then the others in causing fragmentation of the DNA and hence affecting its integrity.

6.Allard, P. and M.P. Colaiácovo, Bisphenol A impairs the double-strand break repair machinery in the germline and causes chromosome abnormalities. Proceedings of the National Academy of Sciences, 2010. 107(47): p. 20405-20410.

14.Yamaguchi, S. and C. Takahashi, Interactions of monosodium glutamate and sodium chloride on saltiness and palatability of a clear soup. Journal of Food Science, 1984. 49(1): p. 82-85.

18.Parrish, J., A. Krogenaes, and J. Susko-Parrish, Effect of bovine sperm separation by either swim-up or Percoll method on success of in vitro fertilization and early embryonic development. Theriogenology, 1995. 44(6): p. 859-869.