Effect of Sugar on the Melting Rate of (Coke) Ice Cubes

There was constant information coming up about sugar lowering the freezing point of ice therefore shortening the melting time of the ice. This experiment will be conducted as hope to solidify research, Coke ice cubes will be used in the experiment; Original coke ice cubs which contain sugar, and Coke zero ice cubes which contain no added sugar. This experiment will provide more reliable information for scientists for real life applications such as melting ice off roads as faster and easier way, clearing snow off roads or to clear ice for room for infrastructure and construction.

To see the effect of sugar on the melting rate of ice cubes (Original coke – sugar, and Coke Zero – no sugar).

The sugar in the Original Coke ice cubes will cause the ice cubes to melt faster than the Coke Zero ice cubes. This is because sugar lowers the freezing point of water/most liquids. 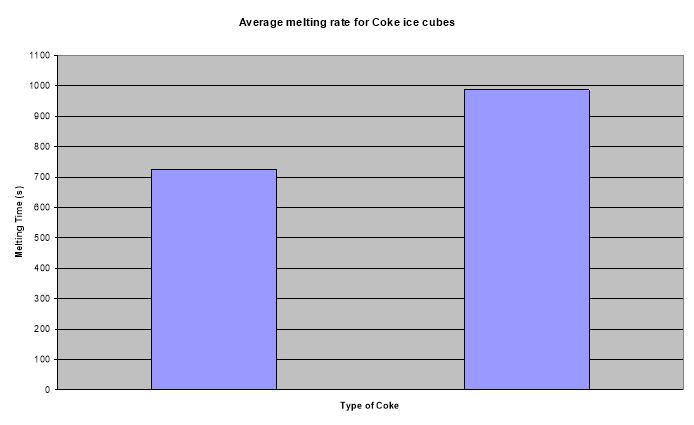 I stated in my hypothesis that the Original Coke would melt faster because of its contents; containing sugar whereas, Coke Zero does not. This is experiment was conducted on the basis of the research on what makes ice melts fastest. Substances that dissolve in water lower the freezing point of the solution. This is an example of a colligative property.

In this experiment, I investigated whether sugar affected the rate at which ice (cubes) melted. The reason I thought that the Original Coke would melt faster is because it contained lots of sugar and the reason I thought the Coke Zero would melt slower (than Original Coke) is because it has no natural sugar in it but instead it contains artificial sweeteners.

On TV or in other countries (because we don’t have ice/snow on the streets in Australia unless you’re in the mountains), trucks are usually seen driving through streets covered with snow or ice, spreading a mixture of sand, gravel and salt on the ice/snow to de-ice the roads (melt the layer of ice/snow on the road). The lowered freezing point because of the poured mixture means that snow and ice can melt even if the weather is supposed to be freezing water. This is an example of freezing point depression (the decreasing of melting point of a substance/molecule). I decided to see if sugar would have the same effect as salt as they are not so different when it comes to their molecular properties.

My results supported that my hypothesis and made my research reliable, The Original Coke melted significantly faster than the Coke Zero (as shown in images 4 and 6) . My results were repeated seven* times in order to obtain reliable data. The graph created from the table of results show the average melting times for each type of coke ice cube, it shows that Original Coke melted significantly (almost 300+ seconds in different instances) faster than the Coke Zero.

The amount by which the freezing point is lowered depends only on the number of molecules dissolved, not on their chemical nature of the substance used because of this, my thoughts changed. Although my prediction2 was correct, I still do not completely know what it was that changed the melting rate of the ice because I do not have scientific grade equipment or a laboratory to conduct a full scale experiment, but I suspect that it may have to do with Original coke having more soluble substances/material than Coke Zero. I could also conduct an experiment to discover the truth behind that theory by testing the evaporation times of each type of Cola. (But that’s for another timeïŠ)

My results show that the Original Coke ice cubes melt faster than Coke Zero ice cubes. I suspect that the sugar in Original Coke caused the ice cube to melt faster. However, freezing point depression depends on the amount of molecules dissolved, and not on the chemical nature or make up of the molecules. Therefore, the presence or absence of sugar in the Coke ice cubes may not have been the reason for my different melting rates.

*Eight times but I messed up my eighth so I dropped it.

2Prediction based on previous research conducted.

1IR thermometer: I got it from a cousin who had it lying around. It’s not scientific grade, it was bought from Bunnings warehouse.