Would the consumption of particular energy drinks affect one’s heart rate and ability to exercise for longer?

Sports science which incorporates the effective use of nutrition and exercise science is now widely recognised in contributing factor optimising athlete performance. It follows that if an athlete wants to train for longer periods and minimise recovery period between exercises then he or she needs to be well nourished.

Many of the body’s metabolic processes involved in exercise are dependent on the components of an athlete’s diet and therefore by adjusting these components, they may be able to change athletic capacity.

Recently amongst many young people the use of energy drinks has become fashionable in addition to the more traditional use of multivitamins to improve athletic performance. Illicit taking of performance enhancing drugs, such as anabolic steroids, is also widely-recognised as a means of achieving rapidly improved athletic capabilities. [1, 2].

Despite these widely held beliefs, there is minimal evidence to underpin the claims of manufactures of these energy drinks that they have any significant effect on cardiovascular efficaciousness and overall performance, in particular that of short duration exercise. [3]

There is no evidence to suggest that water alone is superior when compared to sports drinks in achieving increased exercise duration and capacity although the reverse has often been demonstrated. [1,5,8]

A review of various research articles on the use of energy drinks and exercise performance reveals apparently inconsistent findings:

Ingredients in the most popular sport drinks include caffeine, and the amino acid taurine, which both may impact on heart rate [18,19], Bichler and colleagues [20] investigated the combination of caffeine and taurine vs. a placebo and found it actually caused a significant decline in heart rate. Additional ingredients are carbohydrates, flavorings, herbs and B-vitamins.

The amount and types of carbohydrate found in sports drinks was found to be variable. There were some ‘diet’ energy drinks that had zero carbohydrates compared to some with medium amounts (e.g. Powerade at 3.9g/100ml), and some very high amounts (KX drinks at 9g/100ml).

The capacity of the drink to enhance performance is governed by its carbohydrate content. Simple carbohydrates (a combination of sucrose, glucose, and fructose) have been shown to be absorbed swiftly and oxidised easily to release energy; two factors vital to athletes to improve performance. [5,6].

The body uses carbohydrates to do ‘work’ – it is the preferred material for muscle contraction, the central nervous system and fat oxidisation. The body would prefer to use carbohydrates rather than have to break up proteins for energy. Ingested carbohydrates are digested into the bloodstream in the stomach and small intestines as smaller sugar components mainly of fructose, galactose and glucose. Fructose and galactose are then converted to glucose in the liver and released back into the bloodstream where it is used as required. The brain can only use glucose for its energy requirements. After ingestion of carbohydrates, the glucose levels increase in the bloodstream as per the above mechanism. If the body does not utilise this glucose, the excess glucose is stored in the muscles and liver as glycogen which is initiated by the enzyme insulin released by the pancreas. The human body can only store about 20000 calories equivalent of glycogen. Excess glycogen above this level is stored as fat (adipose tissue).

When the body is exercising, it will use up the glucose as first choice. When the glucose levels have been depleted, an enzyme called glucagon will reverse the above process –turning glycogen back to glucose- and thus glucose levels in the bloodstream will increase. As muscles can only use the glycogen in them – they cannot borrow from resting muscles – so once the glycogen levels have been used, muscle fatigue results. It is thus important for athletes to restore glycogen levels back to their original levels by consuming carbohydrates. The use of a carbohydrate drink should thus aid by increasing the glucose levels directly after absorption from the stomach – typically 20 minutes after ingestion – and keep glucose levels high so that exercise can be done for longer duration. It should also help recovery time as any used glycogen can be quickly replenished.

Another benefit that energy drinks could give the athlete is the restoration of any depleted electrolytes. An action potential sent down a nerve causes the muscle to contract which requires certain electrolytes for it to happen. It the muscle is repeatedly contracted, the electrolytes will become spent. As sports drinks contain electrolytes in them, these spent electrolytes are replaced and thus muscle contraction could happen at peak level.

From the above, it can be reasonably assumed that ingestion of a carbohydrate energy sports drink 20 minutes before the commencement of exercise should enhance the athlete’s performance and also aid post exercise recovery.

Caffeine, a naturally occurring alkaloid also known as trimethylxanthine, is found in coffee and tea plants and acts as an agonist of the central nervous system. Caffeine is also found in chocolate (from cocoa bean) and used as an additive in fizzy drinks. The percentage found in fizzy drinks is relatively small (approx.12mg/100ml) whereas in sports drinks, it is generally a lot higher (approx. 40mg/1000ml).

Caffeine, which has a half-life of between three to five hours, (i.e. the time taken to decrease its concentration by half), is absorbed in the small intestine, then broken down into its components in the liver cell and distributed to body tissues within 45 minutes of ingestion.

Caffeine breaks down into the following components [22]: 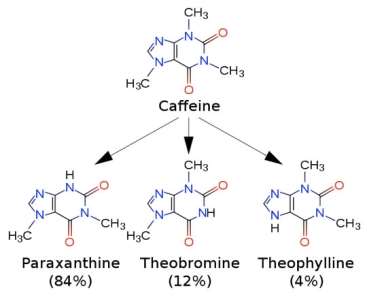 Of the three metabolites of caffeine, theophylline, which only accounts for 4%, has minimal effect on the body. Of the other two, theobromine, formerly known as xantheose, is a bitter alkaloid and causes vasodilation and decreased ADH hormone production in the kidneys and thus leads to increased urine volume. The final metabolite of caffeine is paraxantine,

a competitive nonselective phosphodiesterase inhibitor and a non-selective adenosine receptor antagonist. The effect of paraxantine on the human body is to:

– raise intracellular cAMP (a second messenger)which would lead to increased bloodstream glucose levels. A second messenger is a molecule that relays signals received at receptors on the cell surface to the target molecules in the cytosol and/or nucleus and will sometimes amplify this signal.

The overall mechanism and enzymes that caffeine interacts in order to be broken down are shown below, which is taken from PharmGKB website. [27]: 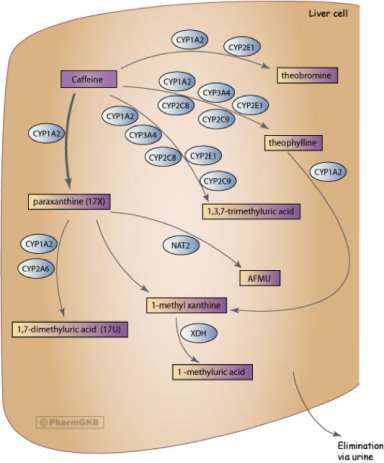 From the above information, it is reasonable to expect that following ingestion of a caffeine drink 20 minutes prior to exercise that the resting heart rate would increase due to the release of adrenaline by the caffeine metabolites. One would also expect the athlete to perform better and recover quicker after exercise as the caffeine increases lipolysis and increased glucose levels. Post exercise the resting heart rate will still be higher as the half-life of caffeine is between 3-5 hours.

Composition of the drinks used in the experiment:

Consumption of carbohydrates will increase the amount of glucose in the bloodstream after absorption from the GIT. This means a temporarily high amount of glucose in the bloodstream after approximately 20 minutes but if resting, this high glucose amount will induce the production of insulin which will convert the excess glucose to glycogen. This glycogen conversion will reduce the glucose levels in the bloodstream to levels prior to the consumption of the carbohydrate drink. Although there is a popular belief that consumption of sugar-containing food or beverages can lead to temporary hyperactivity, sometimes referred to as a ‘sugar rush’, this is in fact scientifically disproven. [28]

ATP (adenosine triphosphate) is produced by almost all living things in their cell’s organelles called mitochondria, and it is one of the nucleotides that make up DNA. It also acts as a cellular signal and the triphosphate acts an energy source for enzymatic reactions. It is not energy itself, but rather temporarily “stores” energy in its phosphodiester bonds. When the third phosphate bond is created, it immediately is broken and energy is released that can fuel the metabolic chemical reactions required by living organisms, which otherwise would be inefficient. This creates ADP which has one less phosphate attached to the group.

An analogy to use with ATP is to think of it as a battery that is getting charged and when it is fully charged, it lets off a spark. This spark initiates the chemical reaction to start to do work in the body.

Caffeine acts as an agonist(stimulant) on adenosine receptors but in a very general sense. As caffeine is a central nervous system stimulant which increases metabolism and therefore, the cellular consumption of ATP will cause the heart rate to elevate. So, post consumption, caffeine increases ATP levels in the body, which causes heart rate to elevate.

To ascertain whether the energy drink affects the resting heart rate: