The fruit fly Drosophila melanogaster known as a model organism is widely used in mammalian cellular and developmental studies. Its vast genome similarity with the humans has facilitated for various genetic and physiological studies. Ayurvedic medicine represents a traditional form of medication used to treat various human illness and anomalies. This paper aims to study the effect of an anti-paralytic ayurvedic drug on the physiological and behavioural pattern of locomotion defective and neurophysiology defective strain of Drosophila. This study will also help us to draw an analogy to the effect or action of these ayurvedic drugs on human system and further lead us to better understanding of the condition.

Drosophila melanogaster acts as an ideal species for model systems and drug interaction studies. Due to its feasibility for culturing and short reproductive cycle it is used in various genetic research prospectives. The drosophila genome on account of its similarity with the human genome can be studied extensively to identify certain genes involved in disease condition and also aid in understanding the various regulatory mechanisms that are associated with it. Study of drug interaction in Drosophila can be very well co-related to its effect on humans and therefore various drug interaction studies have been conducted in various conditions thereby relating it to the genotype.

Drug interaction with Drosophila can be used to study its genotoxic effect as well as any rectifying effect on the expressed phenotype of the organism. Locomotion rhythm and neurophysiology defective mutants of Drosophila melanogaster exhibit both structural and functional abnormality and can be considered analogus to human paralysis condition owing to the non-functioning of neurons stimulating the muscles. The ebony (e11) mutants of drosophila show locomotor rhythm defect along with a defect in the electrophysiology properties of the neurons, muscles leading to the characteristic movement defect. This condition can be related to the paralytic condition in humans and drug interaction with these mutants can be used as a future way for analysis and cure of the condition in humans.

Ayurveda has represented a field of medications and formulations that have been used to treat various human abnormality conditions in India. Ayurvedic medicine represents various treated plant extracts and formulations which contain certain important compounds that target the affected sites in human disorder conditions. These ayurvedic medicines can be considered as an example of medications which have their efficacy related to the genoptypic constitution of the subject. Various anti-paralytic ayurvedic drugs target the neuronal and muscular components of the affected condition. This paper aims at studying the effect of such an Ayurvedic drug on the locomotion and neurophysiology defective mutants of Drosophila melanogaster and relating it to the human complex disorder conditions.

2 types of strains were used.

Drosophila melanogaster of Canton-S wild type strain were obtained from Dr. Kavitha Thirumurugan, VIT University. They were maintained, cultured and outbred in large population in optimum temperature in our laboratory.

The ebony e11 mutants were obtained from NCBS, Bangalore. They were cultured on corn meal medium maintained at 24C. The mutants showed phenotypic characteristics of locomotion rhythm and neurophysiology defective.

The Ayurvedic drug used was Amukkara choorana purchased from a local ayurvedic medicine shop in Vellore in form of tablets .The main ingredient of this medicine is Amukkara or Ashwagandha (Withania somnifera). Amukkara Choornam has an anti-arthritic activity and it is a restorative and nervine tonic.

The e11 mutants were also cultured in corn meal medium with and without out drug of the above mentioned concentration of drug.

To observe drug administration from larval stage, 30 Wild type larva were also culture in normal medium as well as in medium with the above mentioned drug concentrations. The larva were transferred using a thin paint brush and carefully planted on the medium and cultured at constant temperature.

1. Survival Assay:-The wild type and mutant flies were cultured in normal and drug medium for 7days (1 week) and their rate of survival was measured.

2. Climbing Assay:-10 wild type and mutant flies were observed for their characteristic climbing ability in normal and drug medium.

3. Light Sensitive Assay:-10 wild type and mutant files from each category were exposed to a light source for 2-5 minutes and their anti-geotrophic behaviour was observed. 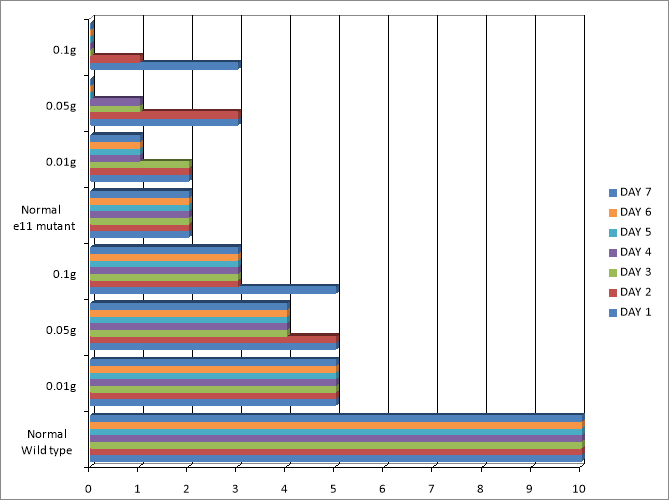 Fig 1:- Graph representing the survibility assay of the Wild type and e11 mutant flies over a period of 7 days cultured in corn meal medium without drug and with drug at 3 different concentrations (0.01g, 0.05g and 0.1g per 100 ml) 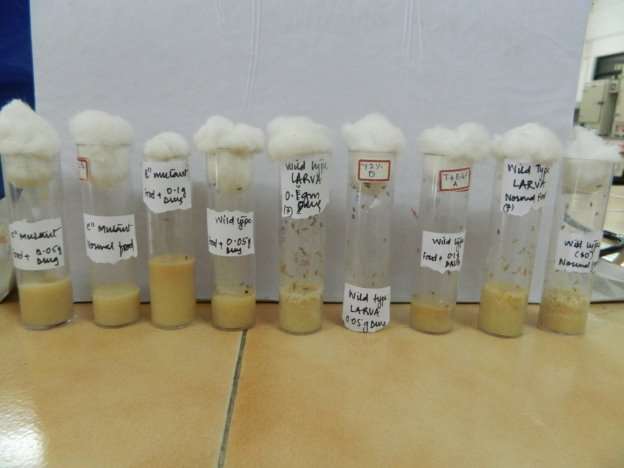 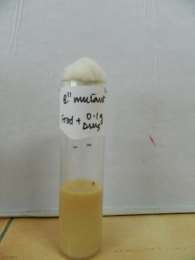 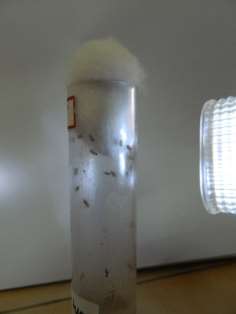 The Climbing assay showed that the mutants in 0.1 and 0.05g drug food showed shibire behaviour and inability to cling to the wall thus inferring muscle weakness before the drug proved lethal. Whereas mutants in 0.01g drug medium showed reduced climbing pace and static movement but had a positive effect on survival rate. Wild type flies in drug food showed no change in initial days but depicted slow climbing rate in later days. But when the drug was exposed from the larval stage, it showed a positive effect on the climbing as well as jumping behavior. Thus it can be concluded that the if the drug is exposed to the organism from the larval stage it produces a better effect as compared with adult stage. Thus it may concluded that incorporation of the drug during the larval stage may produce a curable effect as compared to that during adult stage, but further studies need to be done.

This study aims at finding out the drug interaction with the defective gene thereby drawing an analogy with the human genome. The effect of these drugs on the drosophila genome may provide an analogy as to which gene may be affected in case of patients with paralytic or muscular disorders and may also provide possible means of therapy for the management and treatment of the disorders.